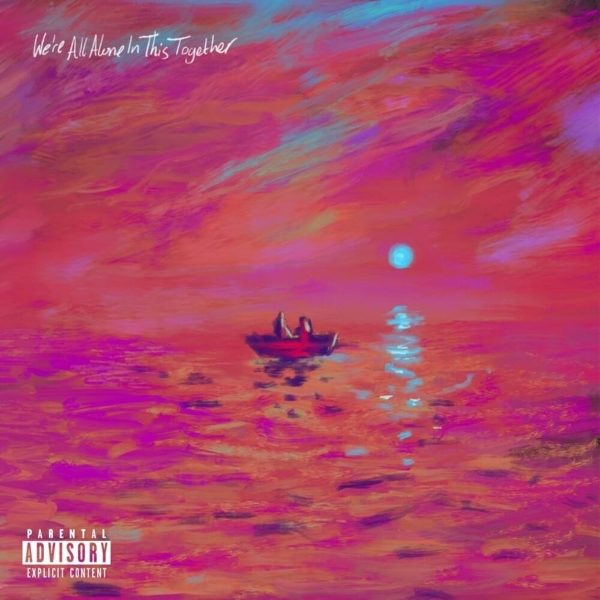 Within the chapters of We’re All Alone In This Together, Dave strikes at the core of his identity, vulnerability, and struggle. Merging the different aspects of his personality: bravado, sensitivity, and the gift of expression, the UK rap scene’s most straight-talking son outgrows his peers.

It feels like the British public have been waiting a lifetime for the follow-up to Dave’s prodigious debut, PSYCHODRAMA. In fact, it’s only been two years since its blue flames ignited the moment and earned the lyricist from Streatham a Mercury Award among other accolades.

With more pressure heaped on his shoulders than anyone before him, Dave does not crumble. We’re All Alone In This Together is crafted in a way that allows anyone to connect with its message. Although his life has changed beyond recognition over the last two years, Dave confronts us with the reality that life for migrants and their children has become unsustainable. Honouring both his home city and the country of his family, ancestors, and peers, We’re All Alone In This Together manages to paint a British history not talked about in the classroom. His selection of features - including Stormzy, James Blake and Snoh Aalegra - is deliberate and woven well into the fabric of this album with some recognisable voices sprinkled in as gifts to more devout hip-hop heads.

Similarly, every standout moment is tied to emotional weight. On “In The Fire”, Dave uses gospel to speak on being tried in the flames alongside some very special guests - Meekz, Fredo, Giggs, and Ghetts. “Three Rivers” shines a light on the lives of migrants, refugees and those who “were broken by the country / that they tried to fix”: the Windrush Generation. With “Heart Attack”, Dave continues to highlight the hypocrisy of racism and profiling by the police and other institutions towards him and his peers: “Man see Blue Story / they're mortified / Man see Scarface and it's glorified / 'Cause when you're black / everything gets scrutinized". We’re All Alone In This Together ends with “Survivor’s Guilt”, a confession and an apology from Dave who has often been scrutinised in the public eye outside of his music. He takes full responsibility and vows to be better for Black women specifically and those that look up to him.

We’re All Alone In This Together truly lives up to the quality expected of Dave’s sophomore album and cements him in time as a fallible but even more forthright voice of UK culture.