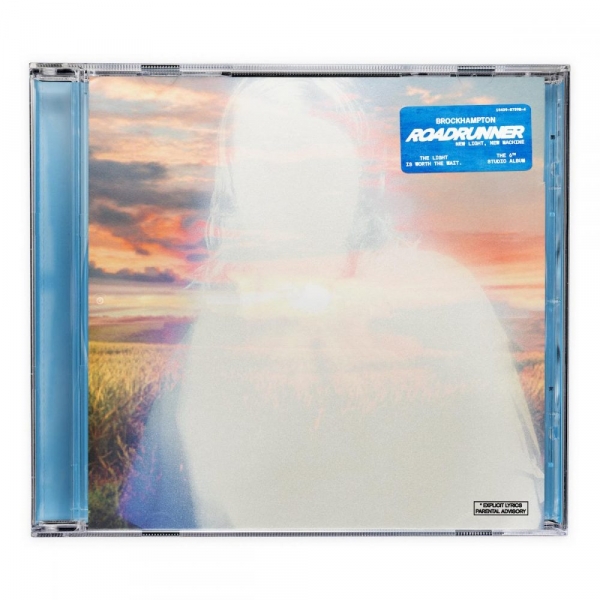 Elaborating on the hard upbringings that lit fire in their young lives, ROADRUNNER: NEW LIGHT, NEW MACHINE is BROCKHAMPTON telling their truth clearer than they ever have before—with the help of some friends.

It’s been nearly two years since 2019’s GINGER and we’ve waited longer than ever for a new album from the vehement Texas outfit. Following two exciting singles; the skin-raising “BUZZCUT” featuring Danny Brown and “Count On Me” with an addictive verse from A$AP Rocky, the group’s aversion towards features seems to have turned into an affinity.

Comparing ROADRUNNER to GINGER, the most obvious changes are the much larger list of names who’ve jumped on to help and producer Jabari Manwa step away from the laptop and into the booth. Manwa’s nack for hooks seems like it’s not just limited to production. His smooth tone compliments every song it touches and offers a whole new colour to the hooks normally commanded by members Joba and Bearface.

Sonically, this album continues BROCKHAMPTON’s unpredictability, exploring their patented blown out heavy sound on “BUZZCUT” before a Wu Tang-inspired lyrical masterclass on “CHAIN ON ME” with JPEGMAFIA. Later on we’re treated to a sun-soaked R&B jam, “I’LL TAKE YOU ON” featuring Charlie Wilson, addictive G-funk on “DON’T SHOOT UP THE PARTY”, an anthemic guitar solo at the end of “WHAT’S THE OCCASION?” and capped off by the acapella and soulful “DEAR LORD”.

The other side to this coin is that like a lot of their albums, it can become disjointed. It’s easy to become lost in how much each member reveals lyrically, but while members like Joba, Kevin Abstract and Dom Mcklennon have no problem bearing their demons and discussing suicide or family members going to jail, other verses barely scratch the surface and almost split the group in two.

“THE LIGHT” and “THE LIGHT PT. II” stand out in this record for that exact reason. On part 1, Joba peels off the scab he’s been scratching at for years, revealing a scar personified by his father’s suicide and their fractured relationship. Abstract trades a verse exploring his relationship with his mother, his sexuality and his experience as a celebrity. The instrumentation switches on part 2 from grungy guitar-led funk to a stripped back melody supported by pitched up vocals, transforming Abstract and Joba’s verses accordingly, putting an unfiltered emotional full stop to ROADRUNNER. Easily the best closer they’ve ever made.

It’s still wild to think we’re hearing A$AP Rocky go back and forth with Matt Champion and Merlyn Wood, or Shawn Mendes singing with Jabari. Despite the group’s meteoric rise to out of this world notoriety, they’ve always stayed away from the stars. It’s a real pleasure listening to the group traverse a new obstacle in working more with external artists. And while this album may lean on them too heavily, this is undoubtedly the same BROCKHAMPTON. If this really is their penultimate album as they’ve announced, it’s laid down the perfect foundation for them to take a victory lap while exploring even more daring worlds in the future.