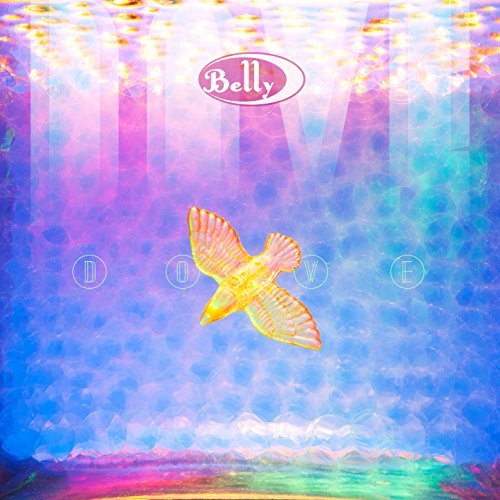 Nineties curios Belly reuniting around an unexpected 2016 vinyl reissue of their 1993 debut Star, which has emerged as one of the more surprising reunions the Gen X alt-generation has offered. Surprising as well, to the band as much as anyone else, was how enthusiastic and stalwart its fanbase proved to be on their international tour that same year. Turned out they weren’t a curio at all, or a footnote, or a one-hit wonder, but a demonstrable thread woven into many of that generation’s musical experience.

Unsurprisingly, then, Belly’s sudden reunion led to songwriting across locales and studio time in a number of New England studios, finally yielding Dove, their first album since what many view as their sophomore slump, 1995’s King, and what practically everyone took to be their swan song. Weighed down by the idiosyncrasies of Star’s at once appealing yet enigmatic folk-inflected indie rock, King’s bright, hook-laden pop tunes never received its fair shake, and those who didn’t readily dismiss it were genuinely – and rightly – bummed that King looked to be the last anyone would ever see of the band.

What of the expectation of Dove, then? Two-plus decades is a mountain of time to pass between albums and its two predecessors were heavily steeped in the culture and stylings of their time. Is Dove the proper Star follow up, offering more of what band-leader Tanya Donelly referred to as “fractured fairy tales”? As Donelly professed years after the fact, in clear hindsight, Star was her “unwrapping each box” of her childhood self-repressions and “clearing out that particular attic space," so it’s unreasonable – and unfair – to expect Star MK II.

Dove is precisely the album that Belly would make in 2018; it’s not Star MKII, or a better version of King – which truly isn’t warranted anyway – nor is it natural third album the band would have made had they never dissolved. Dove is the album four musicians hovering around 50 years of age in their fourth decade of musicianship would make, whether there were ten albums or no albums in between. For this alone, Donelly and company deserve plaudits, yet more are in order for the craftsmanship, emotional complexity, and air of ease the band has brought to the table.

Dove is an album of texture – there is nothing as immediate as “Feed The Tree” or any of Star’s off-kilter, head-rush singles and there is nothing as hooky and bright as King’s “Superconnected” – there are layers and copious amounts of digging involved here. Such is life at this stage and Donelly’s words and the band’s arrangements bear that out from the off, as opener “Mine” flickers and shimmers to life, blossoming into a swirling, churning behemoth. Much of Dove stands ten feet tall in terms of production and sound, even the quieter numbers feature accents galore in the way of strings, multi-tracked vocals, among others, squashing Star’s quaint intimacy and a bridge too far, quite honestly, in some cases.

Donelly touches on children growing up (“Human Child”, “Girl”), dissolution of serious and long-term relationship (“Suffer The Fools”) and wistful reminiscing (“Artifact”) in terms far more frank and economical than any song she would have turned out a generation ago. If there’s any touchstone for these songs, it’s Donelly’s intervening solo career since the mid-nineties, particularly the vault-emptying Swan Song Series project she released across five EPs several years ago. The band’s effortlessness in the face of its long layoff – and despite the ambitiousness of its arrangements – and Donelly’s lyrical straightforwardness seem unchallenging initially, but belie Dove’s complexity.

Donelly's singing of sharing “terrible wine”, weeding a garden, and a long-term ex who keeps pissing her off may seem hokey at first blush, but underscores the plain-spokenness and comfort that develops between a couple over time whose utility carries on even after the embers of romance extinguish. Admittedly, though, it is difficult to not pine for more immediacy and obliqueness, two such defining traits of the band originally. The band does briefly revisit some of its old haunts in the foreboding “Army Of Clay” where Donelly busts out a cracking metaphor with, “see the truth break over your face like a bad egg,” in what could be read as a warning to the current administration, and the bright and punchy “Stars Align” recalling some of King’s sprightly moments.

With Dove, Tanya Donelly and Belly have obviously grown up and moved out of the nineties, and hopefully their devoted fanbase has as well. For those who haven’t, they’d be well-advised to stick with Star and hope they caught the 2016 tour. For those who have, they’ll always cherish that pair of nineties albums that spoke so well to them then, and realize that Dove is capable of speaking to them with equal eloquence in 2018.