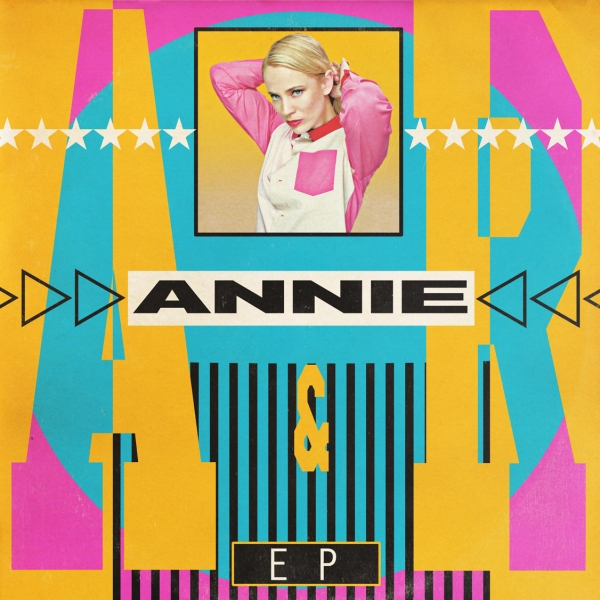 Annie’s new release may be an EP rather than a full album but, hey, with only two long-players to her name in 14 years, Annie fans are, essentially, pop beggars – and beggars can’t be choosers. Besides, this 5-song collection is pretty magnificent.

Hot on the heels of recent 90s-homage single, ‘Tube Stops And Lonely Hearts’, Annie returns with a (slightly) more expansive tribute to the decade where shiny pop didn’t just flirt with dance music, but was locked in carnal frenzy with it. Yet, A&R’s step back in time goes further than this period and also celebrates the late 80s PWL heyday, with more than a mere wink at Sonia and a nudge at Mandy Smith. First track, ‘Back Together’, has a distinct Matt Aitken and Mike Stock whiff to its backing track, and the gourmet chorus cooked up by Little Boots and Richard X leaves you humming it incessantly after just one spin.

Hannah Robinson co-write, ‘Hold On’, is a house-gone-pop anthem, which makes no qualms about borrowing its rhythm section from Raze’s ‘Break 4 Love’ (and, in turn, Sydney Youngblood’s 1989 monster hit, ‘If Only I Could’). Annie’s sweet-sixteen vocals preside over it with a light and loveable mellifluousness and the remnants of Norwegian twist to her English add an extra layer of appeal to the delivery. In the era where Youngblood’s classic went top 3, this song would have potentially gone further and hit the top spot. 24 years later, it stands as a nostalgic sonic nod to that time and, as ever, Richard X’s production is tingling.

With ‘Ralph Macchio’ we are back on S/A/W territory and this could easily be a lost Reynolds Girls or Gayle & Gillian single. It oozes ‘cute’ and takes the sombre-pop tones of previous Annie/Richard X collaboration, ‘Antonio’, and turns them on their head to create a summery love ode to the karate kid. Annie sings: “Kiss me once and keep me forever, Ralph Macchio”. You’ll fall in love with this in an instant – and it’ll also remind you to water your bonsai tree.

On ‘Invisible’, we find a disenchanted post-breakup Annie lamenting the end of the relationship to the sound of a rave track. We say rave – well, this is a Richard X rave, which obviously gives things a 2013 sheen. On an EP of mostly immediate hooks, this one may necessitate a second listen before taking you in, but it grows all the better for it.

While sounding completely different to ‘Back Together’, final track ‘Mixed Emotions’ was blatantly chosen to close the EP as it connects perfectly back into the opener (when – like us – you’ll obviously be putting the whole thing on repeat). They just fit together extremely well. Here, Annie and Mr X can brag about yet another big chorus, which they seem to be able to magic out of thin air with relative ease.

An album-worth of this stuff would not go amiss. It’s not greed, it’s necessity.