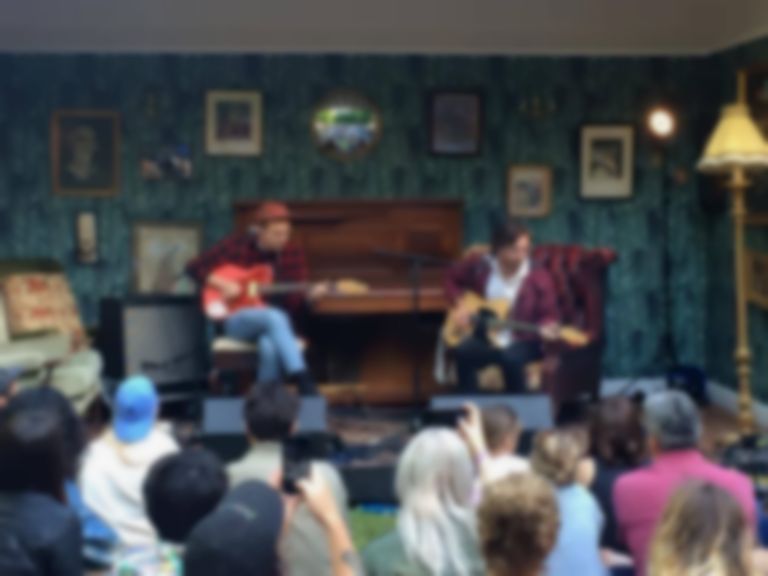 Real Estate took things back to their basics with a secret stripped back set at End Of The Road.

It took a few minor delays for Real Estate to make it here, but make it they did. Performing an intimate set on the Piano stage, Real Estate certainly didn't disappoint.

Playing ahead of their "real set" on the Woods stage, where they promised fans will be treated to their songs in "all their glory," Martin Courtney and Julian Lynch cast a spell that no one wanted to break.

Performing two songs from their latest album In Mind, before ending with a stunning rendition of Days stand out "Green Aisles", the showcase was magic from start to finish.

"You've got to choose the right songs that are going to work with the set up," Courtney told us after the set. "This is a band that really depends on the full arrangements I think, but it can be interesting sometimes to hear the songs more stripped back. It's fun because other things come out."

Appearing at End Of The Road in the middle of a festival season that has seen the band "running around all over the place - all over the world," the stripped back set held as much magic for the band as it did the people that watched it.

"A lot of them kind of blend together and feel pretty similar," Courtney describes of festival season this far. "This one actually feels pretty special. Just judging by the line up and the subsequent days, it seems like it's going to be pretty cool. Looking around, it's pretty beautiful grounds."

"Talking to people that have played here in the past," he continues, "our friend Riley Walker - we were just overlapping with him a little bit - he's played here before and he really loves it. It seems like a good one."

End Of The Road continues tonight with headliner Mac DeMarco on the Woods Stage.