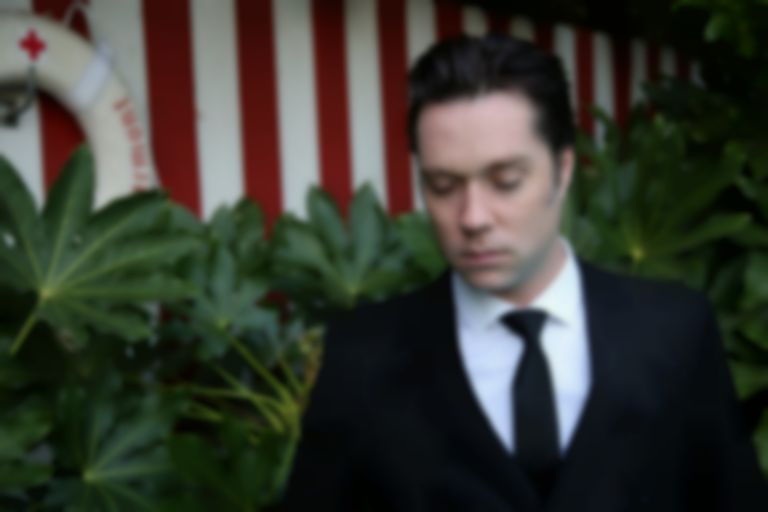 Rufus Wainwright has penned a hearfelt essay to Carrie Fisher, who he saw as "the greatest embodiment of the last gasps of several far more fabulous eras then today."

In a post on his Facbeook page, Wainwright pays tribute to Fisher's sense of humour ("so funny in fact that to try and write about the specifics would be almost unholy and could perhaps stain their sacred nature"), her friendship ("...wise advice in terms of being a father, keeping a marriage going, surviving show business") and her timeless place in popular culture over many decades ("she held trappings of old Hollywood, 60's California freedom and innocence, 70's International decadence, 80's defiant survival chic, 90's dark wisdom and acceptance and finally a bit of where we are today").

Fisher teamed up with Wainwright on his album Take All My Loves: 9 Shakespeare Sonnets - released in April this year - with a spoken-word contribution on "Sonnet 29".

"I'm always talking in Shakespeare's sonnets anyway, and he just happened to be around with some sort of recording device," Fisher told Canadian news website Metro in July. "I'm very big friends with Rufus. And one time, we ran into each other in Australia, and so I was part of his performance that night. (With) Rufus, you sort of play as you go, and so he's always doing some project or other and I'm happy to be part of it…He has such a great relationship with music in different ways, whether it's opera or contemporary musicals or Shakespeare. I mean, who gets involved in stuff like that? He's very inventive."

“She’s certainly a Shakespearian character, that’s for sure,” Wainwright told Gay and Lesbian entertainment website Queerty back in April. “I mean if you’re gonna look through the gamut of possible Shakespearian heroines, she’s done them all! In every sense of the word, whether it’s Titania or Lady MacBeth, she’s had so many different interesting lives… you can tell right away that the darkness within her kind of blooms in that language.”

Read Wainwright's full tribute below or over on Facebook.

Presently I'm thinking of the past. And frankly, between the recent vicious political season and the loss of so many titans in my industry, the past seems worth definitely thinking about. Wouldn't you agree?

This morning my dear friend Carrie Fisher died and the universe is seriously smarting, smarting from the loss of her incredible sense of humor, effortless glamor and absolute kindness. Basically smarting from losing someone truly smart, a rare occurrence these days. I am also sadly realizing that these musings, romantic and sentimental, must also soon abruptly come to a screeching halt. the dream is over and we are now officially firmly headed for the future. And it will be dark without our galactic princess in the flesh. All we have left is the dim hologram.

But still, a bit more reminiscing. not quite ready to face the music yet.

Carrie for me was the greatest embodiment of the last gasps of several far more fabulous eras then today.

In the gilded steel cage of her mind she held trappings of old Hollywood, 60's California freedom and innocence, 70's International decadence, 80's defiant survival chic, 90's dark wisdom and acceptance and finally a bit of where we are today: the utterly insane. All these trappings beaming and luminous.

She brought us into every decade with invincible jewels found along the strange paths of her epic journeys, never hiding them away in a metaphorical safe (safe she certainly never was) and lit the way with these colors, astounding colors that drew us in but also confused us so that we knew exactly where to go, but, were also guaranteed to get lost along the way.

She was also arguably the funniest woman who ever lived. Those countless hours with her in bed half watching old movies (the golden era of cinema was always just a backdrop to our own boudoir performances) will remain the highlight of my laughing career, so funny in fact that to try and write about the specifics would be almost unholy and could perhaps stain their sacred nature, Plus, in truth, a lot of it I can't remember.

It's funny, one would think that I'd have a long list of all the uproarious episodes that occurred, and somewhere in the recesses of my mind I know I do. But it's the touching and delicate moments that come quickly to me now. Her kindness towards my ailing mother, her wise advice in terms of being a father, keeping a marriage going, surviving show business and finally the endless struggle of being an addict.

I remember once lying in bed with her having cavorted and laughed a lot whilst doing the half paying attention to Turner Classic Movies thing, when suddenly A Streetcar Named Desire came on. I instantly witnessed her freeze up emotionally at the sight of the opening titles, a sense of dread filling her beautiful eyes, and for a moment we thought perhaps it wasn't such a grand idea to watch this darkest of masterpieces. But in the end, above all else, she was utterly fearless and together we held hands through the rocky road Vivian Leigh, Marlon Brando and Tennesse Williams so frighteningly gifted the world. I'll always cherish that dark voyage, so intense and so so beautiful.

But let's not focus only on the struggle between darkness and colored lights. Let's also state the truth as plain as the light of day: She was a fierce and loyal friend, staggering intellectual genius and ultimately above all, a devoted and wholeheartedly loving mother and daughter. Despite all the trials and tribulations Billie and Ms Reynolds have encountered and are now so brutally encountering, they definitely know that Ms Fisher loved them fiercely and without any reservations. This in the end is all that matters. This in the end trumps (and I hate to bring up that other last name) everything.

I will end with this, a kind of galactic verbal send off for our deceased alien Princess:

Go forth brave one, may the force be with you. But please, Carrie, leave some of your force behind for us still down here.