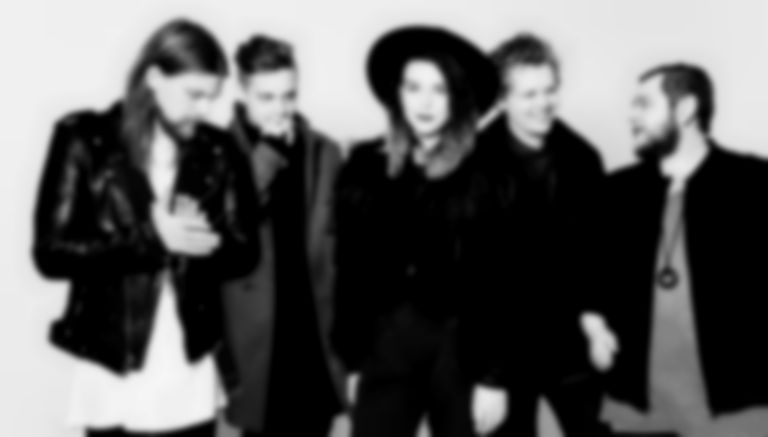 Of Monsters And Men were this morning announced as the Sunday headliners on BBC 6 Music's Latitude stage.

We caught up with Nanna Bryndís Hilmarsdóttir, the co-lead vocalist and guitarist of the Icelandic folk troupe, as they were confirmed to top a stage that includes Miike Snow, MØ, Mura Masa, Jamie Woon, Roots Manuva, and Aurora.

They've been holed up in their home nation for a few months, unwinding and writing. Last year the group released eagerly anticipated second record Beneath The Skin, but as they prepare to play a massive amount of festivals this year, they're already looking ahead...

You're headlining the BBC 6 Music stage at Latitude, which is very exciting - how are you feeling about it?

Hilmarsdóttir: Good! It's very cool and we're very excited. It should be fun.

What are you looking forward to at the festival?

H: We like to walk around, see other bands... just walking around and exploring is really fun. Sometimes you'll be walking past a stage and hear a little bit of a song and think 'hmm, that sounds good', and sometimes you'll see people you already love but had no idea they were playing. I saw Sharon Jones and The Dap-Kings playing a few months ago, randomly while I was walking around a festival, and it was just one of the most amazing shows I've ever seen. It was right in the middle of the day and they had a very small crowd, but she was just being this crazy energy and it was so cool.

We usually don't have time to stick around, but I always try to walk around and have a look when I have spare time... if I'm lucky!

You played the festival a few years ago, in 2012 - what memories do you have of the festival?

H: I think we were playing in this small tent, and I remember we had a moment when our in-ear systems broke – while we were playing – and we had this weird noise coming through. Hopefully it'll be a little bit different this time!

Your most recent tour in the UK was a huge success, selling out most places. What do you think the Latitude crowd will be like?

H: It's funny to see how different places react to different stages in the music – in our first album we had some people listening in the UK, but with our second album there is a lot more. Suddenly we were playing in the UK a lot more! I find it funny how different countries are really into different parts of our music... I like finding it out. But it's very exciting how much the UK is into what we do.

How does Beneath The Skin work live? Which is your favourite song to play?

H: When we started working on this album we really didn't know what direction it would go into. We knew when we came to write the lyrics that we wanted it to be... we'd discussed that were all at a point where we had things we needed to say. That was the place we were in, and we wanted to make it a little bit dramatic.

My favourite to play is probably 'Thousand Eyes'. We usually open with that song and I really like going out on stage to it, because if you are feeling a little bit anxious or something, it's such a great song to go out on... it's a powerful song which just does something to you. I especially like to play that song at festivals. People maybe just know 'Little Talks' or something when they show up, and we play that song and they're so confused! I really like that.

What's next for Of Monsters And Men?

H: We've just had two months off in Iceland, which was very, very, very nice because it put us in the place where we could come down and kind of be ourselves again. Being here now can be very depressing... it's dark and cold and snowing... but it is also cosy, and we feed off the environment creatively, so it has been nice these past two months to be at home writing a lot. We are thinking about the next album, and I have ideas in my head for when I'd want it to come out... but I don't know. It's unpredictable...

Of Monsters And Men headline BBC 6 Music's stage at Latitude on 17 July. Tickets are on sale now.