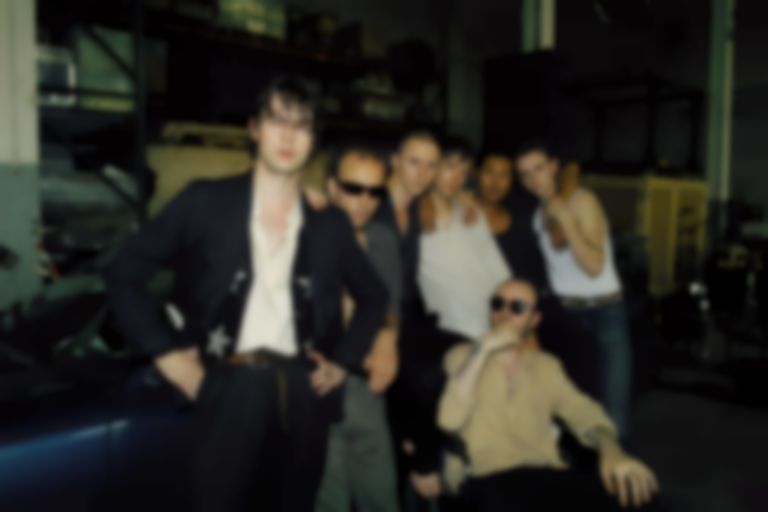 Set for release later this month, Marching Church’s Telling It Like It Is - the follow-up to last year’s This World Is Not Enough - all but completes lead singer Elias Bender Rønnenfelt’s metamorphosis from an angst-ridden caterpillar to a soul-loving butterfly.

The album sees Elias team up with his Iceage bandmate Johan S. Weith, who adds an electric viola and guitar to a line-up which already boasts the rhythm section of the recently disbanded Lower - that's Kristian Emdal on bass and Anton Rothstein on drums - alongside Jakob Emil Lamdahl on trumpet and Hand of Dust’s Bo Høyer Hansen also on guitar.

Immaculately produced by Escho’s Nis Bysted and featuring a scattering of flutes, strings and saxophones, Telling It Like It Is stands tall as an incredibly grandiose, accomplished and ambitious affair that manages to numb the occasional growing pains that plagued This World Is Not Enough. We caught up with Elias to see if he really does tell it like it is.

Are you now prioritising Marching Church over Iceage, or do you see it purely as a side-project and as a means of experimenting with your sound?

I think both of these projects can co-exist without either of them having to be reduced to a mere “side-project". In a way, they have become a power to enable each other, as when one well is drained, the other will be there, filled to the brim with new waters. It’s fairly obvious, by now, that Marching Church has become a fully-fledged music group.

Your vocals certainly seem to be developing a lot - you even use a falsetto on “Lion’s Den” – but would you say that you’ve been specifically focusing a lot on expanding your vocal range or has it just been a natural evolution?

I never did any particular vocal training for the falsetto, I just discovered that I was able to do it. Having spent the last few years having to sing all the time probably did some improvement too. You live and you learn.

You’ve recently advertised on social media that you’ve been looking for work in New York, did you manage to find anything? And do you feel like being financially strained has had an effect - either postivie or negative - on your creativity as a songwriter?

I was hanging out in Detroit and, after missing my plane back, I hitched a ride to New York. Having an empty bank account and about five dollars cash to my name, I found myself in the somewhat desperate situation of having to conjure up some fast money. Luckily, New York is one of the better cities to hustle in. I don’t think financial instability really does a whole lot to my songwriting beside acting as major inconvenience.

What was the idea behind the back-to-basics artwork for Telling It Like It Is?

Well, it’s basically just my mug acting as a figurehead for the album and it was shot in this old gay discotheque in Copenhagen.

And is the album’s title as tongue-in-cheek as it seems or is it a serious statement of intent?

I think the blunt and impartial nature of the title goes well with how the album comes across as a whole. Yet, it is without regard to the album having a fair amount of political content. To be perfectly honest, I liked how having that caption underneath my face on the album cover creates a feeling of a certain obnoxious unlikabilty, while at the same time being sort of bold and difficult to ignore.

You mainly played songs from this album during your last visit to the UK earlier this year, suggesting that they were written a while ago. Have you already started working on your next project?

There are certainly ideas in the making, but I think it’s best to let people wait and see.

You’re coming back to the UK soon in support of the album’s release, but you once said that you don’t find touring very inspiring - is this still the case?

While I have a genuine need and love for playing concerts, the logistics surrounding tours can sometimes get exhausting and debilitating. In the end, however taxing it is on body and mind, it is a very fulfilling pursuit. That being said, the delirious vacuum you enter on longer journeys, combined with a general lack of privacy, makes it nearly impossible to get the focus required for writing anything that resembles a finished piece of work.

Marching Church play London's The Victoria on 14 November and Brighton’s Green Door Store on 15 November. Tickets are available. Telling It Like It Is will be released on 28 October via Sacred Bones Records.