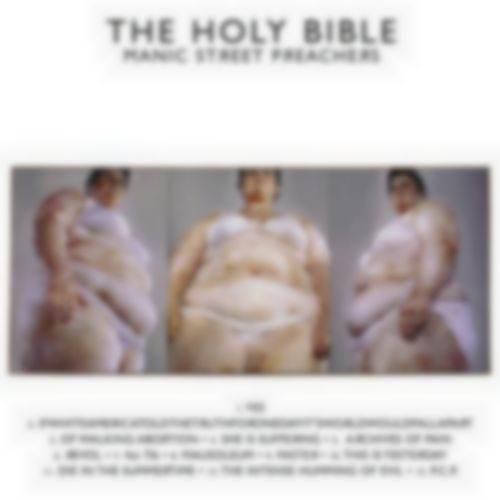 They may not have noticed, considering they just released their eleventh studio album last month, but the Manic Street Preachers’ most-loved record The Holy Bible turns 20 years of age in 2014. When asked by Lauren Laverne recently if they had any plans for a 20th anniversary reissue for the release, the Welsh band discussed such possibilities.

The album was previously reissued for its 10th anniversary, with a 3 disc set featuring the U.S mix and more, but now it looks to get another additional outing.

” might have a plan because we’ve definitely found a lot of Holy Bible material that we didn’t know we had,” frontman James Dean Bradfield told BBC 6 Music recently. “I don’t mean music, but pictures, notebooks and that sort of thing.”

Lyricist and bassist, Nicky Wire added: “We’ve wrestled with the idea of doing a gig playing the whole of , but I’m not so sure. I’d like to do it at Glastonbury actually, I really would.”

Listen to the segment here. The comments were made during the Manics’ gig at Maida Vale earlier today as part of this week’s 6 Music Live series at Maida Vale sessions.

You can watch and hear highlights this evening on BBC Red Button and via the 6 Music website. The band’s new album, Rewind The Film is out now.