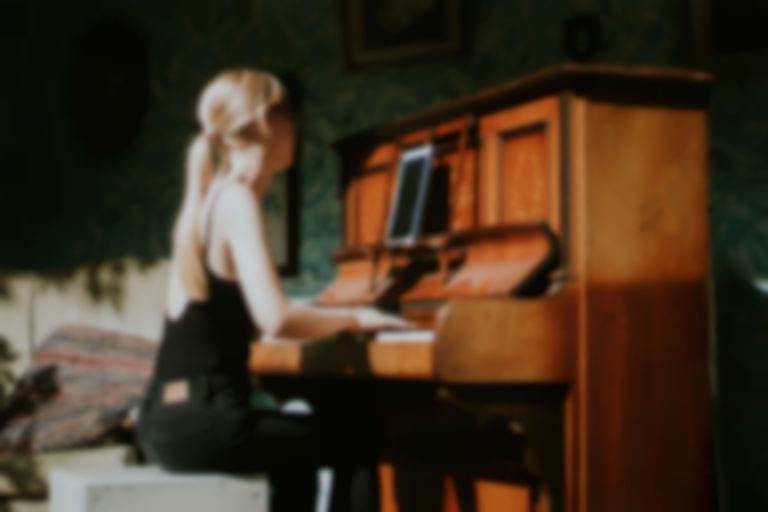 Following her secret set at End Of The Road 2019, Kelly Moran reveals some details about three of her upcoming projects.

The Warp-signed pianist played at End Of The Road's Big Top in the early afternoon, then performed a few songs at Best Fit's Piano Stage as a secret set.

Speaking about the Big Top performance, Moran said, "It went really well. I was very worried about it because normally I play sets with a grand piano. For festivals I wanna be a little more versatile as a performer because not every gig is going to have a grand piano. So what I did back in November was I sampled every single note of my prepared piano multiple times at different velocities so that I could create a digital instrument so that sounded exactly like my prepared piano, and it was successful, so I’ve been doing a few shows with them, but it’s always scarier doing these shows because there’s more technology involved, so I was a little nervous. I think it went really well today so I was very happy with the first set. Once it was over I just felt so relieved."

On her more intimate and secret set at the Piano Stage, Moran explained, "I recognised some faces, like people who had gone to my show earlier, and I was like "Oh, these are the hardcore people", so it was nice to know that there were people who were actually interested. I was like "round two", and it was really nice. It’s always nice to get to play an acoustic piano, especially as it’s so rare to play piano outside, so that just felt really special to be at one with nature."

As well as discussing her performances, Moran revealed some information about her upcoming projects that will follow on from her May EP Origin, "I have a lot of projects coming up right now. I’m not sure how many I’m allowed to talk about, but there’s one thing that I just finished doing that I’m really excited about, which is a split that I’m doing with another artist that will probably come out in December."

Moran also gave some details about the other projects she's working on, "I just wrote a lot of new material for that that I’m super excited about, and then I have this piece that I’m doing for the National Geographic Society that uses bat sounds, and ever since I started working on new music I’ve been working a lot with loops and stuff that’s a little more rhythmic, so I feel like with Ultraviolet everything was so loose and unmetered, so it’s nice now to be in a direction where everything is rhythmic and it kinda makes me want to dance a little. It’s nice to be moving into something that feels completely new for me. So I’ll have that split [project] later this year and I’m working on my next record and trying to get it out next year, but we’ll see."

End Of The Road continues today with sets from Parquet Courts, Michael Kiwanuka, and Mitski.