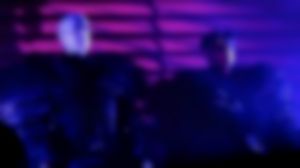 An early afternoon slot in the baking heat has Josh Tillman adding a grumpy element to his self-aware audience put-downs as he runs through tracks from I Love You, Honeybear. He trolls Mumford and Sons, calls out the crowd at the front of the stage for watching the performance through their phones and wryly comments that Sweden is the home of American pop music, gently poking fun at super-producer Max Martin. In between all that, FJM was routinely brilliant and ended his set with a more raucous and unhinged than usual version of "The Ideal Husband".

In the Linne tent, Kathleen Hanna casually cemented her position as a legend of music during The Julie Ruin's triumphant and fun set. There are few artists who can run on the spot - with a little bit of dancing thrown in for good measure - for an entire set and look as cool as all heck. On the Azalea stage Sweden's own pop starlet Tove Lo could take some hints from Hanna on stage presence; Lo has the hits to call on, as "Not On Drugs" and "Talking Body" can attest to, but she lacks a bit of dynamism to take a good performance on to being a great one.

Two acts who know all about great performances are Ms Lauryn Hill and Pet Shop Boys; Ms Hill has the audience worried at first as she appeared to be a touch stressed over the sound levels, and given her well-documented recent problems - onstage and off - there was a worry her set would end in disaster. However once the teething problems passed, Hill showed us she's still got bags of class and magic, delivering reinterpretations of her own and Fugees classics with a voice that's still one of the best in music. And of course Neil Tennant and Chris Lowe brought the spectacular day-glo visuals to the Flamingo stage as they treated the crowd to a greatest hits set while dressed in oranges and pinks, surrounded by costumed dancers, lights, confetti, the works.

Today is the final day of the festival and highlights come from Sun Kil Moon, Run The Jewels, Ellie Goulding and First Aid Kit.