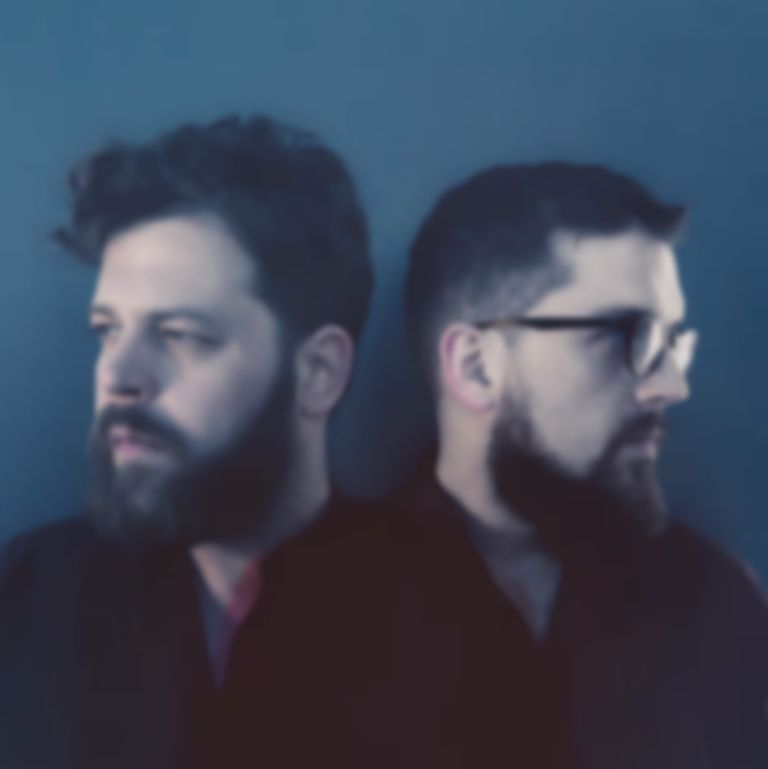 Bear's Den are back with news of LP2 and a new single called "Auld Wives" - we spoke to the band to find out all the details.

Now reduced to a duo of Andrew Davie and Kevin Jones, Bear's Den are gearing up to release Red Earth & Pouring Rain, an album full of surprises. But it's not just the record - they're getting ready to embark upon a jam-packed summer of touring at festivals across the UK and Europe.

With electric guitars, synths, and a fondness for '70s and '80s rock, Bear's Den come up with something that sounds thrillingly fresh on Red Earth & Pouring Rain - they're not worlds away from the likes of "Agape", but there's lots of new ideas to sink your teeth into. It's definitely a new side to the band, and one they can't wait to show the world.

Listen to the first taste, "Auld Wives", below, and read our chat with Andrew Davie afterwards.

Could you tell us about the album?

We recorded it from November 'til January with Ian Grimble, our producer. We're so excited that it's going to be coming out, there are some new elements there... it's been an interesting journey. It's been an adventure.

People that are more familiar with your folkier side – how do you think they'll react to this new direction?

It's still very much us, but the songs are wearing different clothes. There's a lot of acoustic elements still, just a few other things as well – I really care about what mood we're creating when we're making music and with this album we wanted to make a very particular mood. These new elements have let us do that.

“Auld Wives” seems like the most drastic example of this new style. Is that why it was chosen as the first single?

Pretty much since we started working on it we were felt it captured that 'mood' of driving through the night – that image we wanted to create. It's a bit new for us, but when I first wrote it a couple of years ago, it was on the guitar – it was quite folky. But then we spent a lot of time messing around and pulling it into a different headspace, and thinking about people like Stevie Nicks and songs like “Edge Of Seventeen”.

How did it come together in the studio?

We kept trying to make sure we got something robust. Big, strong, and something perhaps more aggressive in the bass and guitar parts. Julian, who used to play horns for us but moved onto drums for this album, had this beat that sounded great. Ian was amazing at making that snare sound sound crazy. The horns as well... we tried to make them fade in and out so it sounded like cars passing on the motorway. It had a life of its own!

What else on the album evokes this 'travelling at night' mood?

We used different kinds of vintage synths like the Roland Juno-60, Yamaha TX7... we were using these really cool, slightly nostalgic sounds.

There was also this idea, which features on the album cover, of someone who's trying to move forward with their lives, but constantly looking backwards. Sonically we wanted that nostalgic feel, but we wanted to make sure the lyrics were really rooted in the present... we wanted it to be in the moment but reflective.

What records do you think are great to listen to while travelling at night?

We spent a lot of time in cars and buses driving around through the night. Weirdly, when you're doing that a lot, there are certain types of music that appeal to you more. For some reason, Springsteen and Fleetwood Mac always seem to be the artists we were all drawn to during that time, and we were excited by that kind of music. Rumours by Fleetwood Mac is really strong. I'm obsessed with Darkness On The Edge Of Town by Bruce Springsteen... that's an incredible record, particularly the song “Racing In The Street”. I really like the Tom Petty album Wild Flowers... those three albums for me were massive in forming a relationship with the ideas of this album.

That format of travelling records is pretty classic and American – road trips down Route 66 etc.

When we were playing with acoustic instruments before, in order to create dynamics you had to stop playing or play very quietly/aggressively, but when you're using electric guitars and synths, you can have a drum beat that just goes and doesn't change for the whole song. You can have parts that come in and out through the song to create dynamics in a different way, and that was an exciting way of working for us.

Aside from the sound, one of the other big changes with this record was the departure of Joey.

We'd just come back from Rockfield Studios at the beginning of January, and I sat down with Joey to talk about stuff and he spoke about maybe leaving the band. I think we were all really supportive – I mean I don't want to go into what he said out of respect – but touring is difficult. It's challenging. It puts a lot of pressure on the rest of your life, and it's a lot to take at once. At some point you have to weigh up the costs of touring.

I bumped into Joey at a Sarah Blasko gig recently – I see him all the time! We're all still really good friends, he's a massive legend. You can't really be in a band with someone you don't love a lot... you're all like brothers; like a family.

It was really sad, but it was important to us to keep going with the album. We were doing something that we were really proud of and it would've been easy for us to stop and wait to figure things out, but I think when you're making an album you want to make it in the moment you're in. It was important for that album that we kept moving with it.

Was there ever any question that Joey leaving was the end of Bear's Den?

Personally, there may have been a flickering moment. It's really difficult when you're so excited about making an album, and you've been working hard towards it for a long time... and then something big happens. It could've been easy to lose our enthusiasm. We all got together, with our manager and label as well, and said it can be the thing that derails us, or we can keep moving and figure it out as we go along. It's always been a bit of a journey – nothing has ever been super easy, and it's been testing at times.

You're playing Bushstock again soon for the third time. How are you feeling about it?

I'm really excited. I live about two minutes away from the church we're playing at, and there are so many good memories of the festival. When we first played we weren't really doing anything, and it was such a huge moment playing to so many people, and having it go down as well as it did.

When you've got lots of harmonies and acoustic instruments, churches are incredibly complimentary venues. It's a beautiful church, and it's so close to where I live, and where Kev lives, and we know so many people in the area... it's basically a massive homecoming show. I can't wait.

The lineup's insanely good as well...

Is there anyone you're planning to catch?

Kev went and saw Seramic and said it was the best gig he'd ever seen. I've not seen it, but I'm excited about that one. Haven't seen Matthew & The Atlas since his new album came out, which is amazing, so I'm stoke to catch that. There's so many!

What should fans expect from your show?

It'll be a healthy mix. We're still up for playing everything. Last time we managed to do a video of just the three of us playing “Agape” on a piano, and where we're in a church again I think we'll try something like that – getting away from the microphones.

Red Earth & Pouring Rain is out 22 July on Communion.

The band headline St Stephen’s Church at Bushstock Festival in London on 18 June. They play Glastonbury's Other Stage at 13:20pm on 26 June.