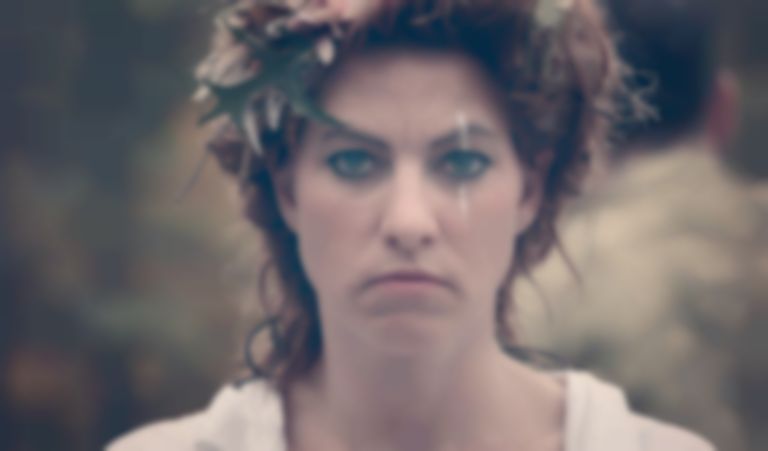 Amanda Palmer has unveiled the visuals for her cover of Pink Floyd's "Mother", which is arranged and conducted by frequent collaborator Jherek Bischoff.

The visuals, shot on location at Opus 40 sculpture park, are "dedicated to the current administration". Palmer scripted the video, which was crowdfunded via her Patreon account, with Jordan Rathus and Coco Karol directing and choreographing respectively.

Bischoff's arrangement of the '79 classic was brought to life by Palmer and a string quartet - a quartet that includes Melissa Auf der Maur (Hole, Smashing Pumpkins) and Zoë Keating, who performs David Gilmour's guitar solo on cello.

"The lyrics to ‘Mother’ haunted me during the inauguration," says Palmer. "There’s a surge in female power right now: Trump and Co. can prattle on about how they're going to build a big, beautiful wall, but the mothers of this nation have a different agenda. We don’t want our children to grow up in a world of fear, separation, and scarcity."

"I’ve made over a dozen big-production videos with massive casts and crews, but I’ve never felt this way on a set before," Palmer continues. "Ever since having a baby I’ve been continuing to work on producing content, and I often bring my baby to recording studios and video sets where it is cheerfully tolerated. But this time it wasn’t just tolerated, it was celebrated. Everybody on the set - from the film crew to the dancers - stood by the spirit of the script. All of the children cast are children of friends of mine. Chris Wells, who plays 'The President', is an openly gay actor and peace activist and it meant a lot to me to be able to cast him in this role."

"Mother" will be released as the physical B-side to a 7" pressing of Palmer original "In Harm's Way", which was created as a response to the global refugee crisis. 10% of the profits will be donated to Because We Carry.

Palmer plays a one-off show at London's Union Chapel on 16 November with Bischoff and a "local string quartet". Unsurprisingly it's already sold out, but you can stream the concert live at Palmer's website from 7.15pm.

The 7" version of "In Harm's Way"/"Mother" is out today via amandapalmer.net.