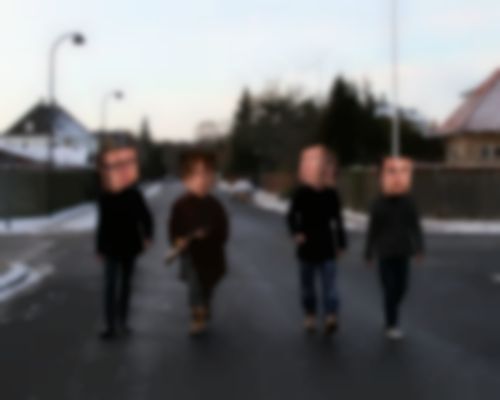 Apparatjik are a supergroup. But they’re no ordinary supergroup. Announcing themselves as a collective, fusing interests in science and culture, it consists of Guy Berryman (Coldplay), Jonas Bjerre (Mew), Magne Furuholmen (a-ha), and producer Martin Terefe.

A quick look on Wikipedia reveals that the bands name is the Swedish word for apparatchik, which is of Russian origin and is used to describe “people who cause bureaucratic bottlenecks in otherwise efficient organisations”. Nice.

The group recently made their live debut in a specially constructed cube at the Club Transmediale festival, in Berlin. On the same date, 01022010, Apparatjik’s debut album was released through www.apparatjik.com.

We have a bit of a World exclusive after that history lesson – a chance for you to hear a track from the amazing album We Are Here.

The track, ‘Antlers’, is an impressive pointer to the entire project. A backwards guitar riff starts things off, it swoops into focus and Jonas’ vocals kick in, this is the warped and glacial pop of Mew, but it feels refreshed by an additional guitar crackling into view… The drums sound almost post-Gothenberg in their tempo and washed out feel, bouncing around and focusing the song in its quasi-pop melody.

Forget the origins of the guys involved. This feels like a lesson in wiping the slate clean, of starting something completely different, breaking free of the confines of chart pop, and trying something new.