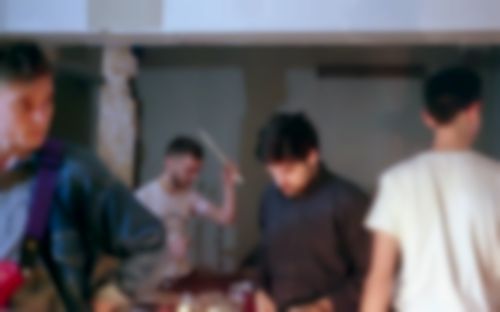 Montreal quartet Ought have mesmerised us with their live shows. Now they’re doing it all over again with “Waiting”, taken from their debut recording sessions.

Back in September last year, during Pop Montreal, I found myself heading up the stairs in a Greek restaurant in the city’s Mile End. All of the tables and chairs had been pushed to one side and relaxed, quiet chatter filled the room as a band set up at one end. The minute Ought struck up the first note of their set, all that changed.

Drums skittered, wiry post-punk riffs clanged from the guitars and low slung bass lines filled the air with a real sense of electricity. People pogoed, danced and careened around the room, drawn in by the bands’ twitching energy and fluid, infectious melodies. Singer Tim Beeler, standing calm at the centre of the storm, shifted from half-muttered spoken words to fervid, throat-shredding howl and back again as the band teetered on the bridge of collapse, before charging headlong into the next number. It was the kind of show that makes you want to go back for more, and, two days later, I did, and had the same immersive experience.

Between then and now Ought have been busy in the studio, working and reworking material for their debut record due for release sometime in April via Constellation Records. To mark the signing the band have released”Waiting”, a track from the sessions that didn’t make it onto the final record. The track goes some way towards capturing the energy of their live shows, surfing on the driving drums and chiming guitars, folding in on itself before shifting gears and exploding back into the chorus. That this track didn’t make the album can only bode well.

It’s our Song Of The Day.