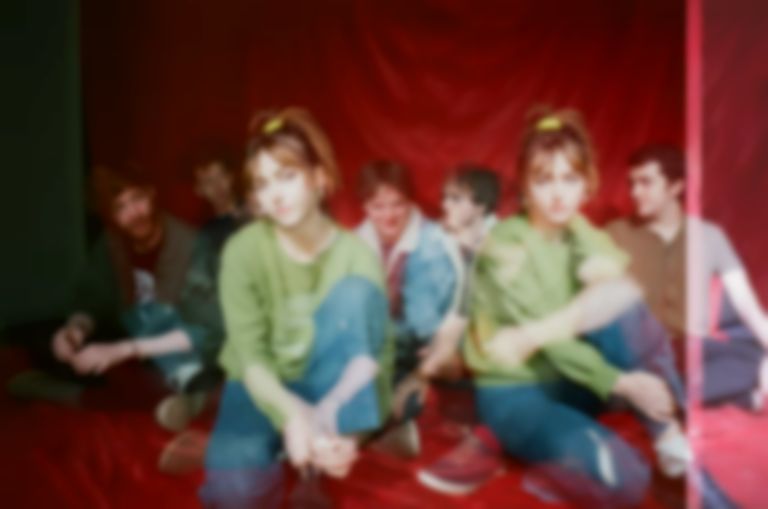 Photo by Pany Inthaxoum
Song Of The Day

C86-era shoegaze was defined by distortion, feedback and obscured lead singers whose vocals were as fogged out by pedals as their faces by haze machines. The same ephemeral principles are at work in Just Mustard’s new single “Seven”, but there’s a clarity and drive calling elements of trip hop and electronics into one big bear hug that makes this their best, most exhilarating release to date.

They were a success story from the support slot for Fontaines D.C.’s run around Europe’s playground; the underdogs within a Choice Music Award nomination (the Irish Mercury Prize) for their critically-adored debut album Wednesday, released quietly last year; they got a co-sign from The Cure’s Robert Smith following a blistering show at The Great Escape, and all of this with a steadfast commitment to their own DIY label Pizza Pizza Records (titled twice after their favourite food). From the headlines surrounding the Dundalk five-piece, you could take a wild stab at guessing what they sound like, and you’d be entirely wrong.

Their new single “Seven” is less literary post-punk than it is Beach House at an exorcism. A swirling Film School guitar line trades on psychedelics like they’re Pokémon cards, while the accompanying beat propels on thumping switchboard rhythms, inquisitively hissing through abstract phrases that claw at the foundations of faith and religion. Katie Ball’s reverb-drenched vocals stick to the phrase “do my head in” as an ominous darkwave hook. For as much as Just Mustard build up Phil Spector’s Wall of Sound with an alarming propulsion, they’ve left a sinister peephole in the middle for us to stare through, confronting the mysteries of another lifeforce, but doing it blind drunk.

The accompanying video is a collaboration between the band's Katie Ball and David Noonan alongside their friend Graham Patterson, itself a homemade thriller, creeping across a red carpet and peering into uncanny still life paintings and optical spaceships. Explaining the visuals, Ball says: “Through the imagery we explored themes of perspective, perception and faith, taking inspiration from the lyrics. Most of the props in the video are things from my bedroom that we made into villains. We were interested in using mixed media in the storytelling, so we included some paintings and made some stop motion animation too.”

“Seven” is out now via Pizza Pizza Records. They play 15 October at Sebright Arms, and you can find their other UK tour dates on Just Mustard's Facebook.