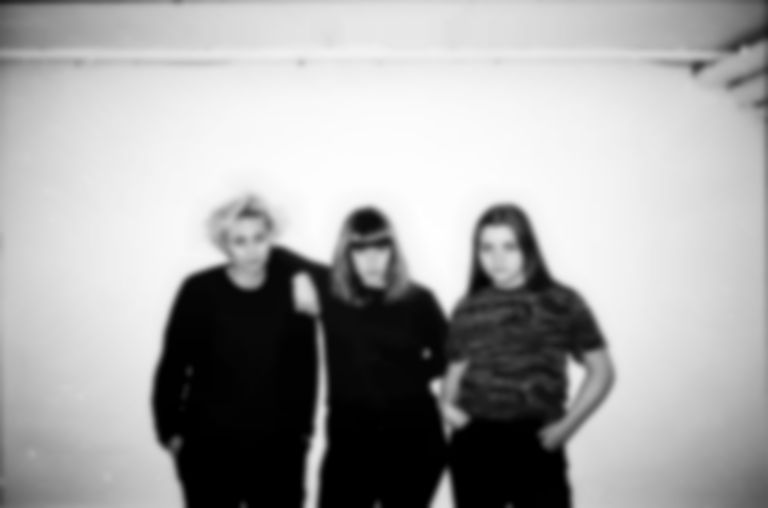 Copenhagen trio Baby in Vain tease pop harmonies from visceral, snarling guitars and violent sounds. We catch up with Lola Hammerich, Benedicte Pierleoni and Andrea Thuesen to find out what they've been up to since last year's break-out SXSW performance, and to get the low-down on the best music coming out of Denmark right now.

You guys first formed in 2010, how have things changed for you since then and what keeps you going/inspired?
We’ve grown older and wiser ... but we still just wanna rock out and shred until it bleeds.

How do you think touring has impacted you as a band?
When you return from touring you just don’t want to eat snacks. There are a lot of snacks backstage. It’s disgusting, but inevitable..

How have the places you’ve travelled, and the people you’ve travelled with had an affect on you?
You never get to see the cities much on tour. You arrive, sound check, dinner, play, party, sleep. But it’s great anyways. Those people you mention are all big influences for us, so meeting them in person has been a really big thing for us.

Everything you create has this kind of grunge edge and riot grrrl snarl, but with a playful pop edge to the harmonies. Do you think that comes from your individual interests and tastes pulling in different directions?
Yes, definitely. We have very different tastes, but a mutual love for certain things. A lot of ’90’s stuff, but also a lot of other stuff from other decades. Haha..

What do you love listening to?
Ultraviolence while high.

You released a split EP with Electric Elephants for Record Store Day this year, what else have you been up to?
We’ve been recording our first album and we have been touring every weekend since april and are playing gigs almost every weekend.

Are there plans to record and/or release anything else this year? If so, can you tell me more?
We or working on getting the album done and that’s pretty much it at the moment. We a headed to the States in late summer to open for the Kills on tour once again, which is very exciting.

What’s the most important thing to you as a band?
Sambuca. The movie School Of Rock. And sticking together sometimes… Haha…

What are you hoping 2015 will bring?
The release of our debut album and some memorable live shows.