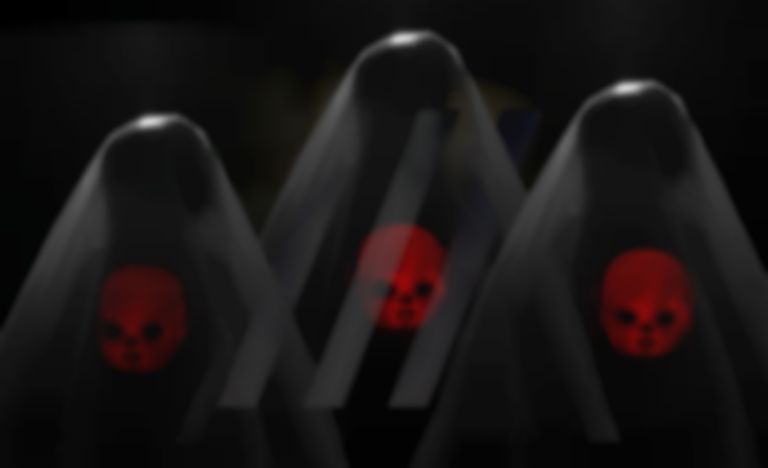 Manchester’s NO CEREMONY/// know how to make an entrance. Within a few months of their inception, early singles ‘Hurtlove’ and ‘Heartbreaker’ unleashed their dramatic post-rave vibe and sparked a cascade of adoration. Diplo included ‘Hurtlove’ on his ‘Best of 2011’ mixtape, while the band enticed Pixies’ Joey Santiago to play guitar on ‘Heartbreaker’. By the time NO CEREMONY/// had played only a couple gigs, they had already been invited to perform a Maida Vale session for Radio One. It’s an impressive start for any artist – and the trance-house of new single ‘HOLDONME’ will only add to the simmering levels of giddiness.

Recently, NO CEREMONY/// played their debut headline show at Salford’s Sacred Trinity church. It was the second time Best Fit had seen the band play, having witnessed their first ever gig two months previously. In the lovely setting of the compact church, the band – who appear to be a trio comprising of two male keyboard/electronics bods and a female singer – thrill a sell-out crowd with a hugely assured display replete with a stunning visual backdrop courtesy of fellow citizens Stay+.

Many of the crowd are straining to see exactly who NO CEREMONY///actually are. The band have provided very little information about themselves. Their stylish website simply provides access to music and videos and, consequently, there is an air of mystery surrounding NO CEREMONY///.

A few days after the Sacred Trinity gig, Best Fit arranges to meet up with Kelly from the band. The venue is the café in a Manchester art house cinema and the interview is quite unlike any Best Fit has ever experienced. Kelly, who is described as the ‘spokesperson’ for NO CEREMONY///, is both engaging and articulate but completely ‘on message’. It’s like talking to a politician – Kelly is determined to convey the simple principle underpinning NO CEREMONY/// - he states the whole interview could be summarised as ‘we just want to focus on the music’ – and constantly circles back to this central tenet. He will not reveal the names of his fellow band mates and when I mention the name of the band he was previously in, things become momentarily frosty (“this is a NO CEREMONY/// interview”).

Even after our tape recorder is switched off, Kelly remains in interview mode. He gives virtually nothing away (bar a liking of SBTRKT). Oddly, the interaction is neither frustrating nor unfulfilling. In some ways, Kelly’s focus and desire to convey the NO CEREMONY/// manifesto is laudable in an age where information levels run overwhelming high. There is something eminently noble about NO CEREMONY/// - it should just be about the music.

The two Manchester shows were great. There was a different singer for each show – what’s the story behind the change?

I think probably the first thing to get across is that we haven’t really announced who NO CEREMONY/// is and it is that way for a reason. Simply, we want to make sure that everyone focuses on the music. As I am sure you are aware, there is not a lot of information out there about us, so who is to say who is and isn’t part of NO CEREMONY///? We are just trying to make sure that everything is focused on the music and the conversation we have with people is with regards to the music.

OK, fair enough. When NO CEREMONY/// formed, did you have an initial vision for what you wanted the band to be?

When we first got together, one of the things that struck us was that we all had a very strong idea of the music we wanted to make and what we wanted to sound like. We have just pursued that.

Did you get to the NO CEREMONY/// ‘sound’ quickly?

How do you decide what constitutes a NO CEREMONY/// song?

There is an agreement process – we all trust each other so much and we had that common understanding right from the get-go. We all have to be in complete agreement that a song represents us. If we agree, it is a NO CEREMONY/// song.

I suppose I’m really asking what type of music did you want for NO CEREMONY///? Why did you choose your kind of ‘euphoric heartbreak’ vibe, for example?

Terms like that are for other people to assign to the music. That one is very nice – I might use ‘euphoric heartbreak’ next time. One of the most interesting things we have heard so far is that while the tracks themselves have their own individual identities, there is a common thread. That’s nice because we don’t set out with an objective in mind for a song like ‘this is going to be a heartbreak song or a four-to-the-floor club one’. We make each song until there is a natural end and if we all really love it, we will put it out.

So, while I understand that you want NO CEREMONY/// to be about the music, what’s the reasoning about being so secretive with even basic information about the band?

The way we set this up – that all people talk about is the music – allows us to put all our efforts into making the music. We are musicians – we want to make music and this is our first really focussed attempt at making music. We are very confident in what it is we are doing and we are very assured about the music we are making. This is a very effective way for us to make music as it allows us to be focused and ensure that every track we produce is representative of NO CEREMONY///.

That is a perfectly valid way to present yourselves, but is there not a danger that some people would like a more personal connection with their favourite band?

Well, we do feel it is far too easy these days to find out everything you want about a band. Everything you want to know is online and you can Google anything about anyone in a few minutes. Our point is that we want our conversation with our fans to be about the music. For instance, I read The Line of Best Fit and I love the site but it doesn’t matter to me who you are or what you do. What matters is the writing – you guys have all got great taste. Similarly, for bands I like, I don’t want to know what they had for breakfast or where they went to school. I just want to listen to their music and make that the forefront of my relationship with them. I think there is something nice about the romance of listening to music just because you love the music.

Okay, I’m sold. Whatever you are doing seems to be working.

Thank you. We’ve been very pleased about the positive reaction we’ve had to the music we have put out. This process seems to be working for us and we want to keep everyone listening to our music. We haven’t gone to great lengths to hide anything – we haven’t played on stage in masks or such like. It’s not about being secretive or mysterious and more of a reluctance to engage. We want to engage through our music – that’s where we put our message and emotion.

So, in terms of the future, how close is NO CEREMONY/// to completing an album?

We are in the process of finishing it and it will be out at the start of next year.

And will you release it yourselves or via a record label?

I guess we will see what the future holds for that. We are very happy with the release method we have got at the moment, but we are certainly not averse to working alongside other people if they understand what it is we want to get out of it and what our objectives are.

Talking about working alongside other people, I am huge Pixies fan – how the hell did you get Joey Santiago to play on your ‘Heartbreaker’ single?

Our manager was on tour with them last year. He took along some of our music, played it to them and Joey took a liking to it and offered his services. It was as simple as that.

I was a little disappointed he didn’t join you at the Sacred Trinity show.

Ha. We were thinking of getting a Tupac-style hologram of him. He was lovely to work with. We’ve done a lot of collaborations and we really enjoy working with people who understand us and have a common goal for the music we are making. Joey was just wonderful with that and understood us from the get-go and then did this brilliant guitar part.

In terms of collaborations, you have already remixed tracks for a number of artists. I really like what you did with Patterns’ new single, ‘Blood’. The song was almost unrecognisable from the original.

Thank you. We tend to do that with our remixes. It’s a trust issue – if they enjoy the music we make, we assume when a band asks us to remix them then they trust us to recreate their song in the way that we would see it. The reactions we have had from our remixes so far have been 100 per cent positive from the bands.

How does it feel the other way – when someone remixes one of your precious songs?

We’ve had our songs remixed and once you let them go, you cannot really have any preciousness about it. You are allowing someone else to completely re-envisage in the way that they see fit. Patterns were very gracious and allowed us to have a free reign. That’s the way we think it should be. If anyone remixes our tracks I can say, on record, please don’t feel any sentimentality to the original song.

Finally, my Smash Hits-style question – there is a very strong aesthetic running through everything NO CEREMONY/// produces. So, what is it with the trio of forward slashes added to the band name?

Ha ha. Well, we have the ability to do everything ourselves with regards to our creative output – we write and record our own music, we do all our own artwork and build our own website. We have a very strong sense of not just the sonic appreciation of what NO CEREMONY/// can be but also the aesthetic of what it is we want to convey with our art and our videos. Certainly, the slashes would be a part of that.

The single ‘HOLDONME’ is out now as a free download here.