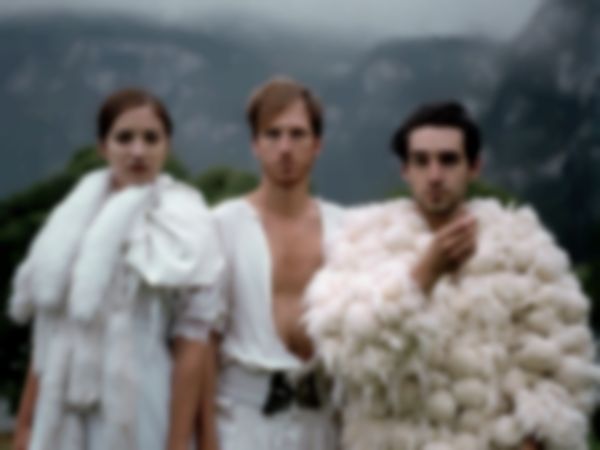 From the moment you first take a look at My Heart Belongs to Cecilia Winter, before even listening to the songs, you know you’re in for something exciting, something romantic. I mean, the name of the band hints at love, probably unrequited, kindled for the first time in formative teenage years. Then you see how Thom Luz, Betty Fischer and Kusi Gerber look: it’s Leda and the Swan come to life through Central Saint Martins. It’s dramatic and theatrical and perfectly matches the grandiose yet incredibly intimate music the band makes.

Some comparisons are made to Arcade Fire, but those appear to be wide of the mark and too simplistic, made just because MHBTCW share an interest in costume and unusual instrumentation. There’s a bit of Beach House in there via shimmering, fragile guitar and organ playing, but then there’s also a huge Spector-esque drum sound (no hi-hat, classy), powerful bass, and Luz’s deeply romantic croon (and lyrics) holding everything together. They’ve already released one album, 2010’s fantastically-titled Our Love Will Cut Through Everything and are currently hard at work on album number two. The band play London for the first time very soon, as part of the excellent Zurich Sounds showcase (we’ve already introduced you to The Legendary Lightness and Evelinn Trouble) so we caught up with them to find out a little bit more about the Swiss trio, starting with the question I think we all really want to ask…

Hi there, I should start by asking about the band’s name, and just who Cecilia Winter is?

Hi there. This is a very good question; I won’t spoil it with an answer.

Can you introduce us to the band?

We’re a three piece band. It’s Betty on bass and vocals, Kusi on drums and Thom on guitar, vocals and keys.

How did you all meet?

We go back years, Betty and Thom were teenage friends, Kusi and Thom met in drama school, years ago. For a theatre piece in 2005, we got together to do the music for the play – that was our starting point.

Alongside your fabulous music, you also look (visually) fabulous. What’s the story behind your clothing choices?

Every band should have a sense for the visual aspect of their music. It helps the concert-goer to submerge deeper into the artist’s universe. Besides that, it’s a protection for us as performers. It’s important to avoid being too private on stage. But we’re not into fashion, privately. Our outfits just grew slowly over time; there was no costume designer involved or anything. One day, a fan gave a dead bird to Thom, Betty inherited an old wedding gown, we stole a huge can of glitter, backstage somewhere…

At first, we were very against wearing costumes on stage, but then we discovered the freedom they offer. And we find it crucial that the outfits don’t look like outfits, but have a natural, organic feel to them.

There’s a theatricality about the band that matches the music; does that come from the acting background in My Heart Belongs to Cecilia Winter?

Yes, both Thom and Kusi are trained actors. But this does not influence the band too much. We don’t “act” on stage. Acting in a play and playing rock shows are two very different things with a completely different set of rules. Maybe our education helps from a songwriters’ point of view, being used to switch roles fast…

Your videos also have a great degree of theatricality and dressing-up; do you come up with the concepts yourself?

Yes. We’re fond of storytelling, and we love to bring our message across via different mediums. But for the future, we’d like to surrender control and just work with video artists and art directors who we fully trust and let them do their own thing with our music.

What influences the sound of the band? It doesn’t have to be purely bands/artists/music, but also art, literature, place, landscape, people….

Well, we were nineties teens, so there’s a good dose of nineties indie in our list of inspiration: Mazzy Star, Smashing Pumpkins and Pavement. Besides that, we’d say our songs are inspired by rear view mirrors, airplane windows, beautiful people, alcohol and the devil.

Landscapes are also very inspirational. I’m quite romantic when it comes to nature; I often want to become a part of a landfill, become a cloud. And with music, I can, somehow.

Our sound developed slowly, we love old gear, reverb… Today, we have some signature sounds that are very recognisable. A celesta played through my old fender reverb deluxe amp, a guitar from a flea market. Betty plays bass through a guitar rig.

There seems to be a balance between youth (‘Eighteen’, ‘I Made You a Tape’) and death (‘Skeleton Bride’) in your songs… can you tell us a bit about what you write about and what influences it?

I am not a conceptual songwriter. I never know what the song will be about when I start a new one. I would not even call it song writing, song-investigation is more what actually happens. Like detective work. A combination of chords emerges from nowhere, mostly connected to some random words, and then I need to figure out what it could mean, and how I could turn it into a song with a storyline that makes sense. And often, the songs find me, not the other way around. And you’re right. Often it’s about youth or death. I don’t know why.

Tell us a little about growing up in Switzerland; I know the showcase is Zurich Sounds but do you all come from there? Was it easy to find music outside of the (family) home?

Betty and I are from Zurich, Kusi is from Berne which is a more rural canton of Switzerland. There was this one music store called Jamarico in the centre of the city where we all went, even before we knew each other. Nothing beats being a teenager and waiting for a new album of your favourite band, and buying it on vinyl . Back then, there was not much going on in Swiss music. This has dramatically changed, there are many very exciting Swiss acts today, touring internationally. And we still buy vinyl.

What does the line “Switzerland is a hell without a fire” refer to? Is there a love/hate relationship with your country?

We sometimes feel that this country is not like the real world. Everything is muffled by these huge piles of money, shut-off by the stubbornness of the people who live here for too long. Switzerland is like Disneyland, very clean, a little unreal. But this is of course everyone’s experience. Everybody hates the place they come from, or at least they are suspicious about it – or should be.

I was a huge fan of Franz Schubert when I was a kid. Later on, Radiohead were the first band I got really obsessed with.

You’re currently working on album number two, but can you tell us about the recording of Our Love Will Cut Through Everything? Where did you record? Will this album take the band, or the listener, in a different direction?

We recorded our first album in France, in a little abandoned village close to Dijon. The house we recorded in was an old villa, it was not a studio; we brought all the gear ourselves and worked with the different acoustics of the various rooms. The house was definitely haunted, it was very inspirational, and the album was done in two weeks, and you can feel the special atmosphere of that house when you listen to the album. We recorded in the attic, the cellar, outside under the weeping willow tree.

For the second one, we went to a proper studio, because we wanted to be more flexible in the mix, making it sound more massive. I think the song writing has definitely evolved; it became more complex, just like life becomes more complex, once you’re not a teenager anymore. Our first album was often referred to as a very youthful album, with a lot of wild mood swings and joyful noises and chaotic emotional states. The second album deals with departures and arrivals. So, in a way, it’s youth and death all over again. Sound-wise we got what we wanted. More ‘Bang for our Bucks’. We like it a lot.

There seems to be a lot of unusual instrumentation used by the band, like celesta and autoharp – are you attracted to these instruments ahead of the traditional guitar/bass/drums.

I believe that there are songs built into instruments. For example, we bought this little toy piano in Berlin, and the first thing I played on it was the main lick for ‘Eighteen’, it just popped into my mind when I touched the keys. Or the autoharp, I saw June Carter Cash play one on Youtube, ordered one and almost immediately, ‘Kingdom oh Kingdom’ emerged. Buying and playing strange, rare instruments is a way for me to get inspired for songs. There are also instruments that are dead, with no songs built in.

Are you looking forward to playing in London as part of Zurich Sounds? Can you tell us about some other Swiss bands we should be looking out for?

We’re looking forward, of course. I never thought I’d get to say “hello, London!” on a rock-stage in my life, but now I do.

You should definitely check out Evelinn Trouble and The Legendary Lightness, but also Nik Bärtsch’s Ronin. We think the selection for Zurich Sounds is a very good snapshot of the Zurich music scene at the moment.

My Heart Belongs to Cecilia Winter will play free concerts at Zurich Sounds, House of Switzerland on 11 August at 6pm and 8.45pm. For more information, click here.