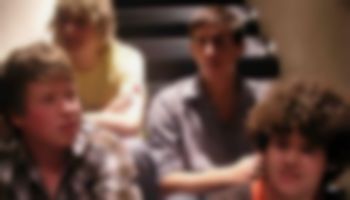 I have a new love in my life. Just don’t tell my fiancee. They’re a bunch of lads from Scotland… so she might not get TOO jealous… but they’ve convened under the title of We Were Promised Jetpacks (quite possibly one of the best band names for AGES), and they create some of most emotive and stirring music I’ve heard for ages.

Their sound finds itself charging through the middle ground of The Twilight Sad’s dense, atmospheric sheen’s of music and Frightened Rabbit’s guitar-pop and meaningful lyrics of real-life problems and moments. They’ve signed to Fat Cat records as well, which suggests that someone knows what they’re doing on both sides. I’ll be honest, since their debut album These Four Walls was sent to me, I’ve listened to very little else. I love the charging guitars, the soaring choruses, the sheer ENERGY that they’ve got going on. It makes me want to drown in their music. Their wall of guitars sounds like a massive torrent of rain – covering every part of your being, drenching you to the core in their atmospheric wall of noise.

Can you recall the moment when you first decided you wanted to become a musician?
There was a time when we first moved to Glasgow (we grew up and went to school in Edinburgh, then three of us moved to Glasgow and one of us to Stirling) and started playing proper gigs in proper venues. Playing in Edinburgh before was weird as we were underage, so ended up playing some odd nights. Which was cool, but when we moved to Glasgow we were of drinking age and we started playing places likeSleazy’s and whatnot. We felt like a proper band, so from about then, probably.

Where do your songs come from? What’s your inspiration?
Really we just try and write a song that’s better than the last one we wrote. I suppose we started trying to write songs that all four of us liked, which was pretty unusual. These days we usually try and do something in particular, like “lets have loads of noise in this one”, or more recently “this make this one really rock and roll!”. In the end they all end up sounding pretty much the same anyway…

Name your Top 5 records.
From a band point of view, stuff that all four of us like:
The Midnight Organ Fight – Frightened Rabbit; Fourteen Autumns and Fifteen Winters – The Twilight Sad; Red Yellow and Blue – Born Ruffians; Boxer – The National; and the new demo by an Edinburgh band calledDupec.

What was the first gig you ever played and was it a success?
The first one was a battle of the bands at our school in Edinburgh, and it was a success!

What one piece of criticism has stuck in your mind and was it justified?
There’s no one particular incident, I don’t think. We’re pretty good at getting criticism, we can take it pretty well. We know we’re not the best band ever or anything like that, so when people say we’re not, we kind of agree! We get more annoyed when the person doing the review has clearly put no effort into giving us a proper listen. Or has just lifted comparisons that they’ve read somewhere else and assumedthats what we’re like. So, we’re fine if you hate us, as long as it’s not lazy journalism!

What one thing has caused you to waste your free time in the past 6 months?
University. It really gets in the way sometimes. It’s been ok though, Fatcat have been great about us pacing ourselves so we can finish off at uni.

If you weren’t making music, what do you think you’d be doing?
Oh, so little. Nothing at all, I’m sure. We’re all still pretty young, so haven’t had to look for a “career” yet. So propably starting to do that.

What’s the worst job you’ve ever had?
Our bassist Sean once worked ridiculous hours at a bottle factory. He’d have to wait by the belt as boxes came along and move them to different positions. It soundedmonotinous for five minutes, but he was at it for hours on end. We woke up one morning when we hasn’t working and found everything nearby at the the end of the room, as he’d moved it in his sleep. True fact!

We’d like you to make us a mix-tape. Pick five tracks with a theme of your choice.
Ok, the theme is “Bands that are our friends, and are completely brilliant and you can listen to the songs on myspace or on the internet or whatever”:
1. Seek Cover – Endor.
2. Sapphire – Lyons.
3. Guts – Over the Wall.
4. Therapeutic Song – John B Mckenna.
5. I can count to twelve – Dupec.

We Were Promised Jetpacks on Myspace