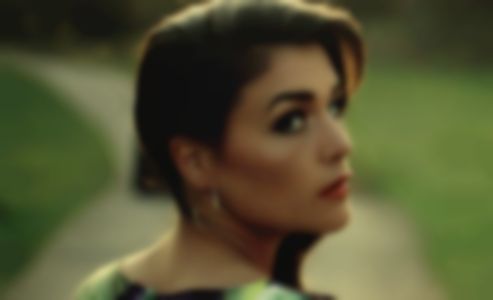 Jessie Ware is telling me about her abs. It’s late morning in an East London café and Jessie is fresh from a personal training session in anticipation of the next day’s video shoot for forthcoming single ‘110%’.

Having first caught the attention of bloggers and fans alike with 2010’s guest spot on SBTRKT’s ‘Nervous’, South Londoner Jessie has charmed and collaborated her way into becoming one of this year’s most praised and anticipated vocalists. And collaboration is the key word here. There was ‘Valentine’, a soft and sweet stunner of a track where she worked with Sampha, and the Julio Bashmore produced past single, ‘Running’, and the Disclosure remix which picked up just as much attention. She’s even played in bloody Jack Penate’s band.

Now, this may all make her sound like pretty big deal; a prima donna in the waiting, but sit in her company for less than five minutes and you’ll be sure that’s not the case. For every name I can drop, there’s a self-deprecating quip to brush it off. Jessie clearly doesn’t realise how much of a diva she can get away with being. But as we sit over coffee and she regales me with tales of still living at home, watching Come Dine With Me, and her mum flaming her youtube critics, I’m pretty glad that’s the case.

But back to tomorrow’s video shoot. “I’m a bit nervous because it’s in a park and it’s in the day” she mulls. “It’s a bit easier when you’re on a stage, however empty that stage was in the first place.”

The video for ‘Valentine’ was a low-budget, subtle affair, but skip forward to the ‘Running’ clip and it’s a whole new ballgame; glamorous and glitzy – Jessie seems a different person. “I know” she smiles. “I just thought fuck it. I wanna be a bit of a popstar. It may be the only chance I get.”

So if the singing thing doesn’t work out, will she storm into a full-blown showbiz rage? “I think I’ll just go and have some babies instead and go and be a music teacher and make them all learn my songs. Like Mr G in Summer Heights High. That’s what I really want to be.”

She laughs loud enough that the table next to us offer glances. “You have to enjoy it. You can’t take it too seriously because I can see how fickle listeners can be. They’re into one thing one minute and that’s fine and that’s cool. If my song stands the test of time, that’s amazing, but I can’t expect too much. It all still feels really surreal and I’m just going to enjoy it, hence the really over the top music videos. I thought fuck it.”

So, are the abs coming out in the new video? Jessie raises an eyebrow, “Perhaps. We’ll see. But the option’s there. It’s a bit more of a light-hearted song. It’s another Julio Bashmore production – it’s the first ever song we wrote together. It’s over a year old and it just feels quite fitting to put it out for now and the summer. It’s cute and I love working with Julio Bashmore, but it’s not part of the saga. I love how I’ve made myself have a saga!”

I suggest that the saga, which encapsulates three collaborations with Bashmore including ‘Running’, deserves its own name. “The Jessie falls in love too quickly saga!” She bursts, as the next door table turns again. “It’s going to be fun. I wanted to have a dog in it…”

Mentioning parks, dogs, and videos in one sentence leads us, logically, to the Fenton Youtube clip. “FENTON! Oh my God, I should get him in. Oh fuck… Guest starring Fenton! No, apparently you shouldn’t work with kids or animals so we’re re-thinking that. I just want it to be a bit light-hearted, wear some nice fancy outfits, look nice, and hopefully Julio Bashmore will make a cameo in it. He’s deciding whether he wants to or not, so I’m trying to persuade him by offering him British bulldogs to sit on his lap and stuff like that. Fingers crossed he’ll make it down.”

Again, there are so many names that can easily follow Jessie’s. I ask if she ever gets sick of being mentioned alongside others. If she ever just wants to be, Jessie Ware? “I’m so appreciative of my journey because I think that I couldn’t be Jessie Ware without the people that I’ve collaborated with, and they’ve really helped shape what I want to be, so I’m happy to be Jessie Ware now, but I love collaborations. That’s why I love dance music and always thought I was going to be a dance vocalist and be a featuring artist. When SBTRKT said when he first put out ‘Nervous’, ‘Oh, it’s going to have your name on it too.’ I was just like, wow. So I’m ready to be Jessie Ware, but I’ll never say no to a good collaboration and I owe a lot to people that have given me a chance and collaborated with me.”

Going back even further, Jessie studied at the esteemed Alleyn’s school in South London alongside the likes of Florence, Jack Penate, and Felix White of The Maccabees. “Me and Felix went to Primary school actually, and we went to Secondary school as well.” She grins, “And I asked him out when I was nine and he said no. But we’re best friends. Jack was in my class and Florence was a few years below… Jack was the first to actually go and just be like ‘I’m going to leave University, I’m going to do this on my own, and then Felix was doing the Maccabees thing and then Jack really, to his credit, showed you that you could do it if you put your mind to it.”

I ask if she ever feels nervous talking about it; if she worries people pin her success simply on her background. “I think, hopefully, my voice speaks for itself. I’m not emulating any of their sounds. It’s very much my own sound I think. And I think nepotism is a very key thing to be honest. Unfortunately, it helps. And it’s nepotism in the most positive way; you meet people, you’re surrounded by creative people, it spurs you on. You meet people through people. I was a backing singer through Jack – he did me a favour but I did work hard, and I sang well, and I feel like I did my job well.”

But it is strange, Jessie’s rise to success takes two usually quite opposing paths; the private school education versus plays and praise from Rinse FM. “I don’t know how I got away with it!” she exclaims with complete honesty. “I was classically trained and I’m on Rinse FM, I love it. I think it’s from being a nice person and getting on with people, and being honest and true to yourself. It sounds so cliché but I’ve just always been so willing to work hard and collaborate and be appreciative of everything that happens so… I don’t know how it’s worked out, but it’s working out all right so far. Maybe people like that posh girl on Rinse FM thing.”

Posh totty, I offer apologetically. “What could it be? Primey..? Goshy..? I’m trying to put Grime and posh together and it’s not working. You know, like Grindie.”

We settle on the decision that Grindie didn’t really work all together, and move on to Jessie’s debut album which is mere weeks away from completion. Alongside the previous productions from Julio Bashmore and a couple of co-writes from lost troubadour Kid Harpoon, the record boasts The Invisible’s Dave Okumu on production duties.

“He’s just so gifted” swoons Jessie with genuine admiration. “Technically, he’s a phenomenal guitarist and musician, and then he’s just got so much soul. He was so generous to me when I was really freaking out about song-writing.”

“He’ll hate me for saying this, but I was really like, ‘I don’t think I can do it, I don’t know what I’m doing; I haven’t got it right yet” and he went, and this is our first time meeting, ‘Jessie… songwriting’s a bit like shitting. You’ve got to let it all out.’ And I was like, yeah, you’re right actually, and I love you for saying it. It made so much sense, in the most crude way. I loved him so much and we’ve become the best of friends. I’m so happy and lucky that I’ve been able to do my first album and have this first experience with him and he’s just nurtured me the whole way and it’s been the most wonderful process.”

Perhaps you can move out of your mum’s house now? “But I like it” she states, deadpan. “She makes me dinner and does my washing. All she wanted was the AAA sticky passes, and now she can have them in abundance.”