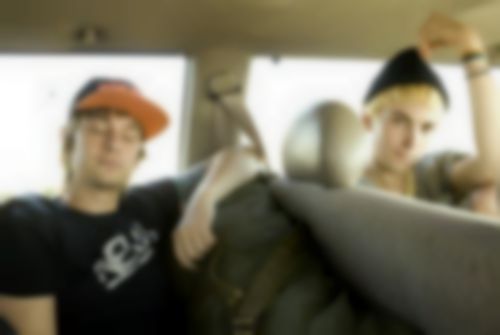 Summer songs, huh? We need ‘em here in the UK, where blue sky and sunshine are little more than a supporting cast to weeks of overcast, drizzle-sodden drabness. No wonder the Beach Boys sound so awesome at this time of year – it’s pure escapism. Shut your eyes and you too can be hitting the California highway, ready to catch both waves and rays. Damn right.

This year’s essential summer soundtrack comes courtesy of Brooklyn’s DIIV, created by Beach Fossils guitarist Zachary Cole Smith during some downtime between tours. Built on shimmering guitar jangles, reverb and breathtaking sighs, it’s slightly reminiscent of its parent band’s swoonsome glide. But don’t be fooled into thinking this is merely some lame side project: debut album Oshin’ is very much its own thing, and it glistens like beads of sweat in the midday sun. Best Fit hooked up with Cole for a few explanatory words…

DIIV was formed when you returned from Beach Fossils tour – did you have a specific vision for the project?

There was no real ‘vision’, the project just kind of formed, initially as a sonic palette, and it developed into a set of songs and a live band that fit with the way the songs were starting to sound in my recordings at home.

Tell me about recording the album – is it true you recorded in a painter’s studio? Do you think that sort of environment was conducive to creating your own art?

Yeah, I did record in a painter’s studio. I also lived in the painter’s studio. There was no kitchen or shower or anything, it was rustic. But I just feel like living in a common domestic scenario is just like this constant routine of survival, like, you wake up and cook yourself breakfast or lunch or whatever, and you take a shower and brush your hair and all this stuff, and you go to work and watch TV and movies and eat snack food and treat yourself like a king all the time, but I really wanted to strip down my lifestyle to the most barebones living experience. I ate literally the exact same thing two meals a day every day for like eight months: rice, beans and kale. I didn’t even have plates, I just had this one little pot I cooked from and ate from. Living like that just bought me as much time as possible to work and focus on it in this immersive way.

You’ve changed the name from Dive to DIIV – was there a particular reason for that?

I dunno, I never really cared what the name of the band was. The original name was definitely part of what inspired the project itself, but once I discovered that there was this European artist who’s been calling himself DIVE since the early nineties, I knew immediately that we’d either have to hire a lawyer and fight for it or just change it. Changing it just didn’t really seem like a big thing. He never gave us any shit about it and plus I kind of dug his music, so I figured whatever.

What were you listening to while you made the album?

Tricia Yearwood - ‘She’s in Love With the Boy’

Black Flag - ‘Nothing Left Inside’

The Cure – ‘Pictures of You’

Yoko Ono – ‘Waiting For the Sunrise’

What’s the one album you wish you could have made?

Shack – Here’s Tom with the Weather.

Tell me something interesting about yourselves.

[DIIV guitarist Andrew] Bailey was my fashion icon in high school and secretly still kinda is. His dad was my math teacher.

Several tracks on the album get as far as a full minute in before there’s any sign of vocals. Is singing important?

Yeah, vocals are definitely not the focus of DIIV; yes, singing is very important, but I try to focus more on using vocals as a texture and as a part of a larger sound than something that kind of rests on top of the music or something that the music is there to support.

Who are your all-time heroes, musical or otherwise?

Are you still involved with Beach Fossils, or is DIIV your full-time band now?

What’s next for DIIV?

I already know what the next record will sound like. I’m escaping NYC between tours and I’m gonna write as much as I can. I always intended for DIIV to be a prolific project – I’m gonna be working as much as I can on the next LP.

DIIV’s debut album Oshin’ is released via Captured Tracks on 2nd July. Catch ‘em at one of their forthcoming European shows: