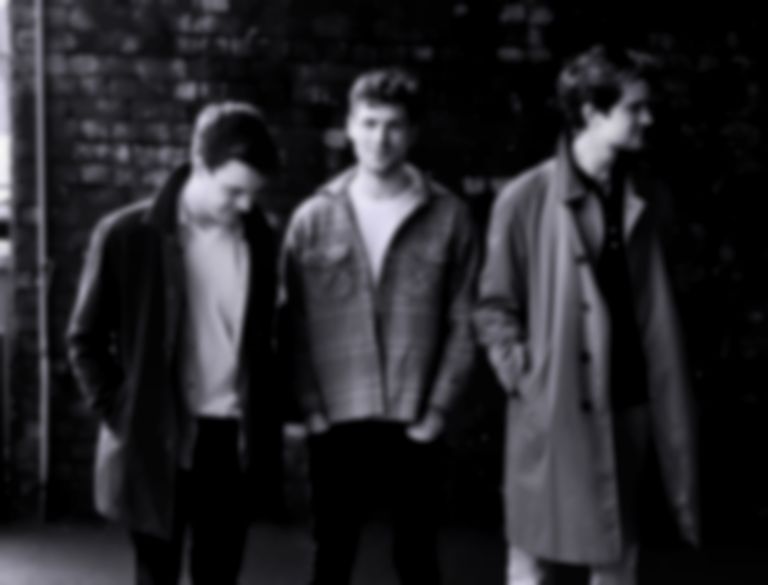 Practice, practice, practice: it makes perfection. These are the things I was taught as a child, striving to be good at at least one thing other than talking in class and watching telly. But no matter how hard I tried, there were always those kids who just seemed to be naturally better. Who could just pick up a pen, a guitar, or a paintbrush and make something… impressive.

I’m pretty sure Jack from London DIY tropi-punks CYMBALS was one of those kids. With their debut album out next month on Tough Love, they’re a mix of shivering and staccato guitars, soaring crescendos and invasive, building vocals that makes their year long life span sound like a fabrication to drop the jaws of naïve journos like myself.

I called Jack for a chat to find him midway through ordering a pint. Even if his musical output is fairly prodigious, his interview technique could probably do with a bit of work…

So, what are you doing? Did you just buy this drink so you’d be at the bar and your phone would ring and you could be like, ‘Sorry guys… Just got to do an INTERVIEW.’

Nah, I’m at the pub actually. I’m feeling a bit rude coz I’m sitting with someone.

Dude, are you on a date?

It’s kind of a date, yeah. It’s feeling more and more like a date… Like a really bad date.

Maybe your date can answer the questions for you?

I was thinking about that. I’ll pass you over in a bit.

OK, so why don’t you start by giving me some juicy facts about CYMBALS?

What sort of facts do you want?

How long have you been a band?

Probably just about a year now.

That’s quite quick, to have a debut album out within a year.

Yeah, I guess so. It has been quicker than any other.

Where you in bands before then?

Yeah, I’ve been doing music for years, making lots of different kinds of things but I wasn’t in London before. I was in Bristol, so it was more, kind of electronic type music.

Can you give me a list of what your previous bands were or is this a mysterious thing?

I could, but less is more.

So how did CYMBALS all meet? Why did you decide to move to London and start up a new band?

Well, we met Dan through a friend and me and Sean used to go to uni together, and then I moved to London and we sort of bumped into each other at a festival.

Do you prefer London to Bristol?

I guess so, yeah. This sort of area, East London, it’s quite a nice little town of its own really.

I think so, yeah, definitely. The label Tough Love are really good at putting out lots of good bands from around here so it’s nice to be a part of them.

Do your friends from Bristol roll their eyes when you tell them you live in East London now?

Ha. Probably. It is a bit different. No comment.

But Tough Love is a pretty awesome label to be putting your debut record out on.

No, definitely. It’s brilliant. And a lot of the impetus came from Stephen from Tough Love who was like, let’s do an album and let’s do it limited, screen printed, all the sleeves handmade and that was his energy. He was the driving force behind that so it was great.

It’s Sinead Evans who’s done the artwork? I had a look on her blog and saw all the photos of it being printed and stuff.

Yeah, it’s proper labour intensive. I can’t believe it. Just the sleeve in itself is a good thing to own.

Well, people do it for singles, where each cover is individual, but I’ve never heard of anyone do it for albums.

I think we just didn’t want to be precious with songs and just get stuff out there. We’re not really worried about running out of songs or anything. We’ve got loads more that we’re still writing and I think we just wanna put stuff out as it goes. I can’t see any reason not to do that.

Also, I saw that you’ve got loads of different people to mix it. Did you want a different feel throughout the album or were they just different tracks you’d recorded in other sessions, shove them together, that’s an album, go?

I think it’s just the point we’re up to so far and a lot of people have been really generous with time and stuff and people we’ve met along the way have helped with mixing. It’s been really good to have D/R/U/G/S and James Yuill and Rory Bratwell and then our friend Jake, all mixing parts of the album. That’s been a nice process, hearing different stuff back from them.

When you work with different producers do you learn different tricks and pick up different ideas from them?

I think so. I think they hear different bits and accentuate them. James has accentuated the more pop, dance parts of what we’re going and D/R/U/G/S has cast quite a funky sound and it’s quite loose so I guess so, yeah.

It’s quite ambitious, but I like it. I watched the video for ‘Summer Escaping’. What’s going on in that? What’s that about?

My date is actually with Olli who was responsible for that.

There we go, let’s chat to Olli then.

Do you want to talk to him?

We were just talking about the ‘Summer Escaping’ video. Did you make it?

Yes, I directed the video.

Was it your idea?

It was based on ideas I’d been developing over the last couple of years, experimenting with green screen and using different materials rather than green screen to create a chrome key effect. And most significantly, UV paint. It’s kind of an extension of my ideas I’d worked out. I thought it worked quite well with the idea of Summer Escaping, with them disappearing, almost like losing part of yourself.

What’s that stuff you’re dropping on their faces? Is it paint?

So, you’re on a little date with Jack right now. Give me some gossip. Sell out your mate.

I don’t know. This is the first time I’ve seen him in a few weeks and as soon as he got here he’s on the phone to you so I’m feeling a bit put out at the moment.

Are they good to work with or are they divas?

They were fantastic to work with. It’s a rare opportunity to get a band that’s willing to spend ten hours with you while you pour green yogurt over them in a confined space. You take those opportunities where you can.

Brilliant. Thanks for talking to me.

I’ll pass you back.

Hey, I promise I won’t keep you too long. I’ll let you get back to your hot date.

Haha, no it’s alright. It was a special bonding experience with Olli.

Olli: DO IT AGAIN!

Why don’t you go out and get some frozen yogurt together in the sun?

Yeah, we should do that, yeah.

What are the plans coming up for CYMBALS now once the album’s come out?

Well, we’re really excited just to see the sleeves and I think there’s talk of doing a special coloured vinyl so we’re pretty excited to see the final product.

Is that a Record Store Day thing?

Before it sells out – limited!

What about gigs? Are you gonna do any gigs outside of East London?

Well, I dunno. We don’t want to do too many. I think the next one is John Kennedy’s XFM night on 8th May.

I think you’ve got one on 16th April at The Victory.

Yeah. That’s the one I’m supposed to talk about more. That’s the one that’s the album launch and I think it’s quite nice because it’s a Saturday night and the other bands are our friends – Ghost Eyes and Pan. And also, we’ll have friends DJing and we’ll be DJing a bit and it’ll basically just be a big party and it’s at The Victory on Kingsland Road which is run by another friend of ours called Matty. The Tough Love nights at The Victory are really fun. It’s quite a lot of nice people together.

Bring your date and I’ll see you there.