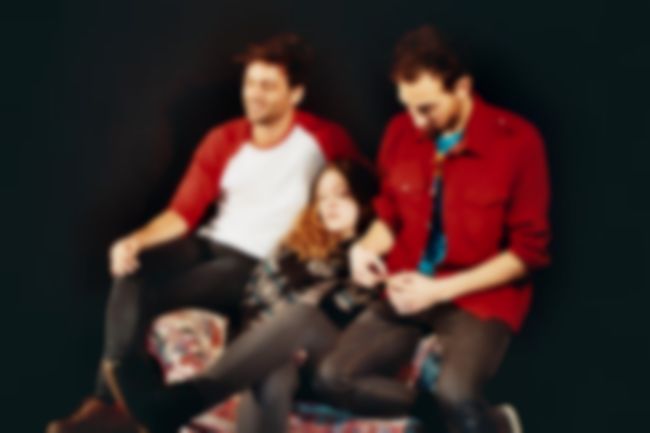 Based in Liverpool but hailing from Norway, Ireland and Brazil, it’s easy to imagine that All We Are have got a pretty good back story. When we then found out that as well as this international line up, the trio had also described their music as “the Bee Gees on diazepam,” we were, of course, pretty intrigued to find out more.

All We Are grabbed our attention a few weeks back by releasing a hazy – slightly trippy, even – visual accompaniment to their latest single, ‘Utmost Good’ - a revelation of soulful, groove-laden pop perfection telling a familiar tale of longing and heartache, all interpreted through falsetto vocals and sumptuous harmonies.

Digging a little deeper, we went on to find out that the band hail from what’s proving to be a very fruitful music scene as graduates of Liverpool’s Institute of Performing Arts – the same school that has recently given us the likes of Dan Croll (also to be spotted in the trio’s latest video) and Stealing Sheep.

The band have been playing together for two years, and over the course of that time, the trio – comprising the talents of Guro Gikling, Richard O’Flynn and Luis Santos - have crafted a style of music which seamlessly blends all elements of each member’s musical talents together. And as it turns out, they’re an outstanding live proposition too.

We caught up with the three piece following a spot at London’s Sebright Arms where they opened up for our favourite Norwegian “bastardized soul” singer Mikhael Paskalev (who also happens to be one of the guys behind Obscenic, the brand new label that has just released ‘Utmost Good’) to find out more about where they’re from, and where they’re planning on going.

Can you tell us a little bit about who you are, where each of you is from and how you first came across each other?

We are All We Are. Luís is from Brazil, Rich is from Ireland and Guro is from Norway, and we met in uni in Liverpool.

What was LIPA [The Liverpool Institute for Performing Arts] like as a place to be a student? What’s the most important thing that you took from your time there? (and did you get to meet Paul McCartney?!)

The best thing about LIPA is it attracts loads of weird creative people from all over the world (like us) who all end up working together. It’s also the reason we are in this city which we dearly consider our home. And yeah, we met Paul a couple of times, he’s a dude.

You all come from different countries and different backgrounds, so I imagine your first tastes of music were pretty different – can you tell us a bit about your musical upbringings, your first favourite artists and what made you want to become musicians?

Guro: I come from quite a creative family so there has always been a lot of music and instruments around. My first band obsession was The Beatles. I had a kid-guitar that I somehow managed to attach to my belt. I walked around in the house singing, what I thought was english, and hammering the poor thing. Thought I was pretty cool…

Luís: When I was just a baby, my dad (a guitarist of course) used to take me to his blues band rehearsals. Later, my mum, in an effort to prevent me from ending up like him, got me into classical and brazilian guitar lessons. That made me a stylistically confused player, which I consider a good thing.

Rich: Being from Ireland there was always music everywhere and all the time… It’s in our blood. When we were kids all we listened to was West Coast hip hop though. A far cry from Irish trad but far more useful now.

What would be the things/who would be the artists that you all bond over? Where’s the point that all of these cultures meet?

We all love stuff that is groovy, melodic and soulful. Although we have different tastes, artists we’ve all been listening to in the car are Frank Ocean, Metronomy, Dr. John, Broken Social Scene, OutKast.

And in the other direction, has there ever been a moment where one of you has tried to bring some musical element from your homeland to a writing session, and the others have flat refused to try it out?

On our first tour we were short a song and on the way to Fusion Festival (Germany) we arranged a percussion-led version of an Irish standard. The audience liked it so much they made us play another Irish tune. Needless to say it. will. never. happen. again…

You’ve just released ‘Utmost Good’ as the first single on Obscenic Records – can you tell us a bit about how you got to know the Obscenic guys, and how you work with them?

We met Joe Wills and Mikhael Paskalev at LIPA, so we were mates before we started working together. Joe produced ‘Utmost Good’, and in the middle of recording he started the label with Mik [and Pete - Spring King] and asked if we wanted to be the first release. We thought that would be pretty cool.

Can you tell us a bit about ‘Utmost Good’ – what’s the story of it, and how did you go about writing it?

‘Utmost Good’ has a pretty universal theme, a lot of people can relate to it. We were just jamming and it felt good.

How did you make it sound so smooth?

We put Guro through a flanger.

You seem to be a band that knows what to do with a good bassline – what would you say is the best bassline of all time?

G: I love when the bass comes in on ‘Black or White’. Sexy.
L: The outro of ‘The Chain’ by Fleetwood Mac. Mmmm-hmmm.
R: The bass line in ‘Prototype’ by Outkast… understated but so bloody slick.

How would you describe an All We Are live performance to someone who’s not yet witnessed it?

We are proud we make the sound we make with only three people and no computers.

How does a typical songwriting session work for All We Are? Do you all have set things that you bring to the band, or is it more open than that?

We write together. It starts with a bass riff or drum groove or guitar stuff and we then we jam and sing.

There’s a really strong scene coming out of LIPA/Liverpool at the minute, with Dan Croll, Stealing Sheep etc… who else should we be keeping an eye on?

Spring King, Circa Waves, Nadine Carina, Bird and Faroe to name a few!

What makes Liverpool such a good town in which to make music?

Loads of great bands around; the Kazimier club is a legendary venue; good promoters like Everisland. It’s a great scene and strong community, something you don’t usually get in bigger cities. There’s a lot of collaboration between artists and we all help each other out. It’s a good time to be living here.

And finally, what do you have lined up for the summer months and where can we see you next?

We are gigging loads, summer is festival season! We are also in the studio with Joe, there’ll be some new tracks out there. We are coming to London on 13 August to play the Huw Stephens night at the Social, that should be really nice. All our gigs are on our Facebook page.

All We Are’s debut single ‘Utmost Good’ is available now through Obscenic and the band will be playing the following live dates: