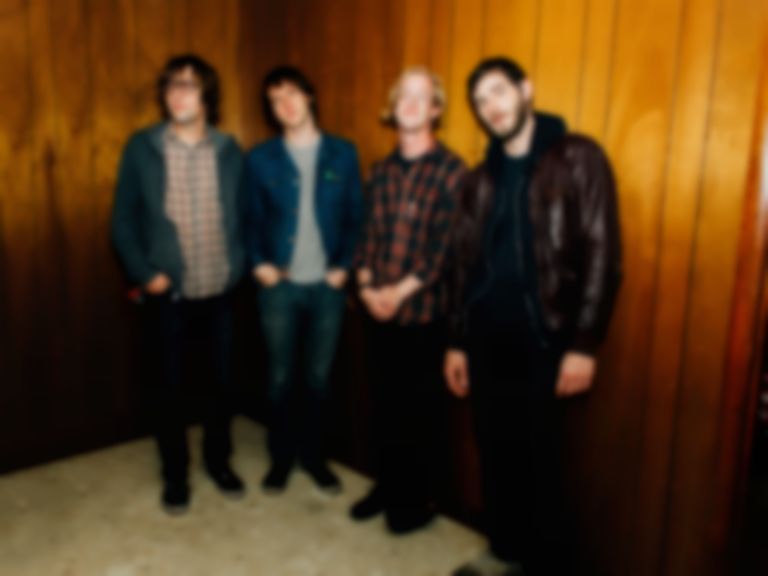 Currently on tour with Into It. Over It. and The Hotelier, West Virginia rock and rollers Rozwell Kid are searching for wide-eyed wonder in their new music video.

Taken from their Good Graphics EP, "Magic Eye" rages with frustration and intensity, driving every forwards towards rambunctiously freewheeling chorus riffs and a soaring sense of freedom.

The video, directed by Sam Gursky, sees two eyeballs stumbling out of bed and blindly feeling their way around a crowded city in search of the right perspective.

What is the song written about?

I suppose "Magic Eye" is about hopelessness and disillusionment with your surroundings and situations, coupled with the regret that stems from awkward attempts at coping with these obstacles, and ultimately the naive and fantastical solutions to which we sometimes find ourselves turning.

Explain the (totally wicked, by the way) concept behind the video?

Sam Gursky (Director) and I brainstormed over the phone, resulting in the basic storyline for the video. I was worried the giant eyeballs would be too literal for the song title, but I couldn't shake the image out of my head. Once we crafted a purpose for the characters, and the narrative became more about a quest than just someone in an eyeball mask walking around, I was very excited about the idea. Sam and I shared references such as The Shining and Green Day's "Basket Case" video, trying to marry the two aesthetics into something different. Sam crushed it!

You've always had some pretty fantastic concepts in your music videos: how important do you think music videos are as an outlet?

I think music videos are the coolest... a red hot relic from the go-go MTV '90s. It is certainly beneficial when a video can help your song reach a wider audience. Therefore, I would categorize them as important, for sure.

You're touring the UK this month: what're you most looking forwards to about playing over here?

It's our first time in the UK as a band (a lot of us personally, as well) so every twist and turn will be a brand new adventure. Thus, I would declare the entire trip will be something to look forward to!

If you could give one piece of advice to bands looking/hoping/about to tour abroad, what would it be?

Be open minded. I was really nervous but it worked out really well and we are having a great time.

Music aside, is there anything/anywhere you're excited to visit/see/be whilst on tour?

This entire European tour has been brand new for us. It's all been amazing and fun and surprising. We've had an absolute blast. We're currently trying to figure out how to fit a trip to Stonehenge into our itinerary.

What are your tour essentials?

What can people look forwards to when they head to see you live?

Just four humans having an absolute blast playing their original indie rock tunes for a crowd of two or more people (at least two people are usually running a venue).

Good Graphics is out now via SideOneDummy Records. Rozwell Kid are currently touring Europe with Into It. Over It. and The Hotelier. Details of the remaining dates can be found after the video.