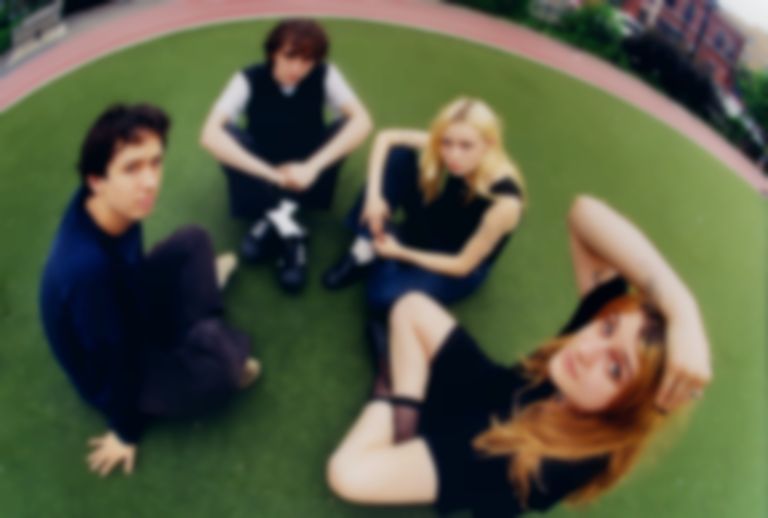 New York-based four-piece Momma revisit the grunge-filtered soundscapes of the ‘90s and early noughties that influenced their first two albums with their latest track “Medicine”.

Garnering a devoted following since debuting with their first single three years ago, the quartet step into the shoes of acts such as Hole and Sebadoh in issuing indie-tinged sweet notes that stream through a melancholic undertow. Spawned out of a friendship forged during high school days, Etta Friedman and Allegra Weingarten, joined by bassist Aron Kobayashi Ritch and drummer Zach CapittiFenton, wind through a combination of idyllic and tumbling textures that fuse coming-of-age nostalgia with honeyed disaffection.

“Etta and Allegra (guitar/vocals) met in high school 7 years ago because they were the only people at school who were really into music and didn’t play sports,” the band tell Best Fit. “Etta was writing music under the name ‘Momma’ and asked Allegra to fill in on guitar for a live show.”

“When they started rehearsing together, it was hard to focus on the songs they had originally planned to play live because writing together came so naturally. After about a year of playing as a two-piece, they met Zach through the LA music scene and recruited him on drums. Aron (producer/bassist) produced the last LP Two of Me, and then last year we all decided to start writing more collaboratively as a 4 piece.”

“Medicine” finds Momma merging mellow vocals with undulating guitar hooks and spare percussion, allied with a downtempo DIY aesthetic that deploys an instant serotonin boost without veering into sentimentality. A VHS-C-shot video taps into the outfit’s lo-fi concept, a mini road movie that hints at the band’s relocation from LA to the east coast, a change of scenery that framed their recent songwriting phase.

“’Medicine’ got its start as a riff a couple of years ago and was eventually brought to the whole band last year,” they explain. “It was really the first song we wrote and fleshed out as a 4-piece band and we are all really proud of how it came out.”

“Lyrically, the song is very different from other Momma songs because it’s one of the first times we couldn’t write about heartbreak. We were both in loving relationships when we wrote it and wanted to write from that perspective... We wanted to write about that feeling of just being addicted to someone, and how someone else’s company can really feel like a drug. Overall, it just felt like the right song to put out in this next era of Momma because it showcases all of our inputs and abilities as a group.”

A roll call of ‘90s underground acts permeate Momma’s field of stylistic impetus. “Kim Deal is a huge inspiration not only because her music rips, but because she was able to survive the Pixies and create her own project completely outside the band. We also really love Liz Phair, Nirvana and Pavement to name a few more!”

The invariable effects of the pandemic didn’t feature as a motivation for their second record Two of Me, born instead out of a bond maintained despite the challenges of geographical distance. “We prefer to not relate the album to Covid since it wasn’t really a product of Covid. The album was really about connecting Etta and Allegra’s friendship while living in different parts of the country. Etta was at school in New York, and Allegra was in school in New Orleans. The majority of that album was written via voice memos sent between Etta and Allegra, or in the short amount of time we would both be home in LA during breaks from school. That’s how we came up with the idea for a concept album.”

“The one thing that we both really had in common while living in separate cities was this concept and fantasy world that we made up for Two of Me. Sending each other ideas and storylines for the record, gave us something to think about separately, and elaborate on when together.”

“Putting the record out in the midst of lockdown was definitely disappointing. We never really got to play the songs live or rehearse them together as a band. It did help fuel the writing process for our next record. Since we weren’t touring Two Of Me, we had all this time to focus on writing and demoing a new batch of songs.”

"Medicine" is out now via Lucky Number. Find Momma on Instagram.