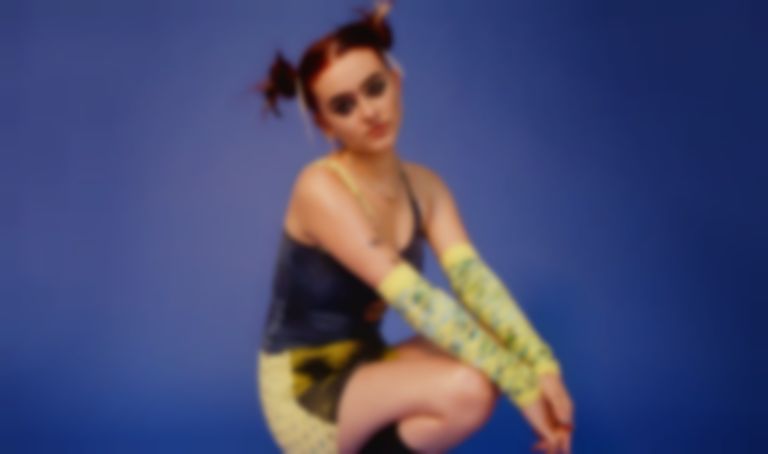 She may only be 18 years old, but as “Word Vomit” shows, Lozeak is unafraid to boast eccentricity.

“I don’t think I’ve ever needed to rebel,” says Lozeak of her instantly recognisable Y2K aesthetic, complete with vibrant cherry red hair, a fluffed out monobrow, and several dozen tattoos. While she’s embraced by the Gen Z community via her 500k+ TikTok followers, she’s striking out as an artist and putting authenticity at the core… “But if being yourself is rebelling, I guess that should count!”

Her rise has been striking. Born and raised in Norwich to a drum and bass loving family, a natural gravitas to music was instilled into Lozeak's - real name Lauren Eakins - DNA from day one. With an affinity for disparate genres, she recalls memories of dancing to Madonna’s ABBA-sampling track, “Hung Up”, before jumping to the likes of Jamiroquai, Luther Vandross, and Amy Winehouse.

As she grew older, she embraced Disney Channel classic Hannah Montana and remembers the large sticker decal she had in her bedroom. “My sister got musical notes,” she laughs, “and I got Hannah Montana.” It's ironic, though, in a way, Miley Cyrus’ fictional trajectory is an alike reflection of Lozeak’s rise to prominence as she transitions from a private life to fully-fledged pop stardom.

Lozeak discovered TikTok in her first year of music college, where she studied for a production course alongside working in a diner. “It was just becoming a well-known platform and it happened to get a lot of attention,” she recalls of the app’s fleeting embryonic stage. Before long, Lozeak snared a fanbase via a makeup video of hers hit the algorithm hard. “I was at work, and it started blowing up.”

A future rockstar in waiting, the cocktail for success began to assemble. Lozeak later debuted her unique voice with a cover of Hozier’s “Take Me To Church”: poignant and timeless in tone. “This was when my manager (who also works as an A&R at Parlophone) reached out, as well as a few labels. At first, I thought it was all a scam… After nearly a year and a bit, as I just turned 18, it came around to me choosing a label to sign to.”

my voice doesn’t match my face

Now well lived in and equipped with experience, Lozeak steps out with “Word Vomit”, released via APEX ERA – a co-run imprint of Parlophone which felt like a natural home. More than anything, she’s founded herself on an admiration for those that helped her on the right path – both on and offline. “I started using TikTok to express myself and luckily I found an amazing group of people that support me and my music… I’ve always believed it’s what I was going to do,” she shares with minimal trepidation.

Self-awareness is one of her greatest assets. “I think the biggest misconception is that our generation is too sensitive. While social media can sometimes be super toxic and harmful, I think most of the time it has had a massive positive impact on the way the new generation thinks – most young people are completely awake on social matters and global issues.”

“I think [TikTok] makes it more fun for me when I’m writing songs,” she draws back. “I have such a specific group of people that follow me, sometimes I base my concepts around them.”

Lozeak's signature is her character, and that’s what she delivers on “Word Vomit”. Unwaveringly chaotic and teeming with attitude, the track is everything that makes an electrifying pop-rock package. A scuffed up, playful, middle-finger number, Lozeak races through the notion of oversharing and broadcasting intended privacies.

“It’s about friends in your life who can’t shut up!” she comments in a tongue-in-cheek manner while explaining how the track arrived from a weeklong session with The Nocturns (Bastille, Tom Walker). "Joe suggested the title idea “word vomit” in a session and even though we didn’t use it that day, it stuck in my mind. The next day, I had a situation with a few of my friends that started because of everyone not being able to keep each other’s secrets/business to themselves. I was inspired by this concept and thought it matched well with the title, so I told The Nocturns the goss which helped us write the song! (Me clearly not being able to keep my mouth shut either).”

“In the session, I referenced “Yeah Yeah” by Bodyrox so that we could recreate the vocal style she uses in the track and some of the instrumental elements. My dad used to play this song to me when I was young, and I recently re-discovered it… I wanted to recreate her harsh (and very British) vocal, but without it having to be similar to the song production-wise.”

The combination of charisma and experimentation aligns seamlessly in the track with a grunge styling that reflects the guitar music of her teenagerhood (Avril Lavigne and Radiohead), as well as her dream collaborators (Travis Barker and WILLOW). “It’s written from a playful, sarcastic perspective, as if I took on that personality myself,” she concludes.

It’s still early days for lozeak, but her aspirations are commendable. “I aspire to be an artist who grows to be successful through being authentic and original, [whilst] hopefully challenging some social standards.” Make no mistake, Lozeak is here to create her own lane.

“Word Vomit” is out now via APEX/Parlophone. Find Lozeak on Instagram.