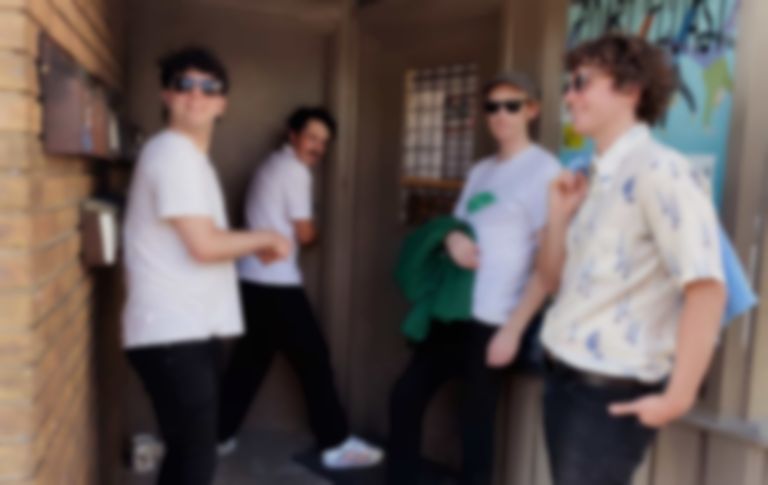 Just in advance of the first US presidential debate, Toronto four-piece Kiwi Jr. are taking a satirical swipe at the political arena on “Undecided Voters”.

Kiwi Jr. are back with a new label but the same sardonic wit. Their debut on Sub Pop, “Undecided Voters” sees lead singer-songwriter Jeremy Gaudet turn his darkly comedic eye to the bizarre world of modern politics. In particular, Gaudet seems both angered and amused by the increasing entertainment factor on the debate stage.

As we prepare for perhaps the most theatrical and gladiatorial political debate in history, “Undecided Voters” is simultaneously extremely funny and painfully prescient. Its message is summed up beautifully by the gloriously farcical music video, in which two horse jockeys compete at a candidate’s debate while the media scramble to make sense of it all.

Gaudet’s impressionistic lyrics are a perfect match to the visual madness. The allegation that “King Crab doesn’t care about time zones” and “I take photos of your photos and they really move people I know online” are acerbically absurd highlights.

Such is the humour of the lyrics, it’s possible to miss the musical craft at work. Like on debut album Football Money, the riff here is deliciously addictive. Combined with a simple but effective chorus and Gaudet’s Casablancas-style slur; the early Strokes comparison comes naturally, as well as Sub Pop label mates Rolling Blackouts Coastal Fever and Corridor. Whilst the infectious jangle may be similar, Gaudet’s witty lyricism is fiercely fresh. With tongue firmly in cheek, Kiwi Jr. said of the new single: “We all know UNDECIDED VOTERS: democracy's driftwood, the third planks in the flotsam that purple the pie chart, always on sight and never a part of the scene”.

"Undecided Voters" is out now via Sub Pop. Find Kiwi Jr. on Instagram.