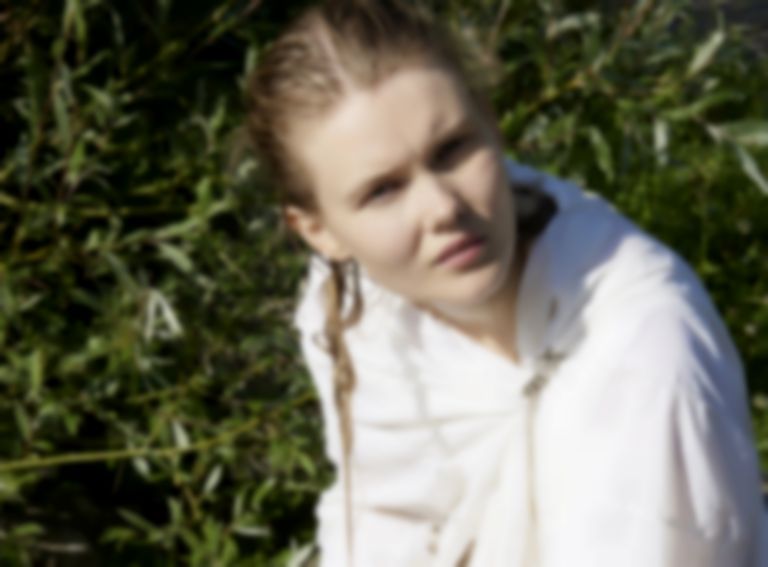 “Tripped a glass of water but you didn’t see / Opened up a bottle of something strange / You started dancing, I sat and drank / Can’t get it out of my head”

The words “hero slave” fade in as easily as they fade out.

At a time when many of her Icelandic peers strive to fill space from the get-go with attitude but end up sounding bombastic, Sunna delivers a euphoric tune that begs to be played on repeat, hinting at greater things to come.

The Reykjavík native learned to fly playing with lauded electro-pop outfit Bloodgroup from 2010-2015, alongside Janus Rasmusen of Kiasmos fame, and Hallur Jónsson and Lilja K. Jónsdóttir who now perform as Lily the Kid.

Sunna may have left the musical Reykjavík behind to pursue a degree in fine art in Lausanne, Switzerland, but she says she’s been unable to stop herself from being musically creative. “I didn’t really think about starting a solo career, I just started writing and before I knew it I had a collection of songs ready.”

Sunna performed solo for the first time at the LungA art festival this summer in Seyðisfjörður, Iceland, where she played eight fully composed songs; she says she has many more that are in various stages of development.

After giving “Hero Slave” a few too many listens, we caught up with Sunna and asked her questions about her new solo career.

BEST FIT: What can you tell me about “Hero Slave” and the creative process behind it?
Sunna: “Hero Slave” is one of the first songs I wrote. I was in an art history class and everything was in French, meaning I didn't understand a word of it. Instead of sitting there idly, I started making music on my computer. That's actually the start of it all. Most of my tracks were made in those art history classes. Then the lyrics came later.

What can you tell me about them?
The lyrics are a weird mix of dreams, reality and my childhood memories. I was at a party where the main topic was a bottle containing a mysterious liquid. In the end, we opened the bottle. That night, a dog saved my life from whatever was in that bottle and that's where the title comes from.

How conscious of a decision was it to make such a minimalistic track? Is minimalism important to you in your everyday life?
It wasn't really conscious in that sense, but I've come to realize that I'm quite a minimalistic artist, so I guess it comes naturally to me. Most of my school work is also really minimal and conceptual, but my life is definitely not, so maybe it makes a good contrast.

What are your plans for recording the rest of your tracks and releasing them?
Next up for me is making a music video for “Hero Slave”. Then I plan to release more singles in the coming months. And who knows, maybe a full album in the not so far away future. But for now, school is starting again soon so I have to try fitting some concerts in that schedule. Hopefully I will have something lined up soon after this release. :)

"Hero Slave" is released on 25 August.