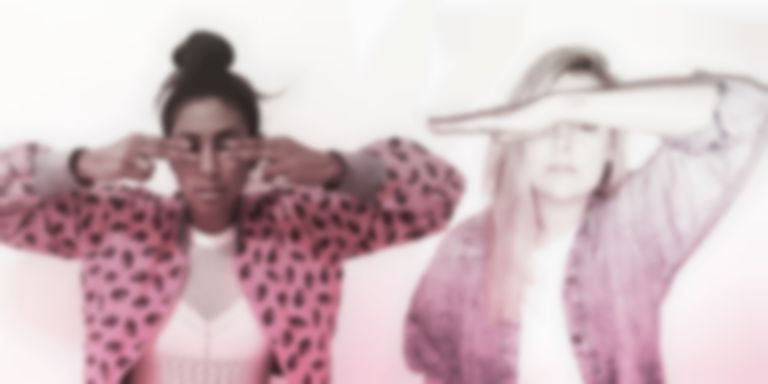 Ahead of the release of their three-track debut EP Liquid Love, EXON BANKS are today sharing standout track "Therapy", an awe-inspiring introspective look into their musical world. It was written as a form of therapy for the pair who, as they describe below, had "a messy year last year". Its subdued synth lines and heady chorus offer some insight into those hard times.

We spoke to the pair about their mission in the music world, and what it's like making music in one of pop's strongholds, as well as their highly anticipated upcoming release.

Why did you choose to launch your career with a cover of 50 Cent's "Candy Shop"?

That's a good question! It just happened. Exon often sings on this song when she’s in a drunken good mood, and one day when Banks made this slow beat Exon enteedr the room singing "Candy Shop" and it just fused together.. We felt that it was interesting how the lyrics are perceived different when a woman sings it, and that it was fun to expand those perspectives; what's okay to say as a woman or as a man. With the music video we wanted to show something real instead of that stereotypical way of portraying gender roles as we see in so many music videos.

Where did the name Exon Banks come from?

It's so simple - short versions of our last names, Ericsson and Bankefors.

Today you're sharing "Therapy", from where did the inspiration for this track come?

We both had a messy year last year, and somewhere on the road you just tell yourself that it's time to make a change. Sometimes things doesn’t work out the way you want, and sometimes you don’t even know what you want. You know that feeling, when everything suddenly becomes clear and you know exactly what to do? Making music was like therapy for us, a good way of processing and letting bad feelings go.

"Therapy" is part of your debut EP. How have you found the process of bringing this collection of tracks together?

We both were super hungry for being creative agan after having a break from making music together. Exon been out of the country working, and Banks had been making music in other projects for a while. When we finally started again it was easy, we made so many tracks in a short period. We just listened to them one day and decided that the three songs we would choose to release on this EP said something generally human about the ups and downs in life that we liked.

What's your favourite track on the EP?

You played at Where's The Music in Norkköping this year, what's the music scene like at home in Sweden?

It feels like [it's very similar to] the music scene here at the moment! There are so many new interesting projects and artists when it comes to electronic pop, dance music and hip hop, and a lot of small DIY labels. It also feels like there is a change going on with more women behind and on the stages - that's inspiring!

What are your plans for the summer?

Exon just bought a house in our hometown with a big basement that we have started to rebuild into a studio and rehearsal room. We have loads of work to do there, but as soon we are finished we wanna get nerdy making more music and working on an album this summer. Of course, we also plan to barbeque in the backyard and go swimming in our favorite lake Ågelsjön and just hang out with people we like.

Liquid Love is out 2 June.