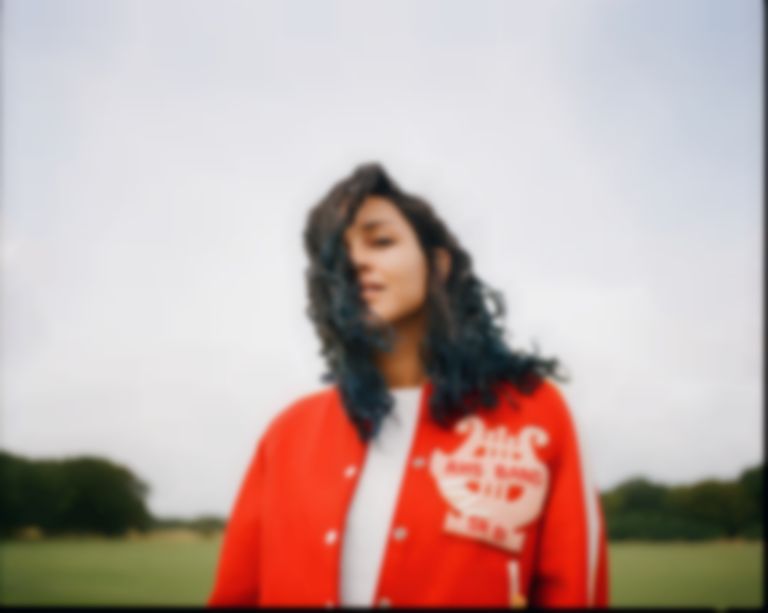 In modern industry terms, four years between your first EP and your debut album does seem like a long time. But then again, some artists need time to grow. Today, Eliza Shaddad announces her first full-length record and judging by the lead single it's been absolutely worth the wait.

"White Lines" is taken from Future, the follow up to the Waters and Run EPs, and it's the sound of Shaddad entirely confident and focused on what direction she's taking.

The track expands its vast horizons over five minutes, starting as a chiming dream-pop track but developing into a driving indie-rock anthem. There's even evidence of the much-derided guitar solo, on a searing sort of two-note instrumental bridge augmented with swirling organ. It strikes of assuredness, and this feeling is replicated in lyrics where Shaddad sings of a singular vision, empowered by the knowledge that being alone doesn't necessarily mean being lonely:

It might be the Scots-Sudanese singer's best song to date, and it bodes more than well for the forthcoming record. We spoke to Shaddad to find out a little more about the song and the album.

BEST FIT: Hey Eliza, it's been a while since we heard from you. You're finally releasing your debut full length....was it an easy road to here?

Eliza Shaddad: "Hey. It has indeed. And I am indeed. Thank f*ck. It’s taken forever. Such a torturously long time I honestly can’t believe we all stuck through it. But here we are. Wiser for it no doubt, and full of a healthy amount of relief that it’s finished, ha and that I still like it,"

What can you tell us about the new single, "White Lines”?

"It’s the very first track on the album, and lyrically it sets the scene for everything that's to come. I’ve always found driving meditative and I find a lot of honesty tends to come out in the car.. e.g. often when me and my mum have a big chat it takes place on long journeys. So a couple of years ago I went on a trip to Sydney and borrowed my friend’s station wagon and drove up the East coast for a week. I was alone almost the whole time, I slept in the car and woke up at dawn and swam and started learning to surf, and it was like a week of mobile meditation or something. I suddenly had all this space which I guess I’d been craving deep down for a long time, and the further I drove the more I steadily realised how clearly I wanted and needed some solitude. Figuring that out was full of sadness and joy and absolute certainty, and this track tells that story."

It feels like the most direct, expansive track from you so far...there's even a sort of two-note guitar solo in there. Was there any thought to do something like this, or is it a product of a lot of live shows?

"Haha I’m not sure which the two note solo bit is but hold on to your pants because there’s a few proper solos coming up on this album. I’ve always started the recording process by producing demos at home, but I’ve learned a lot from the likes of Chris Bond over the years so nowadays when we go into the studio we’re starting from a place that’s much fuller than with the last EPs, and so it’s more natural to go wider and bigger more quickly. With this track I just wanted it to grow and grow steadily until it was this huge celebration of certainty."

"It’s about looking forward, moving on, or at least trying to."

How do you feel the album compares to Run and Waters?

"Well I think Run was a step forward and in a different direction from Waters, and Future is a similar step from Run. I think lyrically I’m still writing long, deeply personal stories and that doesn’t look set to change anytime soon, but musically I’m ever learning and evolving. Playing live and recording and listening all definitely feeds into that, but ultimately most of the differences in sound emerge largely based on what’s going on in my life. During Waters I felt one way, during Run another, and during Future different again."

It's four years on since the first EP, which feels like a long time...can you still identify with the Eliza Shaddad who made those songs? Has being in the industry wheel for that time taken a toll at all?

"It is a while. Two years between releases… Four years of working towards this. I can still put myself right back there actually, as soon as I start singing the songs. Which is mostly a good thing. And I don’t feel that chained to the wheel luckily. I work with really magnificent, hard-working, artist-friendly people at Beatnik Creative, and my manager Ali is literally always fighting my corner. So yep, we’ve had our set-backs along the way, and finishing this album the way I wanted to has taken pretty much every last bit of steel I have. But we’ve also had loads of support from amazing people on all sides…Family, friends, colleagues, and organisations such as PRS and HMUK, so we’ve just kept on learning, and adapting, and trying to appreciate the good stuff."

Is 2018 going to be a busy year for you? Do you feel it could be a defining moment?