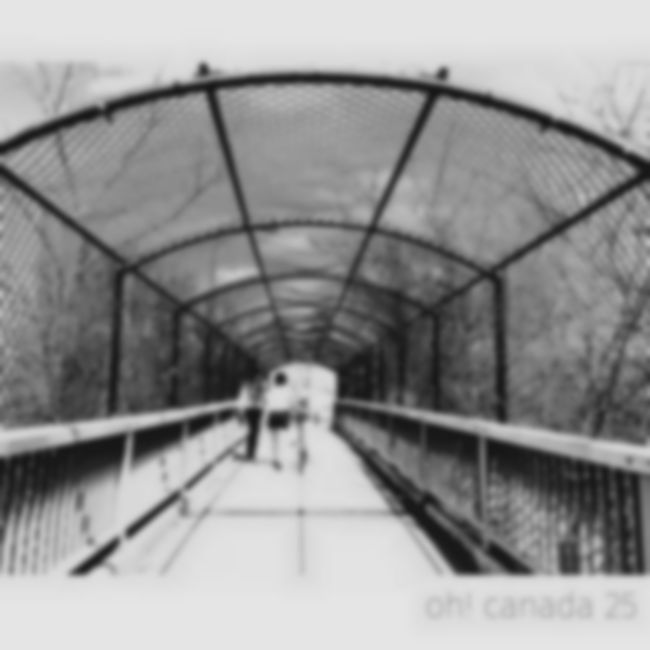 Our Oh! Canada series returns today for our 25th Edition (and 35th compilation including special editions). Since 2009 we have been bringing you compilations of the best in new Canadian music from coast to coast and everywhere in between, from A Tribe Called Red to Zumpano. Our only criteria has been that we love the music and think it deserves to be shared. Today’s compilation will feature the 494th artist to be featured, and the 688th track.

Fittingly enough this edition of Oh! Canada kicks off with two artists who have regularly appeared on the compilations in the past, with both Vancouver's Cyrillic Typewriter and Ottawa's The Acorn contributing selections from their latest records. There’s icy electronics from Milk & Bone and Etiquette, the new project from Holy Fuck’s Graham Walsh and Julie Fader. If those two artists lend the compilation a wintry feel, Astral Swans and Adrian Teacher and The Subs look forward to warmer times, offering up two likely frontrunners for ‘Soundtrack of the Summer’.

Bry Webb’s Free Will was one of our favourite albums of last year, and we are delighted to be able to bring you the skittering drumbeats and swooning pedal steel of album highlight 'AM Blues'. Fans of twang will enjoy the new offering from Sun Belt, a new project featuring members of Neko Case’s band, Fond of Tigers and Flophouse Jr amongst others. Meanwhile Dumb Angel are the latest in a line of artists to come out of Saskatchewan to suggest that many in the prairie province soundtrack the long winters with music from the UK in the early 90s. Fans of Mojave 3 and Spiritualized at their most joyous may want to take note. This month sees the release of Kathryn Calder’s self-titled third album, and ‘Take A Little Time’ is a pulsing, spacey highlight of the record. Winnipeg’s Les Jupes promise that ‘Everything Will Change’ on their album Some Kind Of Family, and change it certainly has, with the band sadly breaking up just as the album was released.

Things get louder as we swing out west for tracks from Vancouver’s Woolworm and Weed, while Metz keep up the pummelling sonic intensity of their debut record on the recently released II. Things are kept dirty and sludgy by Vancouver free-punk duo Peregrine Falls. Normally found playing in Dan Mangan and Blacksmith, this project allows the pair to really cut loose and, in the words of drummer Loewen, deal with ‘the natural cacophonous din in my head.’

Victoria’s Freak Heat Waves album Bonnie’s State Of Mind fuses the post-punk sound of their first record with more electronic influences and was produced by Monty of Viet Cong, who the band have just been touring with in the US. Fellow Victorian’s Fountain also have a fine line in snappy, angular riffs. Fake Palms, new signings to Toronto’s Buzz Records, take chiming guitars and soften them with sweet melodies before slowly and lovingly obscuring both in a thick layer of distortion and fuzz. The band will be kicking off May with a well deserved opening slot with Protomartyr and Metz in Toronto this Friday.

Three years in the making, the Suuns and Jerusalem In My Heart album is a collaborative record featuring two of Montreal’s finest acts. The result is a swirling, intense record that manages to feel spacious and claustrophobic in equal amounts, each act bringing their own unique approach to things and then allowing the sounds to wind around each other, sometimes working together and sometimes in opposition. 'Metal' is perhaps the heaviest moment of a hypnotic, captivating record.

Overnight is the latest project of Carla and Lynette Gillis, sisters who previously recorded as Bontempi and Sister, and founder members of Plumtree. While the pretty harmonies are still firmly in place, Overnight are a far heavier beast than their previous incarnations, Carla letting rip with chugging riffs and spiralling solos while the drums crash around her, like a blissed out, mellow Sabbath. The band’s album comes with a suitably metal-styled special edition cover courtesy of Scott Pilgrim creator Bryan Lee O’Malley.

Having been responsible for some of the most blood-curdling screams we have ever witnessed as part of HSY, Anna Mayberry showcases the sweeter side of her vocal range as part of ANAMAI, alongside David Pstuka of Egyptrixx. ‘Lucia’ showcases the interplay between the dark, forbidding heaviness and drones and Mayberry’s delicate but strong vocals. The low resonances continue with a track taken from Aidan Baker’s The Confessional Tapes, which finds Baker experimenting with glitchy electronics and slowcore song structures. Released in February, the ever prolific Baker has recently released another new album of drones, soundscapes and field recordings.

This month's compilation closes with ‘The Sun Roars Into View’, the opening track from Colin Stetson and Sarah Neufeld’s collaborative album Never Were The Way She Was. Stetson and Neufeld’s instruments dance around each other, swooning, roaring and cooing, calling and responding. The result is a dizzying piece of work that is at once primal and intimate.

As ever, a huge thanks is due to all those involved in making the compilations happen. Please feel free to download and share, and if you enjoy what you hear you can find out more about each artist by clicking on the artist name in the track listing below. While not all tracks are available in the stream above, they are all included on the download.

6. Astral Swans - Let Their Faces All Blur Out

7. Adrian Teacher and the Subs - When Did I Get older

11. Les Jupes - Everything Will Change

19. Suuns and Jerusalem In My Heart - Metal

20. Overnight - Showed Up On The Beach

23. Colin Stetson and Sarah Neufeld - The Sun Roars Into View