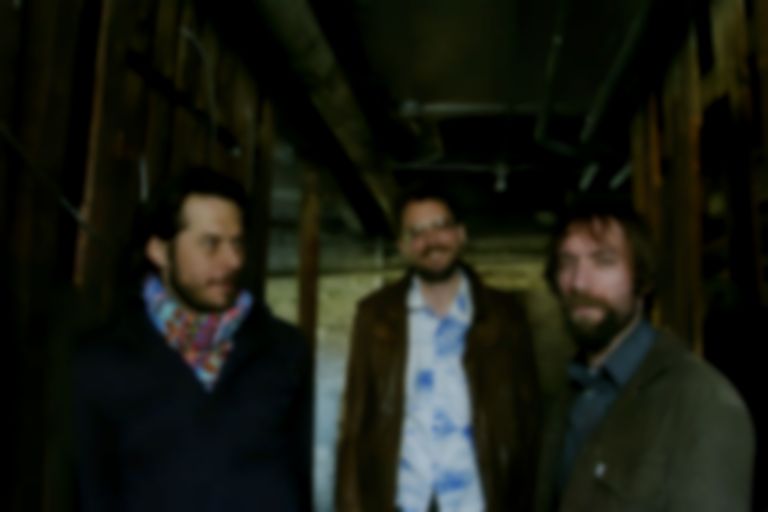 This Friday sees the release of NO SCARE, the new album - and first for Wichita - from scorching Chicago rock trio Health&Beauty.

Led by Brian Sulpizio and backed by keyboard player Ben Boye and jazz drummer Frank Rosaly, the band have links with the likes of Bonnie Prince Billy, Angel Olsen and Ryley Walker. While time spent playing pickup with those artists might suggest a sort of languid approach to music, Health&Beauty are a power trio in all the senses of the phrase.

Explosive, tight and jamming like White Denim but experimenting with time signatures more likely to be found in jazz and prog (or, hey, even Crazy Horse), the 70s influences are loud and proud on NO SCARE - and they make the record one of the most exciting of this year.

Below, you can stream the album alongside being taken through it track by track by band leader Sulpizio.

Back To The Place

There's a Department of Human Services office about a half-hour drive out of town, or about 45 churches with canned refried beans and Rice-A-Roni. The fewer people live in an area, the more effective the local strongman is going to be, the more pervasive his one mind will be in determining the lives of those around him. You won't notice this easily because everyone openly agrees with the way things are or they are bullied out of town. In a city you can think however you want until you become a movement; in a small place your thoughts are big enough to be threatening by themselves. Whoa! I didn't know I thought this way; I'll need to think about it some more and see if it holds up. I remember my boss at the wood shop said, "You're pretty good for around here, but no one's going to give a shit about your music in a big city like Chicago." He was mostly right!

A young man who lived in my neighborhood in Chicago was about to graduate high school and he was telling me about how the best option for him was to sign up for the Army. He was also considering becoming a truck driver but I never saw him after the one time so I don't know what he decided. I wrote the song with the volunteer army in mind. I really liked having the Neil Young line at the end- "Can you see my love, shining for you?" Tied it together in a way. We're still doing that live, which I think is legal.

These are two names for women that are Puerto Rican in origin. Asunción means "ascension" and Dayanara means "husband killer." Listening to this song mostly makes me think of neighborhood driving and John Lennon. Musically it is possibly the most tightly-composed song on the record. I don't like my voice on this one because it reminds me of that whispery thing that Sufjan Stevens does and I'm trying to get away from it. Nothing against him it's just not what I want to sound like but it's too late for this one, bub.

Imagining those sort of black-hearted Disney characters like Jafar or Scar. These attitudes are not things that we should be shocked to find inside a person and then shun them, but things that we should recognize are present to some degree in all of us. And they can get out of balance. And we can forgive people and gently encourage them to release their grip on darkness. I like to read books about dogs and I read this great paragraph at breakfast today which I feel compelled to quote in full: "We want to believe in the Lassie myth, to focus only on the dog's gentle, forgiving, loving nature. Of all the rocks on which we may stub our emotional toes, this is a big one. We do not want to think that the dog lying at our feet is a predator and a powerful one at that. It may be that we'd prefer that the people and animals we love most dearly have no dark, ugly side; we idealize them with this simple 'Oh, he'd never do that!' or 'She's just not that kind of person.' In any relationship, such sanitized, idealized views of another being does [sic] not lead to deeper understanding or a more intense connection but to the inevitable disappointment that occurs when we are unable to embrace both the potential for both [sic] light and the dark contained in all of us. This is not to say that all dogs will sooner or later act in aggressive ways, no more than all humans will eventually harm another person. The dark potential that lurks within each of us needs to be recognized, and our relationships shaped to encourage the joyful lightness of being, not trigger the ugly possibilities." -Suzanne Clothier, Bones Would Rain from the Sky

This is the best song on the record. Some people have called it "shambolic" in a shit-eating, disparaging tone of voice, but their bile is misguided and uncalled-for. I wish I could write a thousand songs like this. I am still sad that it is called "Beyond Beyoncé" because I really like her music and I feel like this title is saying "this song, by us, that you are listening to is a kind of music that is more advanced than the music of Beyoncé." That is not something that I believe or would say. I wanted to call the song "Third Leg in the Afternoon," but was talked into keeping this, which is a pun on the bit at the end that I came up with in the shower saying some nonsense like "I'll love you babe from beyond the beyond, say, ready now." I left that part out of the lyrics on the sleeve. The bass clarinet bit, arranged by Frank and played by Jeff Kimmel... omg.

This song is pretty old and has been reworked a couple times, it's like our Leaves of Grass. The definitive version is probably the one on our tape GUNS put out by teenriver.bandcamp.com. I think depression has a lot to do with seeing a difference between our imagination of how the world could work and what actually happens. Aaron Swartz was in a position to work to make things a little better, and it was shocking how hard people worked against him to keep the status quo.

The melody came from trying to rip off a bass line from "Trance of Seven Colors." We wrote the song together in rehearsal. Riverside Cemetery is the name of the largest cemetery in my hometown, Defiance, Ohio. My dad's parents are buried there. A couple years ago I moved back there for a summer. I applied for food stamps and, if you are able-bodied, they send you to cut the grass at the cemetery. They divide your benefit amount by minimum wage and you go and work for that number of hours. For me it ended up being two and a half days per month. Many people thought this was not enough time. I thought, as long as I was working for it, they should pay me in Money instead of food stamps.

It was not only food stamp recipients working at the cemetery but also prisoners on work release and people serving community service. The man who I thought was the boss was actually a sort of superintendent; he was and older man who drove the truck around, but he was only there working off a drunk driving fine. The actual boss was a guy in his late 20s who we barely saw, but he would come out of his office in the morning to harass the prisoners. I think he thought he was doing an especially good job by contributing to their punishment. The work was pretty fun and those of us in the field had good talking time at lunch breaks. Once I bought donuts after we'd spent the morning digging a trench for a new water main. Another time I came upon a prisoner who was weeping at the grave of a child, reminded of the time he was missing with his own child.

One day a prisoner axed to use my phone. I gave it to him without thinking about it and then realized that you're not supposed to do that. Apparently the prisoners were instructed about how to interact with those of us who were "free," but we were not briefed about anything. It felt pretty natural to hand my phone to a guy I'd been working with all day. Anyway some employees driving a truck around saw the guy using the phone, came back & told the boss. The dude came running out of his office screaming his head off at the guy who had used my phone and they fought a little bit, the cops were called, he was hauled away, it was a big deal.

No Scare by Health&Beauty is out Friday 5 August via Wichita.