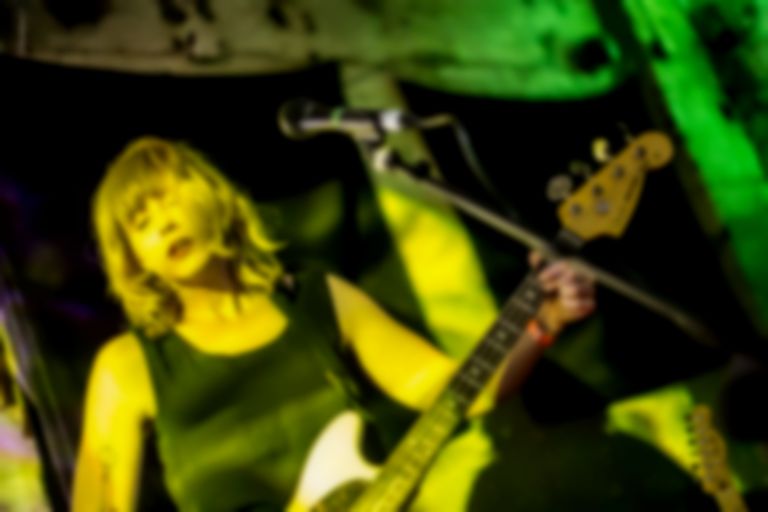 Poor Bachelorette. The eccentric New Zealand solo artist makes a rare appearance on British soil, commences her show with a strong run of off-kilter synth-pop that recalls the lo-fi ethic of Casiotone for the Painfully Alone, hypnotises the audience with visuals akin to a Ceefax page having a seizure…then her Ableton software fails on her. To be honest, it’s a minor miracle that in an era where so much is dependent on laptops, iPods and other digital gewgaws that Blue Screens of Death don’t scupper (or at least moderately inconvenience) live performances more often. To her credit, she deals with it well. But one excellent chiptune-esque number apart, she never quite regains the momentum of the earlier half of her set, which is a shame as at her best, she’s more intriguing than a small-venue support act has any right to be.

Thankfully, the Gods of Live Music looked down more kindly on headliners Wye Oak. The last time I reviewed the Baltimore duo for The Line of Best Fit, back in 2011, I commented that their moniker may engender misleading presumptions about the music they play (I personally anticipated a bunch of real-ale drinkers prancing about with lutes). They are in fact a much more interesting - and considerably less irritating - proposition, especially given their recent shift towards more synth-driven songwriting on latest album Shriek.

For one thing, for a band consisting of only two members, they sure make one hell of a racket. Andy Stack is a rhythmic powerhouse on drums and keyboards, fluidly shifting between the two mid-song, mid-verse, mid-bar, whilst Jenn Wasner’s husky vocals, rumbling bass riffs and new-found 80’s synth lines (at one point I was convinced they were going to break into Toto’s “Africa”) lend their indie rock balladry both power and subtlety. There’s no visuals, no gimmicks, no pretention here- just good, old fashioned solid songwriting, light on cliches and heavy on atmosphere. Some might bemoan the more electronic direction the band have gone in recent years - indeed, they even employ a backing track from time to time, albeit in subtle fashion- but their more earthy, folk-influenced work hasn’t been completely jettisoned. Indeed, the best-received songs of the night were those that comprised the encore - a moody and effective cover of Kate Bush classic “Running Up That Hill”, the Big Hit “Civilian” and a solo acoustic rendition of “Doubt” - none of which featured any electronics at all. Perhaps, especially given the technical hitches earlier in the evening, there’s sometimes truth in the old dictum “less is more”?