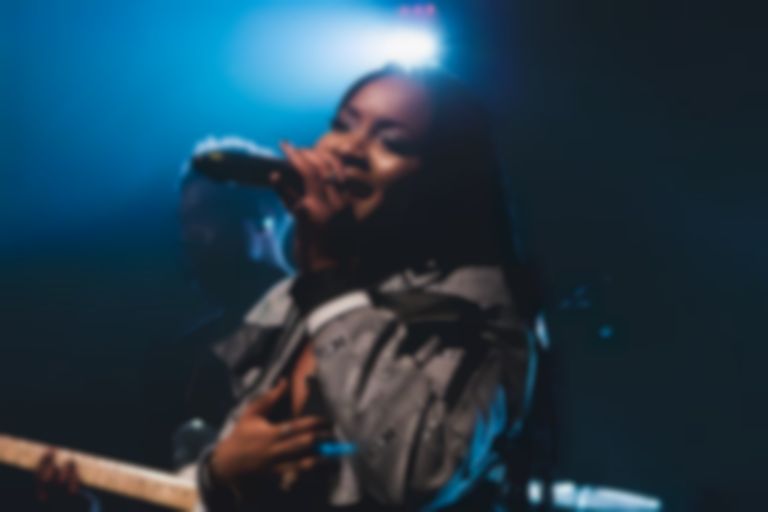 Almost exactly a year ago to the day, Ray BLK was heralded as the BBC’s Sound Of 2017 and was thrust into the industry spotlight, throwing a weight of expectation in her direction. Hot on the heels of the mighty wave of publicity, most artists may have rushed headlong into releasing their debut album, but Ray BLK stood back and decided to do things her own way. A year later, and there is still no debut album to be seen, and the question on everyone’s lips at tonight’s sold-out show is - was she right to wait?

As Ray BLK enters the stage to join her band, her sparkling, diamante boots and dress are representative of her glistening intention. She commands the stage and the weight of her stage presence fills the room in a completely effortless fashion. There is something nostalgic in her style, harking back to the R’n’B stars of the late 90s/early ‘00s, whilst lines such as "hoping you see the DM I sent you on Twitter" ensure that we’re firmly cemented in 2017. This amalgamation is strikingly charming.

At times, it really is hard to believe that this is an artist yet to release her debut album, as every word of songs such as "Chill Out" and "Baby Girlz" is belted back at the stage by loyal fans who Snapchat every twerk and hair-swish. It is worth mentioning that Ray BLK’s band also are exceptionally tight and create a powerful base for BLK’s vocals that makes the songs sound much bigger than they do on record, which is no mean feat. They lose their glossiness, but instead feel more soulful and have more of a believable realness about them.

Tonight’s show is also a statement that Ray BLK is not afraid of taking risks. Not only does she seamlessly drop in new material alongside well-loved tracks such as "Durt" and "Talk To Me", she also slips in some pretty brave covers. First up, she chooses Destiny’s Child classic "Say My Name", which moves into "5050". By taking on Queen Bey, BLK clearly displays her lofty ambitions. Similarly, her cover of Adele’s ‘Hometown Glory’ seem to spell out the direction Ray BLK wants to take her career in.

It’s almost a shame that BLK brought on Wretch 32 to join her for "Gone" and Stormzy for her final number "My Hood", as she's perfectly capable of delivering this whole set single-handedly. However it does have the effect of sending the whole room into complete hysteria which contrasts beautifully with the slower points here. A particularly impressive moment comes when BLK explains that her upcoming album will be about empowering women, and then proceeds to sing a strip-backed song about women knowing their worth and reaching for the best. Her message is loud and clear - don’t settle for less than the best, whether in your personal or professional life.

As we all collectively rush towards compiling comprehensive "end of year" lists and the industry head honchos decide who they are going to usher into the spotlight as the "sound of 2018", tonight’s show looks to shed some light on Ray BLK and what 2017 has been about for her. Ray BLK takes tonight’s opportunity to remind everyone that there may be new talent coming through the cracks, but that does not mean that her year is over - it really feels like it’s still only the beginning.