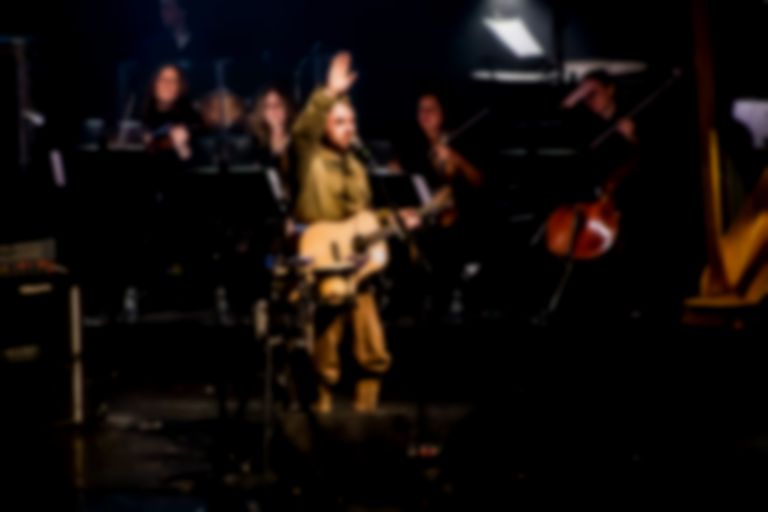 When musicians revisit their back catalogues, it's often self-serving indulgence. Steve Mason, being the maverick he is, of course doesn’t do any such thing this evening. As well as playing songs by his alma mater The Beta Band he reinterprets his own present as a solo artist.

While Tonight (27th January) at The Barbican is a celebration of his songbook, what it’s not is a nostalgia trip. Over two sets, accompanied by the conductor Joe Duddell and twenty musicians, including a string quartet, a brass section and three-piece backing vocal group, Mason deftly revisits and rearranges his back catalogue.

That the Beta Band didn’t sell out stadiums continues to be a mystery, perhaps they were just too ahead of their time. Their cult appeal was captured in a scene in High Fidelity, where John Cusack’s character bets his fellow music geeks behind the counter of a record shop that he can sell five copies of The Three EPs by playing “Dry the Rain”, which prompts the customers to start nodding their heads along to the music. There’s also a lot of head-nodding tonight, myself included, at the groove that Mason brings to the songs, even when it’s embellished with all manner of classical instruments.

Opening with “It’s Not Too Beautiful” from The Beta Band’s eponymously titled debut, for all the instruments at his disposal, it’s the klaxon of a house music sample that initially rings out, oddly at odds with the hall, but that’s part of the charm of the evening. When the strings and brass join the fray, rather than a straight classical take on the song, it remains mind-bogglingly psychedelic.

Before “Lonely” from 2013s Monkey Minds In The Devil’s Time Mason quips that it hadn’t been played live very often because “I couldn’t afford brilliant backing singers, but we have them tonight” and he’s right, the backing vocalists are fantastic, complimenting his singing and adding a beautiful funk of gospel. A measure of how relaxed Mason is this evening is evident before a triumphant, melodica infused “Alive”, his roadie brings out the wrong guitar to which he deadpans, “Dave, appraisal after the show…”

There’s a wealth of Beta Band songs to delight in. Before “Assessment” from Heroes to Zeros Mason explains that playing them live gives him two options, “using a sampler, or use this lot and I thought, fuck it…” Built around a taut guitar line, the ensemble is spectacular; the climax builds to a tumultuous crescendo that covers the hall in a wonderfully dextrous sound.

After the intermission Mason returns with Duddle, the strings, brass and vocalists and opens with two songs from his first solo record, Boys Outside, “I Let Her In” and “The Letter”. If the opening set was a technicolour panorama the first part of the second is hushed and imitate, despite the fact the number of players onstage is in double figures.

“She’s The One” sees his band returning to the stage. The speeded up harmonies of the recorded version are bettered by the backing vocalists, who lend it a tremendous funk. When it ends Mason talks about how proud he was of The Beta Band, despite “how mental it all was." Squares”, the only song tonight from Hot Shots II brings a spirit of disco to The Barbican and the transition to a rave reaches fruition with a spectacular “Dry the Rain”. When the drums come in the entire room gets on their feet, leaving the security with no choice but to leave the audience to it, it’s a beautifully celebratory moment.

Mason closes with “I Walk the Earth”, the only track tonight from his King Biscuit Time. And he has walked, at times to dark places. Looking into the crowd at the close, he simply says “Fight the fucking power”.

Steve Mason has always done things his own way. Tonight he continued walking his own brilliantly individual path and he’s never sounded better.

I Let Her In
The Letter
Dr. Baker
Come To Me
All Come Down
Boys Outside
She’s The One
Squares
Planet Sizes
Dry the Rain
I Walk the Earth