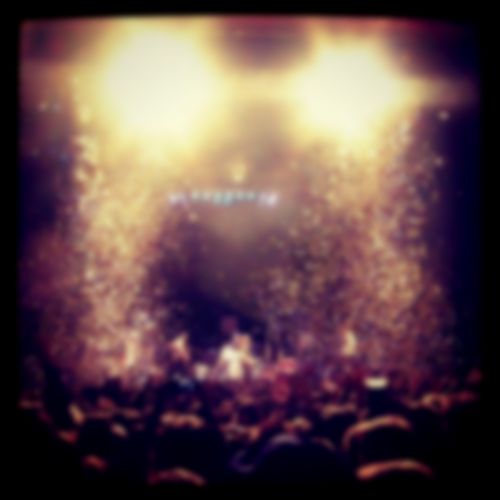 ATP is renowned for its eclectic line-ups, its vibrant experimentalism and its blistering sonic atmosphere. Whereever it is situated, whether it be Minehead, NYC, London or anywhere else, it always manages to produce a party filled with notorious and often nefarious artists being let free in an environment of explosive creativity. Over the years this respected institute has played host to many great artists and many great experimentalists, and the inaugural New Years’ Eve bash was no exception. Bringing to Hammersmith Apollo the likes of Sonic Youth, Shellac, The Pop Group and Factory Floor, as well as Mogwai’s own Stuart Braithwaite DJing into the early hours.

Unfortunately due to some rather poor time-keeping I managed to miss the London based trio Factory Floor, which is rather a shame because their explorations into certain forms of dance music is exactly the sort of thrilling noise I enjoy listening to. Although missing out on Factory Floor was the kind of irretractable fudge I find I am capable of doing at times, my wound was quickly bandaged by the sheer, timeless brilliance of The Pop Group.

Embodying the dark and anarchic spirit of 80s post-punk, to which they are progenitors of some standing, The Pop Group sound just as exciting live as their releases suggest. Capturing magnificently that cross-aesthetic between lofty, artistic vision and preening over-exuberance, of which bands like PiL and Gang of Four manage to capture so deftly. However, vocally they align themselves more with their Scottish cousins in bands like Prefab Sprout and Orange Juice, whose melodies appear more romantic and elevated. Throughout the set Mark Stewart, who announced the band’s reformation back in May, made deft use of his not-insubstantial body, throwing himself around the stage with ease, arms stretched outwards to the crowd interspersing his theatrics with whistles and loud hailers. All this of course just added to the psychedelic and slightly neurotic atmosphere conjured up by tracks like ‘The Boys from Brazil’, ‘We Are Time’ and ‘She is Beyond Good and Evil’.

Recent waves resonating through the blogosphere have depicted two old stalwarts swapping fury over an insurmountable mountain of ideology and pragmatism; those two stalwarts being of course Steve Albini and Thurston Moore. Google it for the unfolding back and forth. Both visionaries who each crafted out their own corner of 80′s underground American rock, and whose combined legacy is one of cultural penetration on a very deep level, who probably wouldn’t have appreciated the fallout collected from blogs, fans and gossips who entirely miss the point. Whilst it is always an interesting debate between the ideologue and the pragmatist it is never going to over-shadow their separate reigns, no matter what the intrigue. And so tonight’s show is an incredible and magical event, a sort of coming together of two forces of the left-field, each incredibly inventive and exciting.

Shellac prove to be as loud and as caustic as one can imagine, generating the kind of violent jolts of crashing guitars and pounding drums the audience expects off of them. Moving through the songs they shake the Apollo with a ceaseless noise, most noticeably when the whole band comes in on the one with incredible power. Watching drummer Todd Trainer play is a sublime vision; a man so perfectly in tune with own universe, carving through the air with ease, it becomes impossible not to move with him. He’s seems to exist on his own, moving with a strange wild grace.

‘The End of Radio’ is their song, and they play it with aplomb. An elongated screed on popular culture, made powerful by the repetitive chug of that bass riff, yet this time Trainer draws out the drum part, running around the stage with snare in hand, beating out the rhythm into Albini’s microphone. Whilst on record this track takes a dark turn, in the live arena it takes on a rather celebratory tone, almost to the point of being anthemic, a perfect track for a NYE party.

Appearing just before twelve, Sonic Youth arrive on stage with a feeling of excitement in the air. Thurston Moore takes to the stage a little while after, holding the band back, hands held up, he then disappears again and comes back on before counting down for the New Year. With celebration in the air the band kick in with ‘Brother James’, from Confusion Is Sex, wildly juxtaposing that traditional NYE jubilation with one of their grimier numbers, an ‘Auld Lang Syne’ for a different type of audience.

What follows is a set with heavy focus on their last album The Eternal (as those who may have seem them recently will attest to), with occasional stops off at firm favourites along the way. ‘Hey Joni’ appears mid-way, a wonderful reminder of Sonic Youth’s past glories, and one which manages to sound even better thundering around the cavernous Apollo. Likewise ‘Anti-Orgasm’ (which follows ‘Hey Joni’) finds its soul here. Where Kim Gordon’s atonal shouts sound a little too earnest for English ears on record, here her vocals sit deeper with the guitars, sounding freer and just a touch psychedelic.

A double-whammy follows shortly after with The Eternal‘s ‘Antenna’ and ‘What We Know’ played back to back. And to close before the encore an extended ‘Massage The History’ sees the band at their psychedelic and introspective best. As a live song it sticks out as one of The Eternal‘s high-points, marking a striking change between the rougher and cruder songs shown here tonight and the slower, deeper tracks that delve into dark corners and sonic, psychedelic atmospheres. In that way ‘Massage The History’ is a neat closer to a set that meanders wonderfully through their notable styles.

With the band’s return for an encore, so too the return of that psychedelic swell; this time through an older track, ‘The Sprawl’. Coupled next to ‘Cross The Breeze’ the pair elicit complimentary feelings and offer some nourishment for fans seeking some of the old favourites. This also ties in neatly with the final track of their encore, ‘Kool Thing’. Their biggest hit to date and an audience pleaser, yet still providing that same sense of unknowing, perhaps elevated by its atypical approach to the standard conventions of pop. Sonic Youth have always managed to stay unconventional, and while the set is not a particularly varied one considering the size of their back-catalogue, it remains their own. Bound by their own sticky, psychedelic glue.