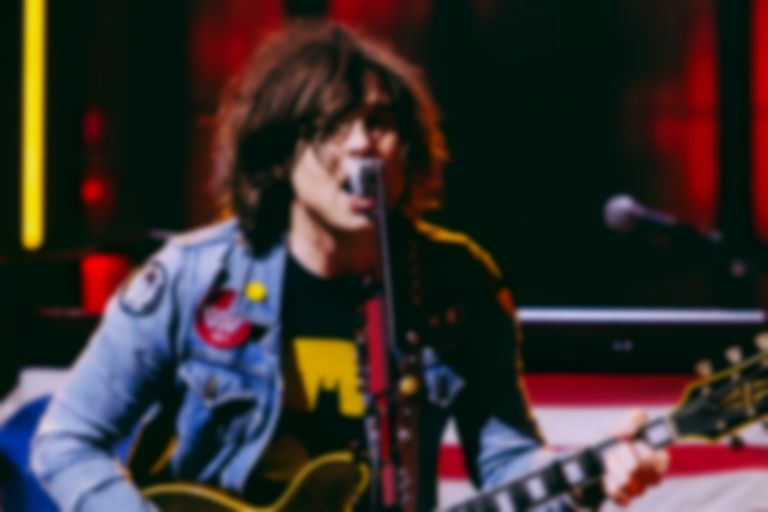 There was a time when a Ryan Adams show was about as relaxing as a penalty shoot-out; renowned for a fiercely combustible temper and openly aggressive exchanges with audience members - particularly with those unaware about his hatred of requests. There was always a slightly nerve-wracking sense that anything could happen. One such outcome would be Adams storming off after a short set made up mostly from threats to turn his misbehaving Stratocaster into firewood, resulting in broken-hearted confusion for many of his cult-like followers.

At his back-to-back sold out, Jonny Depp-featuring, Shepherd's Bush Empire shows last week, those days seemed to be almost completely gone. Engagement with the audience became genuine banter, he looked like he was having fun, and his well-documented tumultuous past appeared to be behind him. Alongside the release of his wonderful new self-titled album on his own label PAX-AM and a number of incredibly open interviews, the California man seems to have discovered a new-found sense of ease.

For the most part ("My Wrecking Ball" provides a stunningly melancholy exception) his 14th studio album embraces Tom Petty-esque inspiration as clinically brilliant Americana rules; it's a sound that Adams has never had a problem adopting (c.f. early tracks on Gold). Some may argue that it was the old angst that made his music so engrossing but with a stable band around him particularly these songs come to life in the live arena with effortless aplomb.

Tonight, Adams somewhat surprisingly features as part of Apple's annual iTunes Festival. The month-long run of shows at Camden’s Roundhouse plays host to some of the biggest names in music: Pharrell Williams, Calvin Harris and David Guetta all featured this year as the tech giant continues to impose itself on the music industry (no U2 comments necessary). The competition-winner setup and unavoidable corporate nature of these shows makes for a slightly strange, lacklustre atmosphere it must be said, and it immediately feels like there is a chance that the aforementioned nerves may set-in for the audience.

Following set-opener “Gimme Something Good” - the massive lead track from Ryan Adams - and “Fix It”, which ebbs and flows between its chunky blues riff and beautifully emotional choruses, Adams reacts to a fans cry: “I’m not in that mood tonight; you’ll have to text me.” The typically sarcastic comment carried fairly serious weight but all became clear and the mood lightened as the night progressed, as he revealed a lost voice (“I feel like the Incredible Hulk” / “I sound like I should be in a detective movie; ‘did you find the gun?’” - was to blame for his lack of between-song chatter. He even celebrated with his band after hitting the impressive falsetto notes at the end of “The Door”.

And despite the joy of beholding an entirely happy Ryan Adams at Shepherd’s Bush, there is a brilliant fascination and enjoyment at the intense level of cynicism that pours out from time to time and this Apple-related show, filled with a large number of competition winners who may or may not feel any affiliation to the singer. He did end up a providing a platform for an insight into a more traditional Adams performance; certainly in terms of on-stage attitude at least.

”You can’t buy this song on iTunes” he openly remarks before explaining a “blackhole” source from which the aforementioned “The Door” comes; regular curse-filled spiels about the live streaming nature of the show punctuate such treats as “Let It Ride” and “Oh My Sweet Carolina”, a track that never fails to bring a chill down the spine; Jessie J was the victim of a random rant and he clearly picked-up on the lack of enthusiasm at new material, which dominates the set: “I’m so glad we spent so much time preparing the new material; you love it so much.”

And the truth is, this sarcasm and playful aggression adds such an exciting element to a musically emphatic show. On top of the aforementioned tracks, new works from Ryan Adams really do feel at home in the live environment: “My Wrecking Ball” is Adams at his acoustic melancholy best, and “I Just Might” and new album stand-out “Kim” provide the brawn, whilst maintaining that songwriting poignance that sets him apart from so many of his peers. These three also prove a point that remains pivotal to Adams’ success; the juxtaposing breadth of his styles: one moment plucking an acoustic and longing for a lost city/love with effortless beauty, the next thrashing through the dark and intense “Rats In The Wall” from his punk-inspired 1984 record, in front of a peace-sign emblazoned American flag and a comedy oversized amp.

Having played for “as long as the battery on a laptop lasts” we are treated to an encore of Cold Roses’ “Easy Plateau” and “Come Pick Me Up” which, complete with harmonica, remains one of the strongest from his ever-expanding catalogue.

There’s never a dull moment when Ryan Adams is involved; whatever mood you find him in at a live show. A line like “I miss Kentucky and I miss my family” is guaranteed to send shivers down the spine. Cynical? Perpetually. Bitter? Regularly. Downright weird? A musical genius? Always.