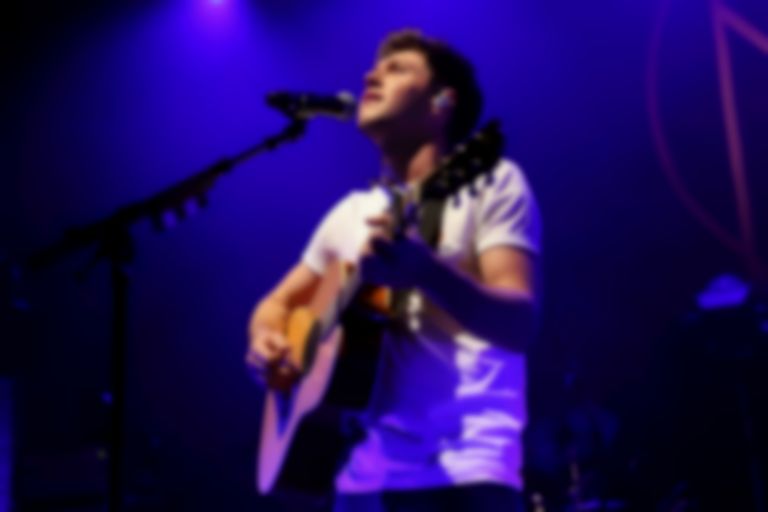 Shepherds Bush Empire is typically a venue for up-and-coming stars; artists who’ve had a couple of hits and are steadily making their way into the big time, but aren't quite there yet. In many ways, Niall Horan fits the bill; he’s had two highly successful singles in the past year, and this is only his second solo live show.

Despite the fact that the 23-year-old Irishman is yet to release his debut album, he can hardly be considered merely up-and-coming – he’s a millionaire with huge numbers of fans all over the world, who has performed to huge crowds hundreds of times, and could have easily filled venues more than three times the size of this cosy, 2000-capacity room in West London. Despite this, the setting is somehow just right for the second night of the Flicker Sessions.

Supporting band Picture This are unfamiliar to much of the crowd, but they are nonetheless received with warmth and respect. The fans listen attentively to their enjoyable – if unexciting – indie pop, and happily clap along when the songs call for it. When frontman Ryan Hennessy explains before playing “Smell Like Him” that it is a sad song, everyone in the room immediately puts their lit-up phones in the air. Although the song is not especially moving in itself, the atmosphere in the moment is. The band are very humble – they too will be headlining this very same room in November – and they frequently thank both the fans and Horan for the opportunity to play.

It is, of course, when the band mention the name of the main act tonight that the volume quadruples. This volume is quadrupled again when the man himself walks casually onto the stage. It's a well-deserved welcome as he and his band launch into “The Tide”, which feels like a fitting opener. As Horan sings “don't let the tide come and wash us away / don't let the tide come and take me”, it feels like he is making a request of the fans. Firstly, to not forget One Direction - the roots of which he is proud of and intends to return to in the future - and secondly, not to let his solo music drown in the endless current of one-hit-wonders. Judging by the music that follows in the next hour, and the delighted reactions of the crowd, Horan's is a career strong enough to stay afloat.

Whilst Horan has made it abundantly clear that he loved his time in One Direction and will be more than ready to return when his other bandmates are ready, the direction of his new music is decidedly different. It's certainly no surprise to fans that these songs are driven primarily by acoustic - and occasionally electric - guitars and have an alternative, almost folky vibe, but it may surprise the general public. Summer smash hit “Slow Hands” is sonically an anomaly, with Horan favouring the more pared down sounds of debut single “This Town”. Whilst the latter is a somewhat soppy acoustic ballad, tracks like “Since We're Alone” and “Mirrors” are more lively, with classic rock guitars and edgy yet clean vocals. This is not to dismiss the singles – both of which are highlights of the night – because everyone enjoys a good sing-along, but undeniably, it is when Niall begins an acoustic rendition of One Direction song “Fool's Gold” that the energy in the room shifts to another plane. People cry, and the whole room sings along as if their lives depend on it. And no doubt, to many of these dedicated fans it feels that way – that it's exactly the reminder they need that this is not the end of their favourite band.

That was the magic of One Direction – and still is; the ability to make fans feel safe, feel held. Of all the boys' music, Horan’s is what will continue this tradition – if the gentle and emotional mid-set track “Fire Away” is anything to go by. Listening to it feels like receiving a warm hug from Horan himself, something elevated by the cosy lighting and intimate setting. Lyrically, it's very touching – a more sophisticated, less pop version of One Direction fan favourite “Little Things”.

It’s a warm and emotionally charged night, but not one that leaves people too sad that it's over. Debuting an album that the world is yet to hear is a risky move – something Horan acknowledges early in the set. As “On My Own” rounds off the night, it feels very fittingly not like an ending, but a beginning. It is a song filled with excitement about life and the sentiment echoes the uncontainable grin on Niall's face. It mirrors the readiness of the fans for more, but also their contentment with what they've been given tonight. As the Empire empties out, one thing is evident – there's far more than a flicker of hope for the success of Niall Horan's solo career.

Horan's current single “Slow Hands” is available now, with his as yet untitled debut album to follow later this year.