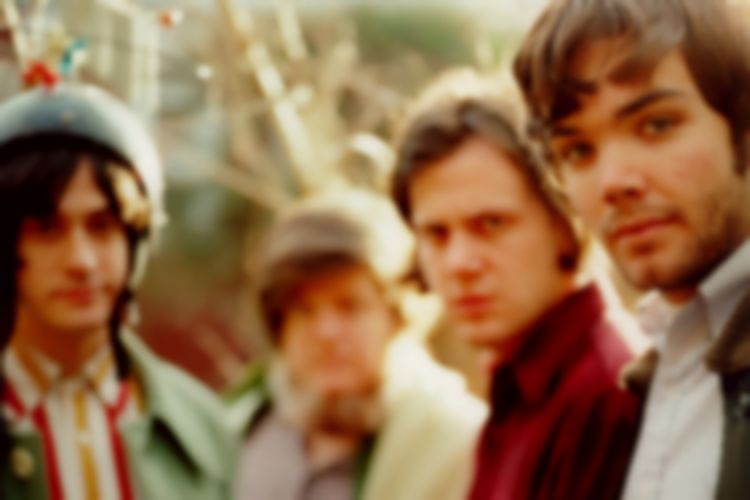 Just one year after releasing the now iconic In the Aeroplane Over the Sea in 1998, Neutral Milk Hotel disbanded and Jeff went into self-induced hiding. His girlfriend at the time claimed Mangum became paranoid about the “inevitable” post Y-2K apocalypse and began to feel tremendous guilt for his friends suffering; following this revelation he felt he and his music were powerless in saving them, and therefore of no purpose. Fortunately after some soul-searching, expeditions into Bulgarian Folk Music and DJing under the name Jefferson, he remerged last year with the band from that legendary album for a new tour.

Manchester’s Albert Hall proved an apt venue for the nostalgic feelings conjured up for older fans, although the crowd was sporting its fair share of young bearded folk. The ecclesiastical interior fittings coupled with the bands request for a ban on recording equipment added extra magic dust on what was already an evening many thought never would happen.

Jeff wondered out, trucker cap atop his head, strapped on the guitar and wasted no time in delivering “The King of Carrot Flowers, part 1” followed by parts 2 and 3, naturally. With virtually no press time, and scarce live recordings of the group, the effect was fairly overwhelming as the introduction to In the Aeroplane Over the Sea was replicated so perfectly, 16 years later.

Jeff’s guitar style is so beautifully simple; void of any embellishments he strums over the neck of his acoustic, eking out even more warmth from his fuzz-ridden tone, at its most impressive when “Holland, 1945” kicks in full band.

Not that anyone had noticed, but Jeff was in some discomfort, excusing himself early on (in the most discrete, anti-Axl Rose manner) to “throw up”, his brief return cutting short Julian’s fascinating ‘joke’ about a bloke who had half an orange as a head – there is no end to that man’s talents.

On Avery Island, the band’s debut is forever in the shadow of its famous follow-up, however new life was breathed into tracks such as “Naomi” with Jeremy Barnes acting as a real powerhouse behind the delicate horn instrumentation. NMH do everything differently; from the doomy, European execution vibes given off on “The Fool” to Julian’s singing saw on “In the Aeroplane Over the Sea” evoking that whimsical “Telstar” feeling, and of course Jeff’s voice soars so high and for so long – seriously, you can’t replicate that shit.

The set flutters between lo-fi, psychedelic folk-rock to lamenting and twisted ballads which induce a trance-like state, similar to the feeling you get listening to the whale noise section in “Echoes”. How Spotify can give related artists to a band so lyrically, musically and morally unique is beyond us. The only doubt we have regarding this band, Anne Frank influences aside, is whether we prefer Jeff or Scott’s facial hair.

With no comparisons to draw, we can only conclude that Neutral Milk Hotel were everything we all had hoped for, and more. Jeff Mangum, as humble and retiring as he is, still remains one of music’s greatest enigmas.