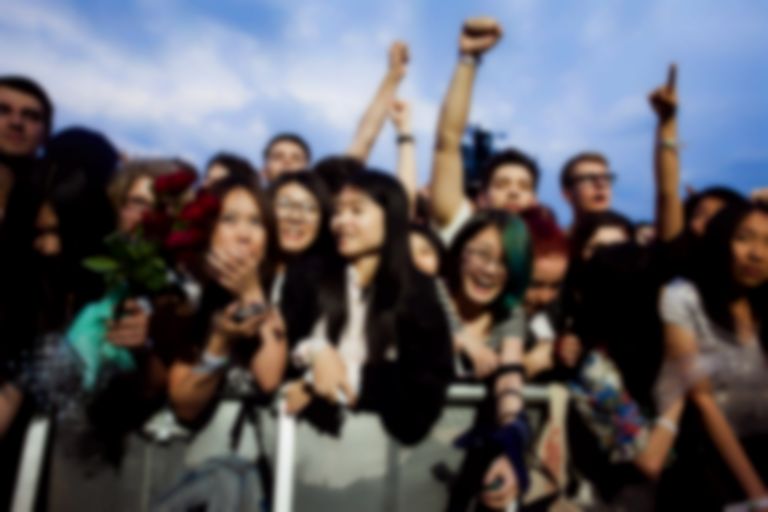 “British Summer Time”. Funny that. Street vendors wave disposable ponchos and umbrellas at punters passing by, dark clouds loom over this odd little carnival in the middle of Hyde Park.

Directly the other side of the gate is an odd, empty stage with a lonesome DJ playing to no one but still giving it. Some dancers stroll by on their way to the first bar which only sells bottles for the same price as a pint further down the line, a row of fancy food stalls opposite. 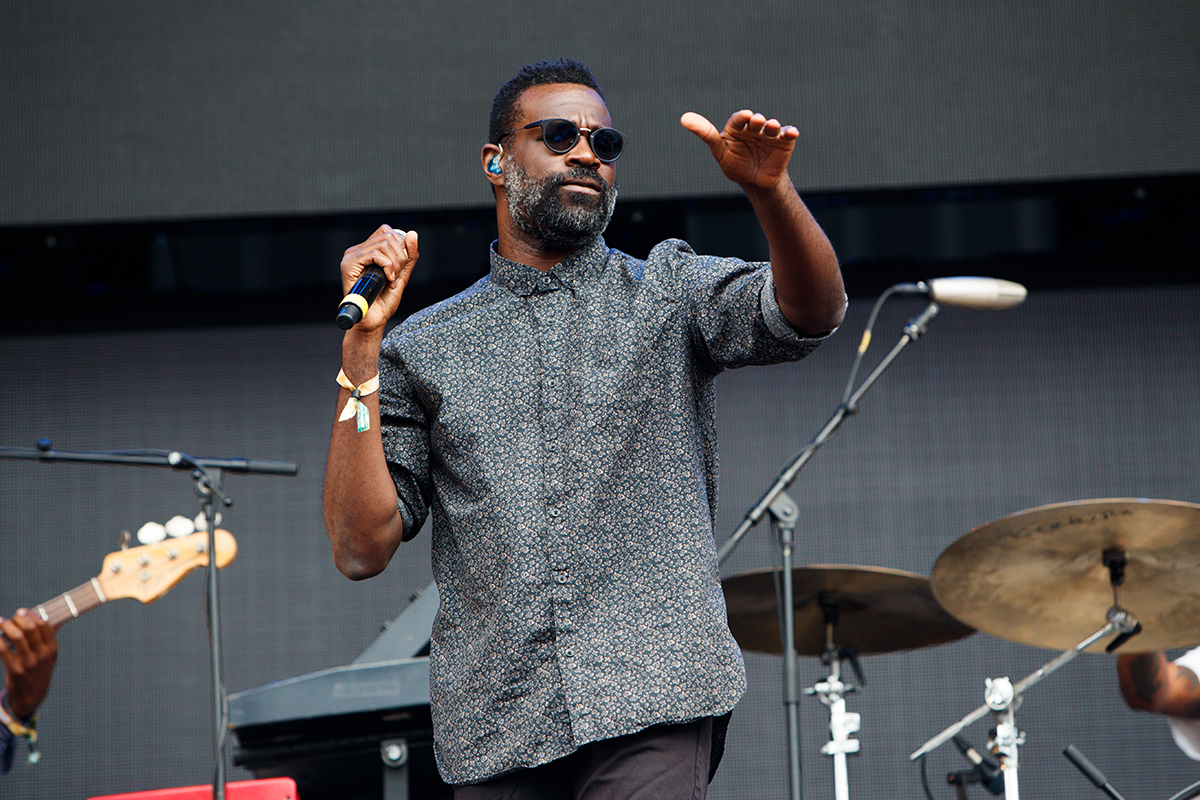 Travel issues mean I miss most of TV On The Radio, who have morphed into the elder statesmen of alt indie. Tunde and Kyp sport salt and pepper beards, still beautiful as ever. I arrive to catch "Trouble". They’re in no rush, leaning back into the groove, a far cry from the paranoid urgency of their earlier work. They end the set with a spirited run at "Staring At The Sun", punctuated by sharp trombone blasts in stark contrast to their previous number. Gutted to miss most of the set I move to console myself with a bite to eat.

Ashen haired punk poet Patti Smith seems to be at every festival going these days and I’ve seen her a good handful of times now without trying. A look at her tour dates shows at least seven gigs a month through to November, the kind of schedule that would tire a much younger band and at 69, she is every bit as commanding of your attention as she ever was. The images on screen are humble, no flash, scenes of life from around the world; London buses, Chinese children, lanterns and goldfish in New York’s Chinatown. 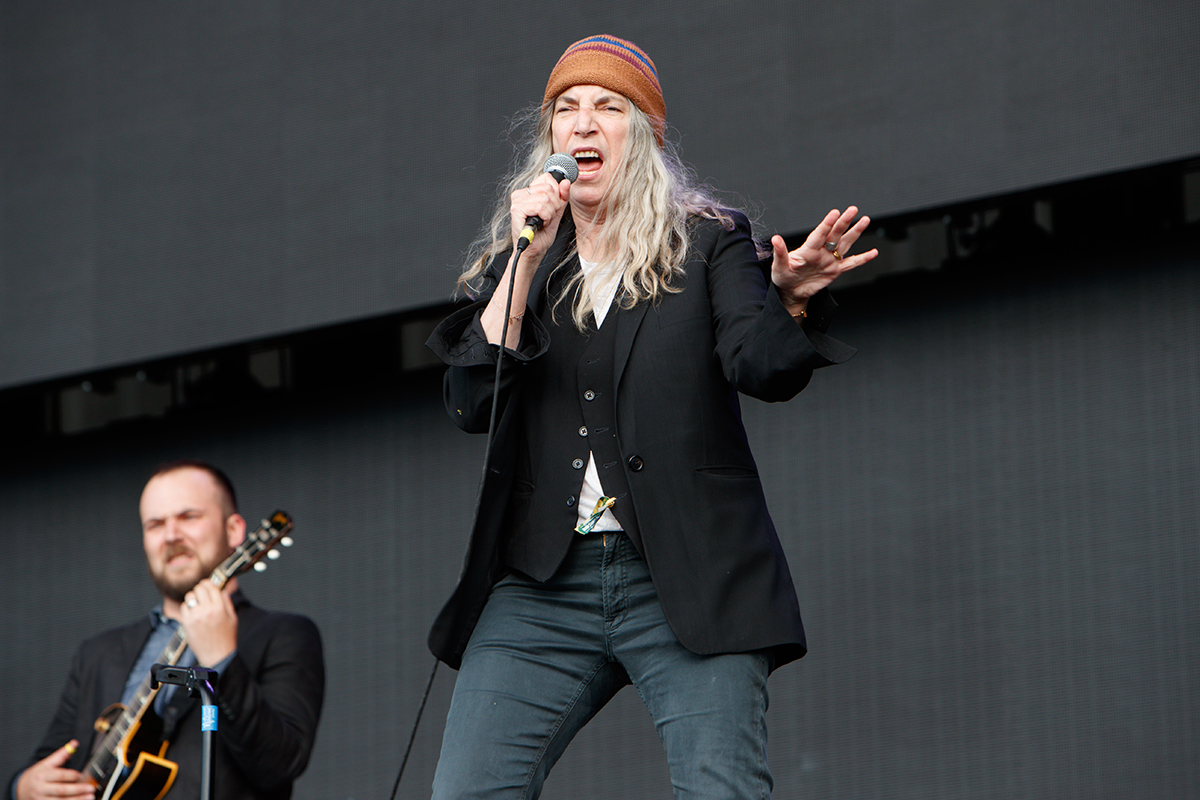 Patti’s idol status lies comfortably on the belief she has in every word and action, calling for us to remember we are free, giving love to the people of Istanbul after the recent bombing and addressing the unrest after Brexit. Her stories of loss and hope and other lives resonate and could be applied to any of the issues plaguing our world right now. "Ghost Dance" is particularly captivating as Patti urges us to “shake out the ghost” whilst the band hold firm behind her. The only time I feel she’s lost me is on their cover of "When Doves Cry", which is particularly pedestrian until she does her bit, preaching in that way only Patti can, an impassioned and imploring tribute about little purple flowers over the ending. She is full of affirmations of hope and fierce with spirit. "Privelege (Set Me Free)" makes you want to do something that matters.

Patti introduces the band, including her son Jackson on guitar. Being Patti’s son is one thing but being on stage with this maelstrom of awesome is another. "Because the Night" is introduced as a song for Jackson’s father, Fred ‘Sonic’ Smith, late guitarist of The MC5. "Horses" starts angry and vivid as always as she drives home that brand of vital angst, her growl awakening the dormant rebel spirit in us, howling through the dances; mash potato, twist, watusi, it’s not a suggestion, it’s a command, and dance we do. 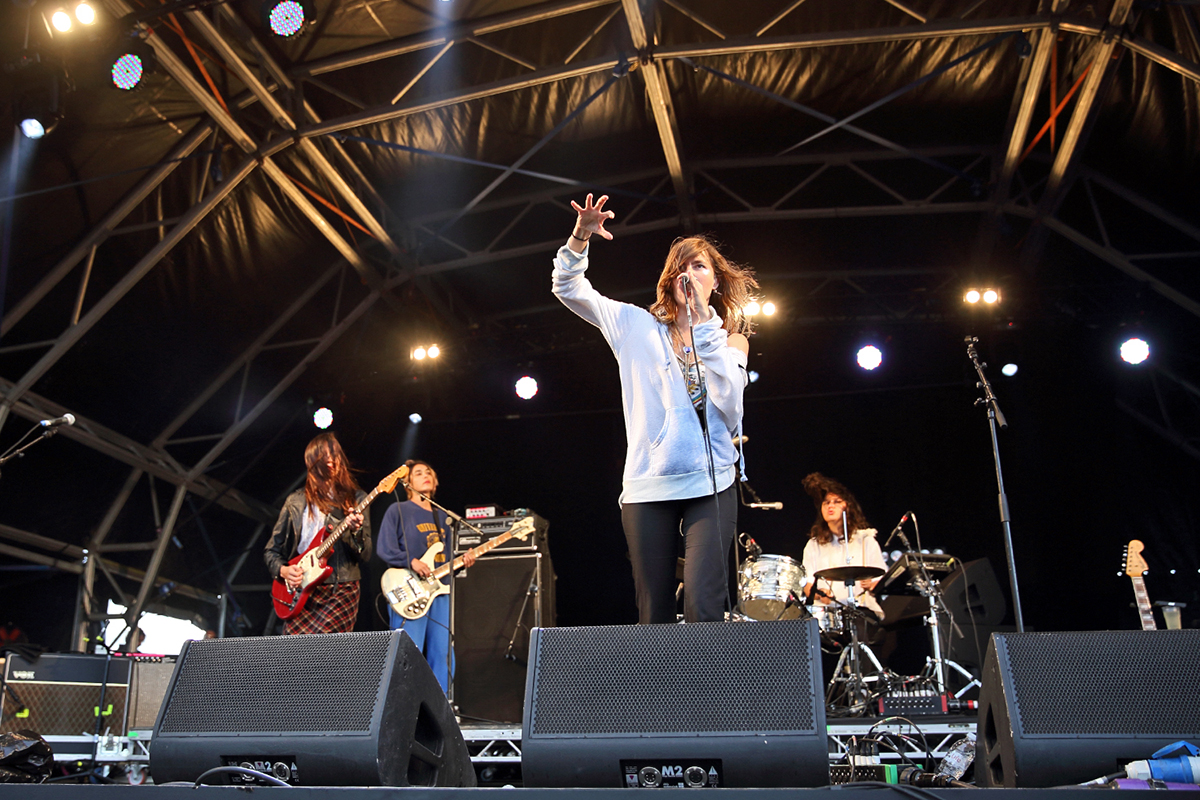 Let’s pretend for a minute that Warpaint aren’t one of the coolest bands in existence. By the time they hit second song "Undertow", Drummer Stella Mozgawa is rocking out with a pair of beaters, singer/guitarist Emily Kokal is strutting ethereally across the stage whilst guitarist/singer Theresa Wayman and bassist Jenny Lee Lindberg shuffle and wind as if the stage was their bedroom. They own this space but why they’re on such a small stage is beyond me. The sound is too restricted for their spacious psychedelia and seems the cause of a few issues on stage, not that you’d notice without intent observation. The girls power through seemingly unfazed, emanating cool and confidence, dancing seductively with each other and the crowd, winding up and down, lost in their soundscape. There’s no swagger, only joy. Emily announces how excited she is for Massive Attack with fangirl enthusiasm, crowd and band are having the best time in spite of the rain and ’Intro’ has them grooving face to face as the wind picks up whipping hair and creating contrary shapes in harmony with their movements, then comes "Love Is To Die" which is simply ridiculous. As they draw to a close with a new song, a rainbow appears and Emily urges us to take a look. "Disco//Very" ends the set as the rainbow becomes a perfect double. “Take a look! We’re cool but that’s cooler!”. No, Warpaint, you are.

I’m a sucker for two drum kits and here they flank the stage, one electronic, one acoustic. The union of the two worlds Massive Attack inhabit. "United Snakes" and "Risingson" set the tone for what will be a dark and broody night, punctuated by a disconnected sense of joy.

For a lot of people, this is a previously unrealised dream and so a giddy sense of excitement is in the air. Mezzanine was a musical revolution for me so naturally, I’m excited for this my second time seeing them but all is not well. “We wrote this around the birth of the EU and we never thought we’d be playing it as a requiem 20 years later”, 3D says of "Eurochild". “As the sons of immigrants, we’re disappointed but we have to move on together”. The screens are riddled with topical displays, making no bones about recent events but never coming across as preachy or forceful. “No visa for Ibiza,” reads the strip of text across stage, along with newspaper headlines and speech bytes; “you touched it last; divided; proud; delusional; united is strength; better together, bigot, idiot, fool, breaking point, save us from ourselves”.

"Future Proof" has a display of binary that builds in intensity, starting slowly to become an overwhelming barrage of 1s and 0s flashing faster and brighter, a suggestion that technology is becoming too much?  TVOTR’s Tunde is welcomed back to the stage for "Pray For Rain", his sobering vocal like a moment of calm over the crowd. “Lazarus,” 3D proclaims as they literally wheel on next guest Horace Andy, leg in a cast for a killer version of "Angel". “Straight back to hospital,” says Horace as they wheel him back off. They’re like a tonk greyhound, lean and muscular, quick to the idea but not labouring the point. 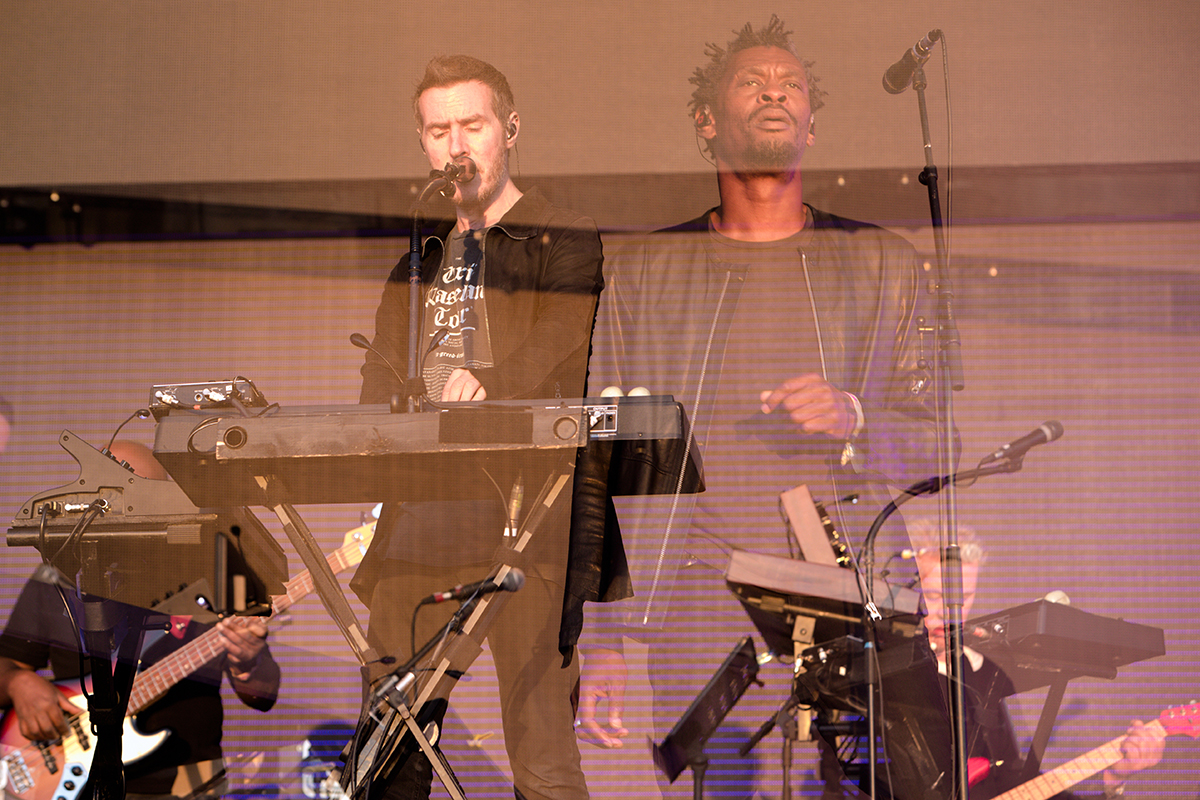 "Voodoo In My Blood" sees Young Fathers join them onstage, adding a rabble energy. All the while, airport codes flash up on screen; LHR, BER, LAX, DME, INN, JFK followed by departure times, then cancelled, then ‘BORDER CLOSED’ in red, a vision of where we’re headed. The scariest part of this being that a lot of these visuals have been in use since much earlier in the year now more relevant than ever. "Shame" is dedicated to “Michael Gove and Boris Johnson, the lying bastards”, the very mention of their names eliciting boos. The names and logos of major corporations like Shell, Tesco, Rolex, Siemens, Land Rover and others now fill the screens. "He Needs Me" sees the flags of Arab nations and Western superpowers flash up on screen adding to the air of discontent.

Tricky joins them for the first time in 20 years for "Take It There", furthering the idea of unity and togetherness moving forward, the screen now reading “for the greatness of human progress, join, hope, share, accept, trust’ but it doesn’t stop people throwing bottles into the crowd. "Safe From Harm" is particularly haunting as images and names and dates of historical libraries, artworks and monuments, safe from us for hundreds of years, now decimated, are played behind the band. This feels like a soundtrack to the end of the world, a spellbinding dread washes over me and for anyone paying attention it’s impossible not to be moved. The dates turn into data, resigned to fact, a reminder we are powerless unless we act. As the song ends, the lights shine bright on the audience like a call to action; ‘what will you do?’.

The images continue; refugees, a mountain of discarded lifejackets, a child’s drawing of a Taliban beheading, a plea from a child written on a paper placard to open the borders to Macedonia, completely lost on the revellers shouting “one more song!”. The images repeat, UNHCR details take centre stage as the orchestra set up for "Unfinished Sympathy". “We are in this together” 3D proclaims one last time as the crowd roars. It’s hard to believe anyone can be leaving in high spirits after what we’ve just seen but it seems eerily indicative of the divides that exist in our society right now. Those that are affected directly, those that are hurting empathetically, those that are oblivious and those that simply don’t care.  The case for progressive unity has been made, the rest is up to us.