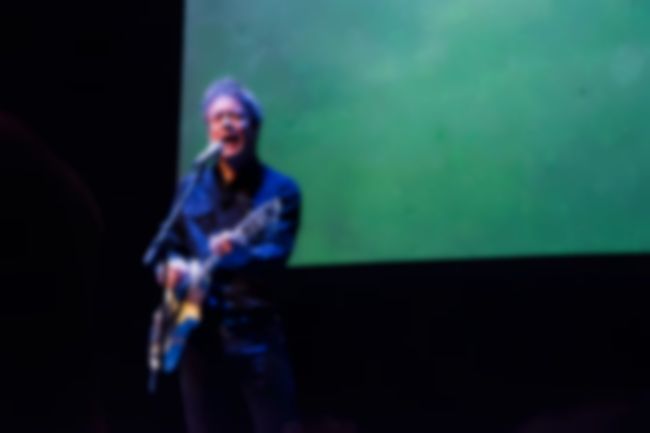 Naming livelier bands than Low is easy. It’s… well, it’s pretty much all of them. But lovelier ones? That’s a struggle.

The Duluth, Minnesota three piece are now at a stage in their career where they only play places that befit said loveliness. Their trips to London haven’t included a toilet circuit venue in many a year, with them now a regular feature on bills at places like the Royal Festival Hall, tonight’s home The Barbican, and in all likelihood private audiences with the Queen at Buckingham Palace. Well, they wouldn’t seem out of place.

Despite their increasingly grandiose venue choices, Low’s sound remains as tantalisingly subtle as ever. Alan Sparhawk plays guitar through a miniscule amplifier, Mimi Parker’s drum kit is as sparse as her hitting of it, and their audience is so hushed and attuned to what it is Low do that one wonders if the pair even need to approach a microphone when they sing; us lot would gladly just listen a bit more closely if they chose to ditch them. It’s this delicacy to their playing that makes them such an enticing live prospect – what they create is so fragile that one stares on baffled at how it doesn’t crack apart under the slightest scrutiny.

This isn’t the case with Low on record, or at least not all the time. LPs such as the Dave Fridmann-produced The Great Destroyer and new effort The Invisible Way (helmed by Wilco’s Jeff Tweedy) pack a considerable punch, yet when stripped back to just guitar, drums, vocals, bass and occasional piano, they shine in virtue of being comparatively skeletal. The Great Destroyer provides us with three tunes tonight, a menacing pairing of ‘Monkey’ and ‘Pissing’, and an unplanned encore inclusion for fan-requested beauty ‘When I Go Deaf’, but it’s The Invisible Way that we get to know best. No less than nine tracks, almost half the set list, are brand new Low numbers.

The reason nobody seems to mind is that their most recent record is one of their best for a while, with songs like the opening ‘Plastic Cup’ (which contains the first of two uses of the word “piss” this evening – really, guys) and utterly majestic ‘So Blue’ sounding like sisters to more time-honoured Low classics such as the ever-beautiful and deceptively sinister ‘In Metal’, despite their being born of quite different bands, decades apart. The main change has been in personnel, with new member Steve Garrington adding delicate piano flourishes and a muscular bass guitar grounding to songs that would otherwise be in danger of flying away, such is their gentile splendour.

Low seem happy to be playing, which is great, because that can’t be said for all of their shows. Tonight however, they seem in a generous mood, and genuinely touched at our esteem for their performance. Though it’s heavy on new material, when their set makes pit stops in their back catalogue, their selections are expertly picked, and clearly tailored to long term fans (‘Soon’ from Secret Name, ‘Words’ from their debut I Could Live In Hope). These guys seem happy and humbled, despite playing to audiences this reverent as standard now. Smiling suits Low; though their tales of murder and piss are plentiful, when you walk away from one of their gigs, it’s their loveliness that’s most prominently on your mind.