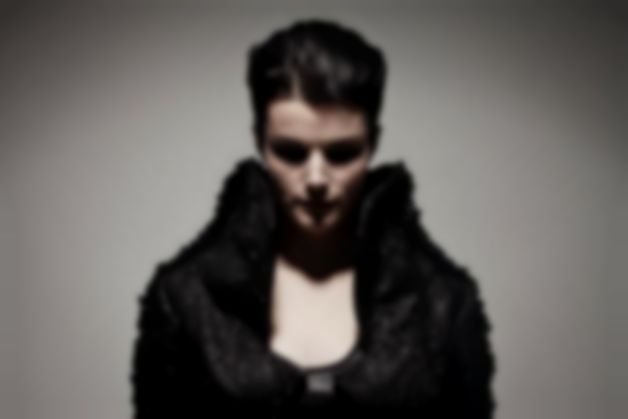 Upon hearing that tonight’s Karin Park support not only hailed from East London, but had commandeered their band name from a relatively obscure Francois Truffault short, my pretention klaxon immediately began blaring with abandon. But Les Mistons turned out to be a real find; ambitious and epic in scope.

With a sound that flitted between M83 anthemics, Oberhofer-esque indie-pop and brooding synth rock, they definitely have the potential to appeal to much wider audiences, and although the three-piece occasionally overreached themselves, it was in all a striking and highly impressive performance.

The prelude to Karin’s set, involving a pig mask wearing, white-cloaked figure chanting over unsettling looped vocals was also striking, albeit in a rather self-indulgent fashion. Thankfully, once Karin Park made her entrance, needless gimmickry was no longer required.

The Swedish songstress cuts a striking figure; raven haired, clad in the sort of attire only a 6ft 3 tall model could get away with, but it’s her voice that deservedly grabs the attention. The immediate comparison is Björk – although Karin’s vocals are smoother, their vocals share the same timbre and power, and when fully unleashed, they inexorably send shivers down your spine.

Initially, her demeanour was as glacially Nordic as her countrywoman Karin Dreijer-Andersson (Fever Ray, The Knife), a perfect fit for the moody electro-pop she specialises in, but resulted in a barrier between herself and the audience. It’s only when the ice-maiden persona melts to reveal her true sultry charm that things truly hit their stride. (Well, the keytar helped too).

Her percussionist brother David, a long haired Thor lookalike, was the only other person on stage, but the “less-is-more” philosophy worked in their favour- it gave the show a greater sense of intimacy. Some of the songs blended into each other, especially in the latter half of the set, but generally her atmospheric, discordant disco (most notably Explosions’) hit the mark and confirmed her as one of the more intriguing rising stars of the Swedish pop scene.