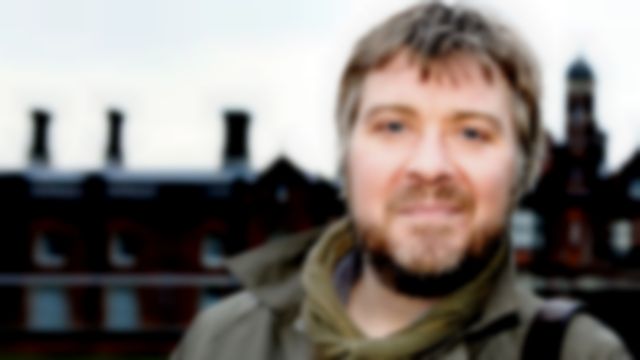 A beautiful sunny evening in London, on the warmest day of the year so far, feels like the perfect time to spend in the company of Jimi Goodwin, his new band and the wonderful new songs from his first solo record Odludek. With his alma mater Doves on a hiatus, tonight sees him revelling in a new found freedom, which shines through in new songs that retain the Doves brooding melancholy but with some added playfulness. His intention for the record was to recreate what the best mix tapes do, a compilation of eclectic songs that fit a theme, and the theme tonight is happiness.

Islington Town Hall is a fantastically old fashioned venue – there are ashtrays behind the seats – but tonight isn’t an exercise in nostalgia, the songs of Odludek break new ground. Though Goodwin played most of the instruments on the record, live it’s very much a group effort and the recent arena concerts with Elbow have obviously tightened them up. Tonight the musical star of the show is Goodwin’s voice, not quite a Basso profondo but it’s so deep and resonant you can feel its vibrations in your bones.

Opening under the starry romance of a glitterball and without any fuss they tear straight into “Terracotta Warrior”. It’s powerfully staccato, so far so Doves, but it works perfectly as a link to his past and an introduction to his present. Other songs see him spread his musical wings further than when he was a dove, with the Bert Jansch-esque ‘Didsbury Girl’ starting with bursts of Motown guitar and then effortlessly moving into a bittersweet lament, it’s tremendously romantic.

”Live Like A River” is a brilliantly out there rave tune, think “Vida La Vida” but 100 times better. It could be his breakthrough when he plays the festival circuit this summer, euphoric, epic and doleful at the same time.

Recent single “Oh! Whiskey” sounds like a Mancunian Bob Dylan, with its acoustic groove, harmonica and beat poet riffing over the top. It’s an ode to the dangers of over indulgence and sounds lovely tonight, as warm as the sun kissed weather outside. It’s rapturously received, a homecoming song from a prodigal son.

The enviable back catalogue isn’t ignored - “Snowden” is the first Doves song to appear, and the energy level of the room rises even further for this magical piece of space rock. “The Last Broadcast”, sounds both lachrymose and defiant and the crowd are still singing the refrain like a terrace at a football match as the last song, “Lonely At The Drop”, kicks in. It’s a power-pop smack round the face and a reminder that his current material is just as good as his earlier work.

The celebration continues into the encores, as he defies the venue curfew to play four songs, busts some breakdance moves, starts singing “Streets of Kenny” by Shack several times and, telling the crowd off when they request Doves songs, he reprises ‘Oh! Whiskey’ instead.

Whilst there’s a slight sadness in seeing him fly solo, with songs and a performance as uplifting as this you should put that to one side, as Jimi Goodwin has. As everyone leaves it’s night time, but given the warmth and brightness of the performance it still feels sunny. Jimi Goodwin and his marvellous band will bring the house down at this summer’s festivals.