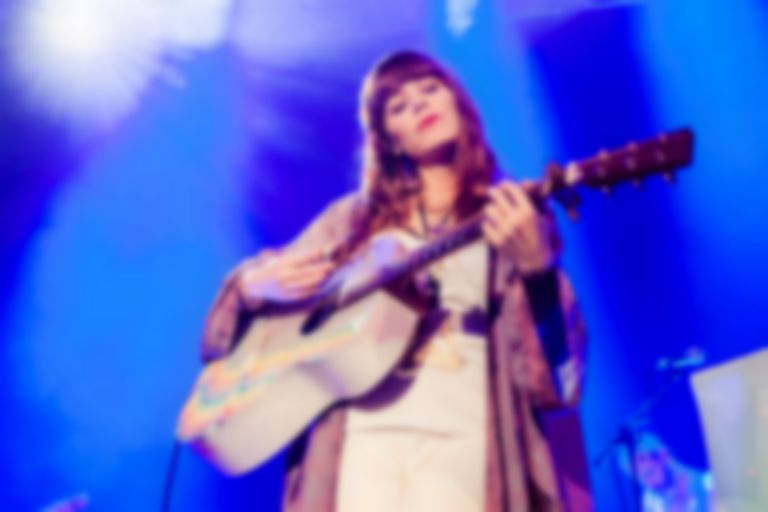 If you've ever tried to wear an all-white suit before, you’llno doubt realise it’s not an easy ensemble to pull off. In fact, it's near impossible (and should probably be avoided by the majority of us.) However, here comes Jenny Lewis, in all her red-haired brilliance, strutting around the stage in a fantastic white suit adorned with magical rainbows reminiscent of My Little Pony, giving us all a masterclass in rock'n'roll sassiness - and how exactly one should wear an all-white suit.

The stage similarly follows the same children's cartoon theme, with Lewis' acoustic electric guitar as well as the piano, and a box she simply uses as something to stand on all made to match. It gives off this kind of magical, juvenile feel, but doesn’t divert the attention away from the night's leading lady - it simply acts as a background that adds to the magic of the evening.

Opening the night with the much loved Rilo Kiley song “Silver Lining”, gets the gears in motion for how the night will pan out, with a rich mixture of songs that span the expanse of her music career. However, the main focus of the set surrounds her latest solo effort The Voyager, released earlier this year to much critical acclaim. Latest single “Just One of the Guys”, whose video featured actresses such as Anne Hathaway and Kristen Stewart, is performed with such ease and sounds perfectly glorious, with the line “When I look at myself, all I can see/I'm just another lady without a baby” ringing out more tenderly than ever.

The first thing that hits you when seeing Jenny Lewis live setting is how effortless her voice is; the way it twangs and then performs incredible tricks that make you jump out of your skin as her silky-vocals creep up and down your spine is divine. Even at its most exposed, it is faultless, and is able to transform the mood in any way possible.

Throughout the set, Lewis seems to change characters and transform and play about with her stage presence. When playing Rilo Kiley's “The Moneymaker” she becomes this badass goddess that struts to the deep seated groove and explodes with energy to the jagged-edged chorus. Then, it comes to “Bad Man's World”, and she’s seated at the piano playing out a stripped-down, jazzed up rendition of the song, and becomes the soulful songstress. Her vocals are beautifully supported by her backing singer, and the transformation between her characters gives the live show a more sophisticated and contrasting feel.

But there are also moments where this all-American show has another transformative feel, as songs like “Aloha and the Three Johns” seem to take you away to some alternative country hang-out somewhere in the ‘States, and Islington seems as though it is a million miles away. A particularly beautiful and ironic moment arises when Lewis sings out that 'she looks awful in white', whilst shimmying around in her white suit looking like something out of a movie.

She begins the encore with a perfectly executed three piece harmony during “With Arms Outstretched” that leaves you weak at the knees. Energy, beautiful harmonies and a tight knit band drive the evening forward to a high spirited ending. Drawing the night to a close is a heart-breaking “She's Not Me” that results in Lewis throwing out bunches of pink roses into the crowd, standing on top of her box to get a better look of the awe-struck audience and seeming to be very pleased with what she's seeing in front of her, as she bows for the final time and leaves her band to jam out to the final few bars.