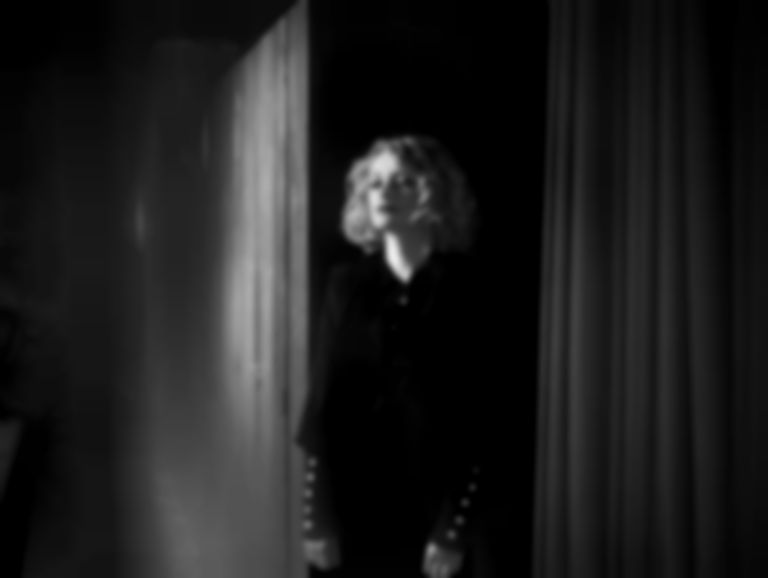 Following a successful live performance of their new album with the RNCM String Orchestra at Manchester International Festival last week, Goldfrapp return to London for a special show as part of the Somerset House Summer Series.

The evening is an interesting study in the dichotomous discography of this consistently fascinating act, as Will Gregory and Alison Goldfrapp’s sound changes course from darkly cinematic to foot-stomping glam dance. There is some coherence in the moves between the different genres they embrace on record, and tonight the live experience sees a build-up from the moody, quiet enchanters to the hands-in-the-air anthemics.

Opener, ‘Paper Bag’, greets you with an instant reminder of Alison Goldfrapp’s rich and bracing tones. Dressed in a billowy, black Ralph & Russo design, the wind plays with her sleeves and her hair, as her voice soars. She follows this with the gorgeous ‘Clowns’, which is faithful to its Seventh Tree original, before moving on to three new tracks from forthcoming record, Tales Of Us. First up is ‘Stranger’, a delicate nod to the Felt Mountain era, linking beautifully to ‘Alvar’, a song inspired by a visit Goldfrapp paid to Iceland. It is underlined by thumping guitars which duet effectively with Goldfrapp’s voice. ‘Clay’, the new album’s closing track, shows off a strong chorus and the lighting arrangement here matches it powerfully.

Supernature‘s ‘You Never Know’ and ‘Number 1′ really get the crowd going before bringing out 2009′s ‘A&E’, which reaffirms itself as one of Goldfrapp’s finest compositions.

The only track from previous long-player to come out to play tonight is ‘Shiny & Warm’, but perhaps Head First’s highlight, ‘Dreaming’, would have sat better among its other set-mates.

A boisterous version of ‘Ride A White Horse’ comes complete with an extended outro, which combines the single mix’s “I’m gonna ride on a white horse” refrain and demonstrates how, eight years later, this song still sounds fresh. As a thumping ‘Ooh La La’ comes to a triumphant end, Goldfrapp explains that had it not been for her sister introducing her to Mark Bolan’s music, that song would never have come about.

Last week Goldfrapp revealed ‘Drew’, the first single and video from Tales Of Us. This orchestral tug at the heartstrings opens the encore section and, together with ‘Little Bird’ and ’Black Cherry’, brings a soft calm before the storm of explosive finale double-whammy, ‘Train’ and ‘Strict Machine’. It’s a varied, wonderful show, this, and it certainly whets our appetite for the new album.