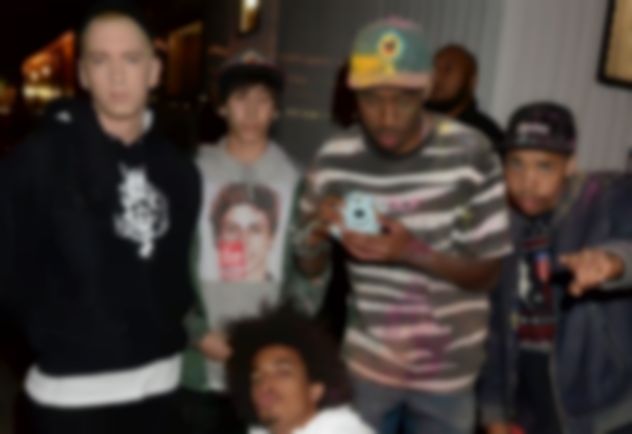 The bill tonight is an interesting prospect: one that provides its own ascendency of rap’s most unquantifiable players. First, there is the album-self-releasing subversion of Danny Brown. After which there is Odd Future, with their vibrant defiance of just about any label levied on them. All of which is headlined, of course, by Eminem, whose reputation for disquiet was cemented around the time he started penning fantasies of murdering his immediate family (which would be since the beginning of his career, then).

Kicking things off, Danny Brown does a fine job of whipping the building crowd into shape for what is to come. Wearing a black Frank Zappa t-shirt, he rattles through tracks from the self-released XXX and 2013’s Old with comfortable aplomb, throwing out the obligatory battle orders of “London, make some noise!”. Whether he’s contorting his vocal chords into a guttural shriek on “Break It (Go)” or instigating mass singalongs on set standout “Smokin & Drinkin”, Brown tonight proves why he is one of rap’s most exciting and individual upstarts, and why his talents are completely at home on a stage as big as this.

Up next is the brash and barmy hooliganism of Odd Future, a band whose modus operandi is to have as much fun as possible, and hope that the audience follows suit. There’s no suggestion tonight will buck the trend as the now gargantuan crowd pogos around whilst Tyler, the Creator and his band of roguish cohorts trade lines and loon about. One lasting image is that of the talismanic Tyler jumping through the inflatable “OF” donut logo adorning the stage. For a band still surfing the wave of hype generated a couple of years back, their joie de vivre is reason alone to be excited for whatever new material awaits.

And then of course, there is the man these 60,000-odd people travelled across the far reaches of the UK (and beyond) to see; a man of such presence that he answers to not one but three names. Eminem, Slim Shady, Marshall Mathers III - whichever you prefer - takes to the stage following a rousing videotape retelling the narrative of hit track “Stan” (that jovial romp following one man from fandom to obsession to murderous domestic violence), and the voluminous cheers that greet him never really let up. Bursting into “Bad Guy” with a ferocious intensity, it’s clear that Eminem, now into his forties, is still every bit as vital a presence as ever.

And yet one thing is clear. Despite all of Slim Shady’s bluster and hard-cultivated status as one of pop-culture’s premier agitators, tonight he appears the consummate professional. Clean and sober for years, the performance tonight is slick, polished and tight. Last time he played London, it was to the disgust of women’s rights protesters and he took to the stage in a hockey mask, brandishing a chainsaw. Tonight he plays it a tad more understated in shorts, t-shirt (albeit emblazoned with that iconoclastic mask, this time given a Union Jack makeover) and baseball cap.

The onslaught of noise is visceral and having a full band onstage really adds dynamism. Odd Future, for all the fun that they are, lack that visceral sonic punch (something they compensate for with gall and snarl). Every song tonight is given punch, from the frustrated “The Way I Am” to the downright flagburning “Mosh”. Even the maudlin mega-hit “Stan” is tonight cocksure and brimming with gusto, becoming something of a grimey dirge in the process.

It wouldn’t be a headline-grabbing rap gig without some A-list collaborating, and tonight must be up there with the best of them - perhaps discounting Tupac’s guest spot with Snoop Dogg at Coachella last year - with Dr. Dre taking to the stage to blast through a few hits, the pick of which is the now-iconic “Still D.R.E” and the once-ubiquitous “Forgot about Dre”. If seeing 60,000 people flopping their aloft arms forward in a lever-like parabola was ever on my bucket list, tonight it is ticked off.

Lip service is also paid to the Eminem of yesteryear. The less grumpy, more mischievous entity that put out earworms such as “My Name Is”, “The Real Slim Shady”, and “Without Me”, gets a fleeting airing tonight with a medley of “My Name Is”, “The Real Slim Shady”, and (you guessed it) “Without Me”. For a long while, I was never a huge fan of hearing the hits in one rapidfire medley, but having seen Prince do it earlier this year and seeing Slim do it tonight, I’m a convert. It’s utterly jubilant and silly, in just the right way, barely giving the audience time to process what’s going as one bombastic mega-chorus jumpstarts another.

With an encore of “Lose Yourself”, Eminem laps up the adulation and auspiciously returns it with two raised middle fingers. It says something of his powers of subversion that two offensive pronged digits come accross as a term of endearment, and it cements Eminem’s reluctant occupancy amongst the top of the showbiz tree. After all, two nights at Wembley Stadium isn’t awarded to just anyone; not even Man City managed it last year. So Marshall Mathers III AKA Slim Shady AKA Eminem, at once a hook-spinning genius and counter-cultural iconoclast, leaves London triumphant. We can only hope it’s not another decade until his return.