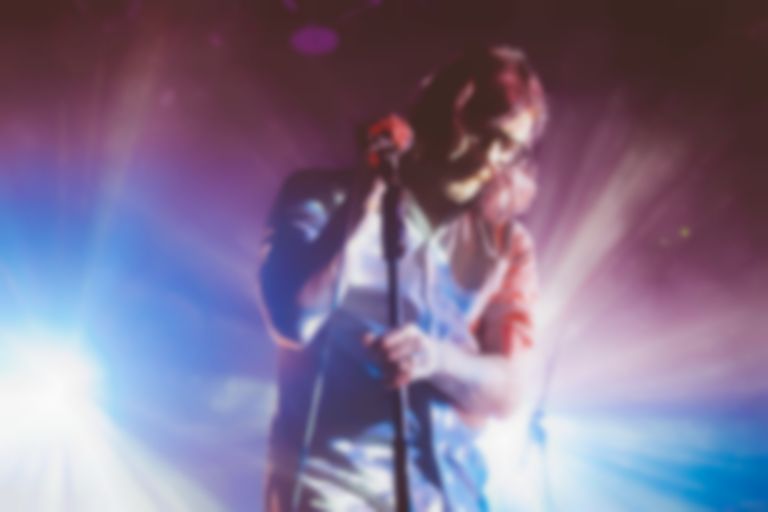 Last week, at the start of this European tour, Matt Berninger spent some of his downtime conducting a Facebook Q&A with fans.

One of the first questions to filter through to him in his Copenhagen hotel room asked if he was having a mid-life crisis. He quickly answered in the affirmative; “have you seen my hair?”, he said, gesturing to the shaggy, untamed locks that don’t appear to have been significantly interfered with since I last saw him on stage, at the O2 Arena last November with The National.

Mid-life crisis seems like an uncharitable way to go about terming it, but Berninger definitely seems to have been having an uncharacteristic amount of fun since he launched EL VY with his old friend, Brent Knopf of Menomena, back in August. Perhaps it’s the lifting of the critical expectation and emotional introspection that are generally demanded of him in his day job, but if you’d told me last year, on that foggy night in Docklands, that the next time I’d see this guy in the flesh, he’d be delivering a raucous rendition of a song about autoerotic asphyxiation - and not even for the first time that night - I’d have offered you long odds on the prospect.

And, yet, here he is tonight (Manchester Gorilla, 12th December), dressed all in white - a far cry from his usual three-piece suit get-up. And here’s Knopf, too, who displayed so much subtlety and intelligence in the way he wove appropriately experimental soundscapes for his old pal on Return to the Moon, the album they put out together back in October. Knopf took light-hearted umbrage with the predisposition of reviewers to focus on Berninger’s contributions, rather than his own, during that Facebook Q&A, leaving comments under his personal account along the lines of, “If I write a 900-page novel, and you write the foreword, do you think the reviews will mention my name?”, but it’s not just his relative lack of profile in comparison with his bandmate - it’s his unassuming stage manner, too, that has likely played a part in that. He switches between synths and guitar in understated fashion tonight, allowing Berninger to take centre stage.

And that he does. Everything about this project seems to have allowed him to undo his proverbial collar. He’s clearly relishing being back in such intimate surroundings - Gorilla holds about 600 people, at a squeeze - and the gusto and energy that he uses sparingly with The National for the sake of effect - the explosions in the latter parts of “Squalor Victoria” and “Humiliation”, the trips through the crowd for “Mr. November” or “Terrible Love” - are deployed much more evenly tonight.

“Careless” provides an atmospheric, low-key opening, and that’s not necessarily what this rowdy Saturday night crowd wants; “It’s a Game” and “Sleepin’ Light” are beautiful on record and faithfully recreated, but inevitably inspire a lull in the audience’s energy. It’s not until the pulsating one-two of “Sad Case” and “Happiness, Missouri” - especially the latter’s roaring guitar - that there’s some vim and vigour that begins to build inexorably. “Return to the Moon” inspires a full-scale singalong - “the first time anybody’s ever sung the ‘Serpentine wall’ line back at us”, says Berninger - and “I’m the Man to Be”, scored through with a infectious groove and lyrically toeing the line between the sublime and the ridiculous, is similarly well-received, with Berninger peaceful, apparently, “cos my dick’s in sunlight.”

Perhaps the standout from the crowd’s point of view, though, is a gloriously well-pitched cover of Fine Young Cannibals’ “She Drives Me Crazy”. It’s pure karaoke in the best possible way, with the crowd just about long enough in the tooth to be able to throw themselves unabashedly into proceedings. This is the penultimate show of this tour and, possibly, of EL VY’s existence; at the very least, it’s going to be some years before both men find the requisite room in their schedules again. It’s fitting, then, that this gig - closed out with a second, even brasher run through “I’m the Man to Be” - feels so celebratory; band and crowd both having a ball and, in the process, giving a short-lived, but brilliantly executed, side project the send-off it deserves.