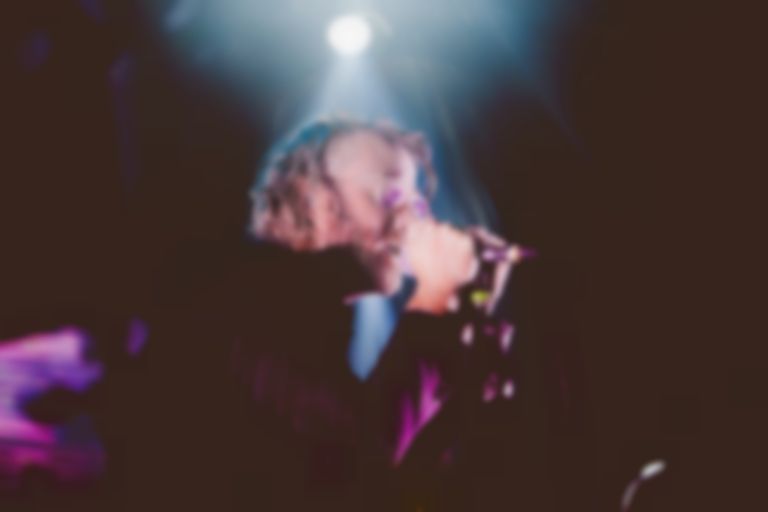 “This one’s for the Buffalo Bar.”

It’s not really a shocker to hear Matt Berninger pay tribute to the under-threat London rock club at which The National played one of their first shows on these shores; he and his band very much give off the impression, tonight, that they’ve found themselves under the monolithic dome of everybody’s favourite former white elephant purely by chance, when in fact the opposite is true. Put simply, they’re here because they’ve earned it. Theirs has been a slow simmer towards success. Bryce Dessner rambles some disbelieving thanks halfway through the show, like he isn’t the guy partly responsible for some of the greatest records of the past decade. They are almost frustratingly modest; Woody Allen’s caricature of Ernest Hemingway from Midnight in Paris springs to mind. “You’re too self-effacing! If you’re a writer, declare yourself the best writer!”

And The National are the best. They are the best ‘indie rock’ band, for however much that term is worth, currently playing music. Their last four records have all been of outstanding quality, and I’m of the generally unpopular opinion that Trouble Will Find Me - the album they’re seeing off tonight - is their best. I’m convinced people will change their minds about that as time passes; it’s better than Boxer and it’s better than High Violet, although that’s not to say that either of those LPs are overlooked tonight. It’s a greatest hits set, and accordingly, the likes of “Conversation 16”, “Bloodbuzz Ohio”, “Slow Show” and “Fake Empire” are all present and correct.

The real onus, though, is on Trouble Will Find Me, and with good reason. Berninger is on the lyrical form of his life on that album; show opener “Don’t Swallow the Cap” tackles the separation anxiety that, after tonight, he won’t have to worry about for a while - “is it time to leave? Is it time to think about what I want to say to the girls at the door?” - whilst “I Should Live in Salt” is a gorgeous, self-deprecating ode to his younger brother Tom, who’s turbulent relationship with Matt’s success was brilliantly documented in his road doc, Mistaken for Strangers.

“Hard to Find” is an exercise in restrained beauty; it’s barely there, just Berninger’s aching vocal and a wandering guitar. It’s so good, in fact, that I’m willing to overlook one of my greatest linguistic pet peeves, the shortening of ‘probably’ to ‘prob’ly’. “Sea of Love” still hasn’t been renamed to better reflect its violent nature - I suspect “Malestrom of Love” would be more accurate - but those impassioned howls over the manic closing stages (“what did Harvard teach you?”) ring truer than ever. “This Is the Last Time” continues to nail the ins and outs of an unhealthy relationship, in every sense - “I’ve got Tylenol and beer” - and the landscape change towards the end is neatly borne out tonight by the accompanying strings. And then, there’s “Graceless” - The National displaying their mastery of the slow burn, as the track gradually becomes more aggressive as it goes along.

That’s what separates them from their peers - who else reinterprets their material for the stage so intelligently? When you listen to the studio version of “Squalor Victoria” these days, it feels reserved to the point of disappointment - Berninger doesn’t explode into that final barrage the way he does tonight. To that end, it’s a huge shame that “Humiliation” doesn’t make this evening’s cut, given the way the band have been given to bursting into an erratic and abrasive outro when playing it live. “Afraid of Everyone”, Berninger’s documentation of his early fatherhood nerves, seems so much more visceral when he’s screaming those climactic lines out to thousands of people who are bouncing them back at him.

There’s room for the quieter moments, too - “we’ll just play this once”, Berninger says before “Sorrow”, a nod to the project they undertook last year that saw them run through the High Violet track no fewer than one hundred and five times in a row as part of an art installation in New York. The seldom-aired “Guest Room” is as poignant as on record, whilst one of their most lyrically oblique efforts, “All the Wine” - “I’m a perfect piece of ass” - is again bang on the money, as Berninger puts away a prodigious amount of plonk, as is now his signature. It’s the last show of the tour, after all.

The band’s encore is a smartly honed, and well-oiled, machine; the riotous “Terrible Love” and “Mr. November” are staples, but you have to wonder why “About Today”, which precedes the brief interval, isn't. It has to be undroppable, at this point. To say it’s The National in microcosm would probably be to use that word disingenuously, given that it runs at longer than its four-minute recorded duration on stage, but it certainly sums up everything that sets them apart. The version of it that Vincent Moon shot for his A Skin, A Night film at the Apollo in Manchester a decade or so ago was astonishing in its intensity - especially considering they were only the support act that night - and tonight isn’t far behind. “Ada”, meanwhile, opens the encore, and segues seamlessly into a brief rendition of Sufjan Stevens’ “Chicago” at the climax; he’s here tonight, and radiates genuine joy in being a part of the outfit. He helps out with backing vocals and a few instruments, although you suspect he’d have happily come along just to make the tea.

By the time the rest of the band begin their last “Vanderlyle Crybaby Geeks” for what will surely be a good long while, Berninger hasn’t quite made it back to the stage from one of his trademark journeys through the crowd. It doesn’t matter, of course; the audience cover for him. They always do. This arena is cavernous, but it surely hasn’t ever felt as intimate as it did during that last singalong. Then again, this wasn’t a one-off. They won’t be playing Brixton next time, or even Ally Pally. They’ll be back in a room of this size again, and they’ll still be at the very top of the indie rock tree.