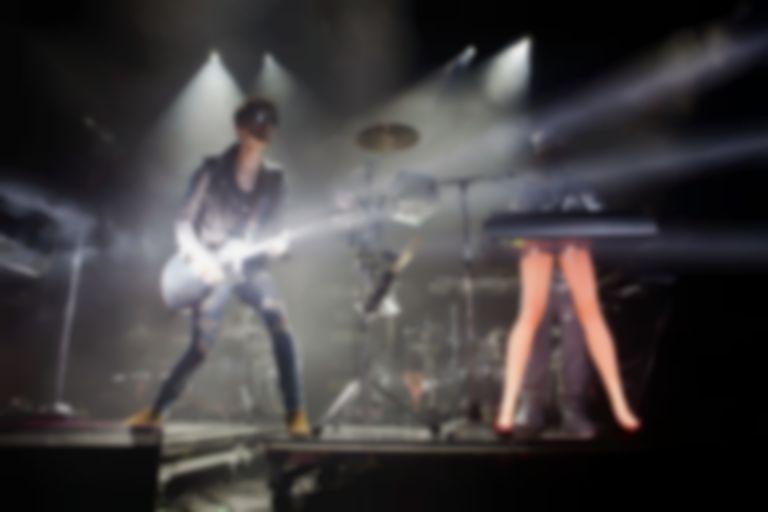 Ten years since their first record, it’s still difficult to gauge how much irony we’re meant to read into Chromeo’s act. Is the whole thing delivered with straight faced seriousness, or is the band some sort of satirical performance? Many find the silliness of it all alienating but, whatever you think of them, you have to credit Chromeo for their utter, unblinking commitment to absolute ridiculousness.

The act translates well to venues like the Roundhouse, filling the space as much with showboating spectacle as they do electro-funk. (Halfway through the set, they reminisce about their first London show in the Water Rats. It’s hard to imagine Chromeo even existing in that context now).

The duo’s synths sit on top of illuminated pairs of women’s legs. Dave 1’s guitar turns into a searing search light, blasting beams across the room. They even play their instruments back to back while blistering through a hair metal solo. In short, the whole thing is incredible fun.

The songs bear the weight of the theatrics effortlessly. What the persona of Chromeo can sometimes mask is the fact that they’re crafters of absolutely masterful pop songs, and cuts from newest album White Women are among their best to date. An early airing of “Come Alive” absolutely soars, and the hooks of bona fide hit “Jealous (I Ain’t With It)” zip across the beats with effortless flair.

If you try and get a semi-objective sense of perspective on the show, however, a small margin of emperor’s new clothes syndrome does rear its head. It is at times hard to tell exactly what Chromeo are actually doing, musically speaking. The looser, more spacious numbers like “Over Your Shoulder” highlight this best: it’s an essentially live arrangement, but nobody’s playing so much as a guitar. If you wanted to be cynical, you could call it karaoke.

But the quality of the songs and the spirit of the spectacle win the day, turning even the seated areas of the venue into standing dance parties. And it’s not like they’re just going through the motions across a backing track all the time either –songs like “Tenderoni” reconfigure their arrangements as they unfold, moving into deep, physical synth runs in its back third. When you couple this huge, electro-pomp with the invigoratingly goofy stage presence of people who actually choose to call themselves Dave 1 and P-Thugg, you’ve got a pop concert every bit deserving of the venue of this size.